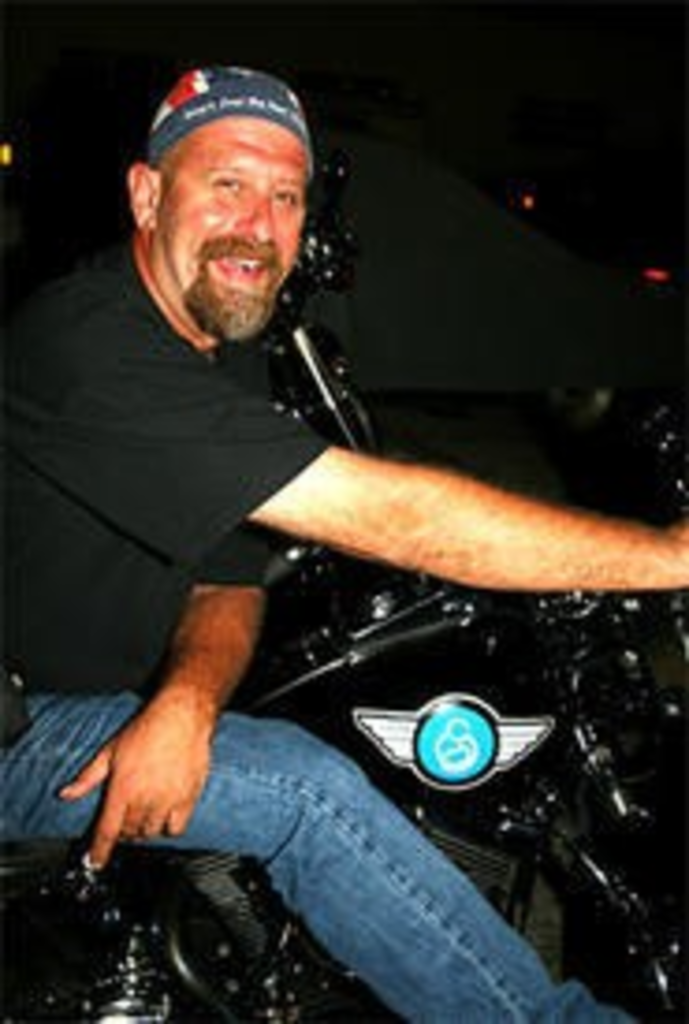 There I was at 1:46 a.m. in a Grandview strip mall, watching a guy ride up to me on a horse. Yep, horse, as in neeeiiigh, clip-clop-clip-clop.

How did I get to this point? How did I get to Grandview, considering that I grew up on the edge of the school district but never actually hung out there? It started on a Saturday night, when I made a two-bar tour of the area and its apparently horse-friendly strip malls.

The night began when I met Research Assistant Jenni at One Block East. Located near the U.S. Highway 71 ramp on Blue Ridge Boulevard, the rectangular-shaped building resembled a roadhouse. Concrete bumpers blocked off space out front for motorcycles, and a host of biker guys congregated on its lattice-fenced wooden deck.

The place was less crowded than its seemingly full parking lot implied. A funk-and-soul cover group called Tut and the Soul Sensations Band (TSSB) was rocking a good rendition of “It’s Ladies’ Night.”

We sat at the bar and ordered the $2.50 bottled beer special. The atmosphere and décor fell into the divey category. On one side of the bar was a claw machine filled with stuffed animals. Near that was a large, wood table filled with TSSB friends and family. A wood dance floor abutted the stage. Over on the other side of the bar were dartboards and two pool tables.

After listening to the band for a bit, we went over to talk to 22-year-old Tanya and her friend, 28-year-old Teyonia. Tanya proudly showed off her shirt, which read “Ed’s Posse.” She explained that Ed was not only the head of security but also the country’s No. 1 fundraiser for Bikers for Babies. She pointed him out, so we followed him onto the quieter deck to talk.

Ed, an older guy sporting an American flag bandanna, said he’s been the top fundraiser for the past three years. “Babies are the purest of souls, so why not try to help them?” he asked. He said the night was a Bikers for Babies fundraising benefit and he and his friends had been collecting money from street corners.

Sure enough, a biker soon came in and dumped a pile of cash on a wood table from a black studded bag that held the collections. He and others started counting the money up. By then, it was close to 12:30, and more people were flooding in. Among the newcomers was a bachelorette party, which excited a trio of meat-markety guys in their late 20s or early 30s who sat near us. “Who’s the ringleader?” asked one as he stared lustfully at the bachelorettes. That was our cue to leave.

We drove several blocks down the street to the strip mall that held Pete’s Place. It turned out to be a 25-and-older upscale place. The owner, a petite woman with curly hair, was watching the door. After we walked in, she went back to scolding a guy whose polo shirt was untucked and threatened to kick him out if she caught sight of its hem again.

The bar was really cool. The walls of this large room were painted lavender and turquoise. A huge screen on one wall showed the Seahawks-Vikings game, and near that was a nook with the pool tables. A black-and-white-checkerboard dance floor occupied one side of the room, and above that hung a disco ball and four swaths of fabric drapery.

We made our way to the bar, where we got $6.50 rum-and-Cokes. The place was crowded with a semi-dressed-up crowd. The women sported lovely cocktail dresses, and the guys ranged from blazers to polo shirts. We spotted a table of people in yellow Western shirts and cowboy hats. One member of that group — a woman named Annette — said they’re the Down to Earth Riders. It’s a six-month-old nonprofit that helps kids get out of the inner city by teaching them to ride horses. They’d just been to the Hilltop Rodeo.

Annette went to dance, and Jenni and I decided to check out the patio. On our way there, though, we were summoned by a group of women who said their names were Miss B, Miss D, Miss Diva and Miss Kitty. When Jenni took their picture, Miss Kitty lowered her cleavage-baring top down a fraction more and exclaimed, “Girls gone wild!”

I asked how they knew each other. “We’re sex partners,” Miss D said with a straight face. Actually, they’re friends from Central High School. Talk soon turned to Miss Kitty’s breasts. “They’re real, and I didn’t pay for them,” she said.

When the lights came up, a zydeco-sounding song came on, and a group of the Down to Earth riders started line dancing. After the dance, we were all herded out. The owner stood by the door, calling out to everyone, “I really pray you get home safely.”

Jenni and I were walking out when one of the cowboys — a guy named T.J., aka New York City — said his horse was actually in the parking lot. He pointed to a trailer at the end of the lot and offered to bring her to us. T.J. soon appeared atop Rose, a gorgeous and sweet brown horse. T.J. decided to pull the truck and trailer over to us, so while he went to get it, Rose patiently stood, untethered, in the lot. Then another rider pulled up in his truck, and three horses looked out windows of its trailer.

After I drove off, I didn’t want to make the trek back downtown, so I decided to crash at my parents’ house. I snuck in and got a snack from the fridge. It was just like high school all over again — only better, now that I had discovered the randomness of Grandview watering holes.