Toughies, Berwanger, The Get Up Kids, and more of the best in local music videos 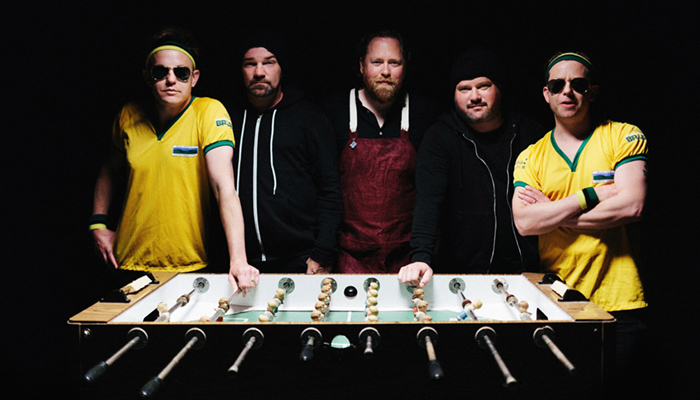 It’s fucking hot. And humid. And everything’s sweaty and gross. Don’t go outside. You’ll melt. Watch these videos because they’re chill as hell, and you can do that while hiding in your basement, trying to avoid the sun until sometime in mid-September. The tracks from Toughies, Berwanger, and Mikal Shapiro are sunny enough to give you a tan, anyhow.

The pair formerly known as CVLTS isn’t really a local band anymore, but they started here, so we’re still claiming them for the purposes of sharing this hypnotic new video. It’s basically just the band’s logo moving slightly while the music plays. The track comes from a lathe-cut 7-inch — it has, unfortunately, already sold out — from Swedish label Possible Motive. You can stream it via Soundcloud while you wait for CLVTS next full-length later this year.

We could share Sofar Sounds videos until the end of time, and that goes double for Lawrence’s sunniest pop band, Toughies. This live performance features the previously unrecorded “Straight Face.” It’s goddamn delightful.

Toughies are at Tonganoxie’s Myers Hotel Bar with La Guerre, Claire Morales, and Kat King on Friday, July 13. Details on that show here.

Berwanger’s third album, The Star Invaders, has been out for over six months now, but I appreciate the long tail on these music videos. This two minutes of claymation insanity manages to up the Mario-Paint madness of “Horror Show,” which is no mean feat. The band’s been quiet for the last few months, aside from a flurry of shows at the beginning of June, so let’s hope this indicates we’ve got some more rock on the way.

Lawrence’s new instrumental electronic project, Palo Zolo, dropped another video, and while it’s just as hypnotic as last month’s “House Plant,” this is a whole different thing. The video itself is a series of rising and falling sound waves moving toward a rising sun, and then there’s a body floating in space, and it is very late 1980s, and I love it. The song’s more Zombi than M83 this go-round, so at this point, it feels like frontman Eric Davis and I have a very similar record collection. I can’t wait to hear what’s next.

Three years on from Mikal Shapiro’s The Musical, the singer-songwriter released her follow-up, The Musical II, at the Buffalo Room at the end of last month. The first single from the album, “Everybody’s Baby,” got its release a week beforehand with this video. It does that thing where it cuts between a live performance and the singer dancing and being goofy, and it’s absolutely charming. The loose, melodic number dances its way out of the ’70s Laurel Canyon scene and never looks back.

You can buy The Musical II via Shapiro’s website.

A hip-hop R&B jam that sees Joey Origami reflecting on an obsession he has with an ex, “Bad Example” dances on the edge of the “I can make you love me” genre of songwriting. However, the musician’s lyrical acknowledgment that the behavior is unhealthy and toxic to himself and those around him is winning in its introspection. The video from director Bristol Nite gives the sense that Origami might have a chance to break the cycle by the time it ends, too.

As if the Architects and Brandon Phillips & the Condition weren’t enough, the Phillips brothers (Adam, Brandon, and Zach on drums, guitar, and bass, respectively) have formed another band with vocalist Julia Berndsen (late of the Late Night Callers). It’s going by the name Other Americans, and upon first glance, the quartet’s electronic-tinged indie is a far cry from what the Phillips have done in the past.

Other Americans’ self-titled EP is out June 29.

The Get Up Kids, “Better This Way”

After a week and a half of build-up via social media at the end of March, the Get Up Kids announced that not only did they have a new EP, Kicker, on the way this year, but they’d signed to indie stalwart Polyvinyl to put it out. It’s out next Friday, June 8, and if “Better This Way” is any indication, the band’s been reinvigorated and energized.

The video is a pretty great tour of downtown Lawrence, and the foosball game features a veritable who’s who of downtown employees, as well. I think half the staff of the Bourgeois Pig and their significant others make an appearance at some point.

The Get Up Kids play Buzz Beach Ball on Friday, July 27, at Providence Medical Amphitheater. Details on that show here. You can pre-order Kicker here.

Are you a local musician with a video to share? Email nicholas.spacek@gmail.com