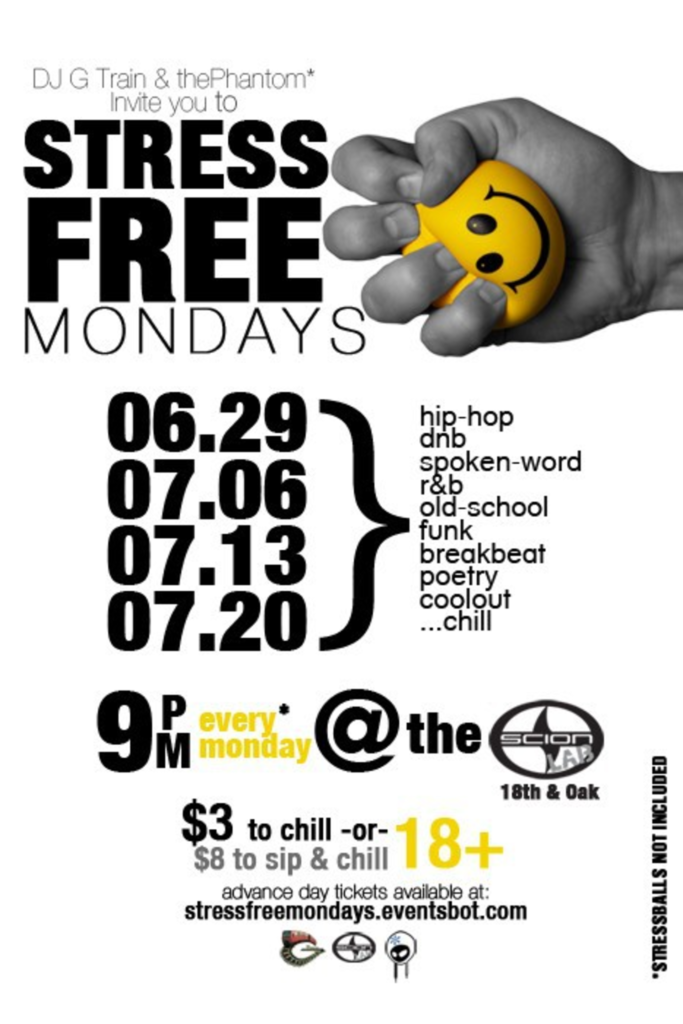 DJ G-Train and thePhantom* have teamed up to start a new night at the Scion Lab behind the Crossroads at Grinders (on the east side of Oak, south of 18th). On Mondays starting tonight through July 20, the doors will open to a special theme. It’s 18+, $3 cover. If you’re of legal drinking age, bring an additional $5 for a bottomless cup.

According to thePhantom* tonight’s theme will feature a celebration of Michael Jackson, with Reach demonstrating how to moonwalk. Next week, local poets will share their verses. On July 13, Royce Diamond and Smoov Confusion will perform. The last night of the series, July 20, will feature an MC and/or DJ battle. ThePhantom* — who did not actually say that Reach would show people how to moonwalk tonight or even be there, period (I made that up) — said the following.

You might ask what sets this apart? Well, frankly, I’m sick of the usual hip-hop show. I’m pretty sick of going to a show to see usually the same people perform the same songs and always being demanded to come to the front of the stage to listen. What we’re doing here with Stress Free Mondays is putting the focus on those who attend. We’re providing complimentary stress balls and for the first week, the 29th, we’ll even have a smiley pinata for someone to destroy filled with candy! All in the spirit of being stress free.

For his part, G-Train had a rather stressful weekend. On Friday, the DJ sent out an e-mail to friends asking for help replenishing his spin-able music supply, which had been imperiled by a malfunctioning external hard drive. His buddies Sku and Shad came through in time, however, and G reports that he’s all set for tonight.