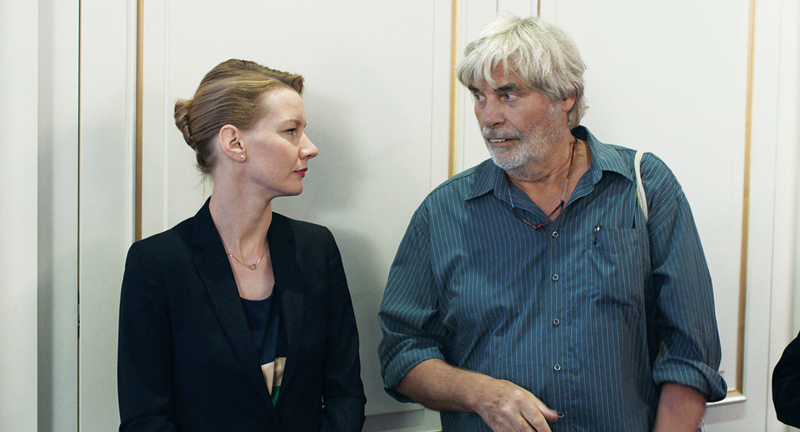 In Toni Erdmann, the German-Austrian movie nominated for the Best Foreign Language Film Oscar, a desperate and lonely father tries to jolt his careerist daughter out of what he sees as her soul-destroying complacency. Sounds heavy, right?

Writer-director Maren Ade’s film is a tragi-comedy, yes. It’s also beautiful and unique — art of a high order. In its portrayal of stark philosophical differences, the movie speaks to how people across generations see, and find meaning in, modern life.

Yet it also wields a light, absurdist touch. So, for instance, there’s no rousing speech when soon-to-be-retired music teacher Winfried Conradi (Peter Simonischek) lectures his adult daughter, Ines (Sandra Hüller), on what she should consider important in her life. Instead, the playful ex-hippie sets about imparting his lesson by invading her work life, playing a ridiculous character with fake teeth and armed with a whoopee cushion.

Toni Erdmann is bookended by parties, though for Ines such events are never fun. Rather, they are compulsory extensions of her work as a global corporate strategist. Ines is home in Germany for a couple of days when she sees her father briefly at a party, an occasion she spends pacing around the backyard on her mobile phone, a conspicuous display that does not go unnoticed.

Soon she’s in Bucharest, at her office building, and she sees her disheveled father in the lobby, wearing sunglasses and fake teeth, as she escorts some clients. There’s no public acknowledgement from her of who he is, but she returns later to be polite and offer pleasantries. When they are alone, little is spoken, and they assume their roles: Parent who doesn’t want to bother, daughter who treats Dad as an annoyance. They part ways the next day, and things proceed to get weirder.

Winifried essentially begins to stalk his daughter. He decides to investigate her professional life by integrating himself into it — as Toni Erdmann, a freelance professional life coach with unkempt hair and awful teeth. (He also poses as a German ambassador.) When Ines’ clients start to believe that this ridiculous man is for real (or at least tolerate him out of curiosity), it brings into sharp relief the sexism that she deals with every day.

In the presence of someone who knows her so completely, Ines is exposed. No longer the powerful businesswoman, she’s someone who’s just playing along to get ahead. When Winifried plays pranks on her, it’s awkward and often very funny, but these moments aren’t the ones that ultimately stick. Instead, it’s the scenes in which we see her trying to appease her colleagues — discomfitingly pedantic exchanges, the banal back-and-forth that other movies leave out. In these moments, Ade skewers the pretense and corporate fakery of professional life (and not just in Europe).

For all the cringing we do as these scenes play out, they’re key to the astute humanism that makes Toni Erdmann such an astonishment. Ade shows us unexpected tics of human behavior, staying constantly attuned to what’s real and what’s false. Ines’ job is about as anti-humanist as you can get — she helps global corporations find ways to cut costs and grow profits. It’s a job her baby-boomer father can’t abide. “Are you even a human being?” he asks her at one point. It’s the most direct, though hushed, confrontation in the film. He doesn’t want to ask, and he may not want to know the answer. This is the line that Ade walks, and she toes it perfectly.

Notwithstanding a main character who’s often wearing wigs and gaudy choppers to get a rise out of people, the humor in Toni Erdmann is actually quite subtle. Ade is making us privy to a joke between father and daughter, and this intimacy makes the film’s observations not just potent but thrilling. With its handheld camerawork, its use of natural light, and its keen, unaffected performances, the movie avoids being the saccharine earnestness of Hollywood movies about family.

You may have read that Toni Erdmann is 162 minutes long, and I concede that it gets off to a slow start. Yet the more time you spend with Ines and Winifried, the more engrossing the film becomes. This is especially true as the pair evolve from enemies to co-conspirators in increasingly awkward public settings that could prove dangerous to her job. The movie keeps gaining steam and saves its best surprises for the end — a final wind-up that’s hilarious and heartbreaking in almost equal measure.