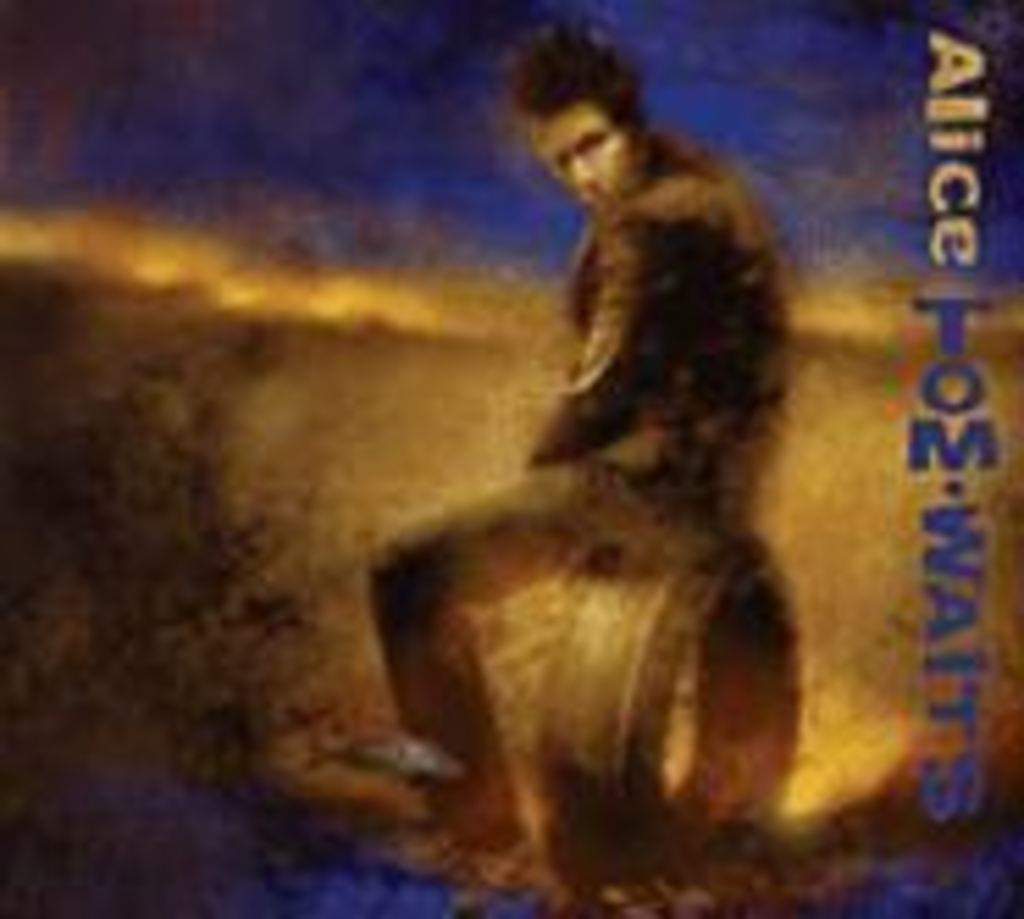 The stage companion to Tom Waits’ Alice has yet to reach our shores, but it’s hard to believe it could fulfill the promise of a playwright-musician marriage better than the album. Kathleen Brennan has influenced Tom Waits’ music ever since they met in 1980, and though only two albums have been actual stage musicals, all of them have used skewed arrangements and a multiplicity of characters.

But there are differences: 1985’s Rain Dogs and 1999’s Mule Variations are pop albums straining to embrace everything from bizarre opium-den exotica to guitar rock, while Black Rider offers consistently dense atmospherics without such a variety show. Its diverse styles woven together with a single magically nocturnal gestalt, Alice‘s fifteen-song cycle represents the best of both worlds. The title track and “Flower’s Grave” are as jazzily sentimental as anything on Waits’ 1973 debut, Closing Time, and other tunes are as wild as anything he’s done on subsequent releases. “Everything You Can Think” is a percussive skeleton march along the lines of Rain Dogs‘ “Singapore,” and the convulsive jazz number “Kommienezuspadt” sounds like a Tourette’s syndrome-stricken version of the Andrews Sisters’ “Bei Mir Bist Du Schon.” Through some gentle spells of pump organ, vibes, brittle strings and brass, piano and Stroh violin (violin with a horn attached!), Alice balances perfectly the sparse approach of a chamber ensemble with the extravagance of a cinematic soundscape.

It’s not only the arrangements that weave Alice together: The album, a loose tribute to Lewis Carroll, maintains a subtle storybook theme in the lyrics. It’s in the allusive tall tales of “Everything … “: We’re fighting our way up dreamland’s spine/With red flamingos and expensive wine. “Edward,” about a boy with a female face on the back of his head that eventually drives him insane, evokes Heinrick Hoffmann’s creepy mid-nineteenth-century children’s book Struwwelpeter. Then there’s the pure storytelling of “Table Top Joe” — over honeyed, Dixieland jazz — about a boy born without a body who’s nevertheless a dancin’ fool. Though the stories are all sung in character — the barfly crooner, the chanting underworld tour guide, the crazed cabaret emcee — Waits’ vocals never feel strained or affected. Alice adds up to a musical picture book so colorful it seduces your imagination into creating scenarios for which no stage set could do justice.

On the other hand, a theatrical presentation might not hurt Blood Money, based on the 1837 German play Woyzek. For one thing, it contains not one but three “Singapore”-like cartoon death marches, with little musical or thematic difference among them. Lou Reed’s “Coney Island Baby” deserves a song that lives up to the romance of its title, but Waits’ eponymous Tin Pan Alley ditty is a touch too cute — you want to hang it on the wall like an old piece of sheet music. That said, “A Good Man Is Hard to Find” has some of the most elegant couplets in the career of this master coupleteer: How far from the gutter, how far from the pew/I’ll always remember to forget about you. And though quaintly stylized, “Coney Island Baby” glimmers with romantic poetry (All the stars make their wishes on her eyes) worthy of “Downtown Train.” Despite its relative pallor in Alice‘s strange glow, Blood Money is good enough to make listeners wonder how Waits and Brennan, the purportedly happy couple, have thwarted the muse-stifling scourge of domesticity. Then again, they always were a little different.