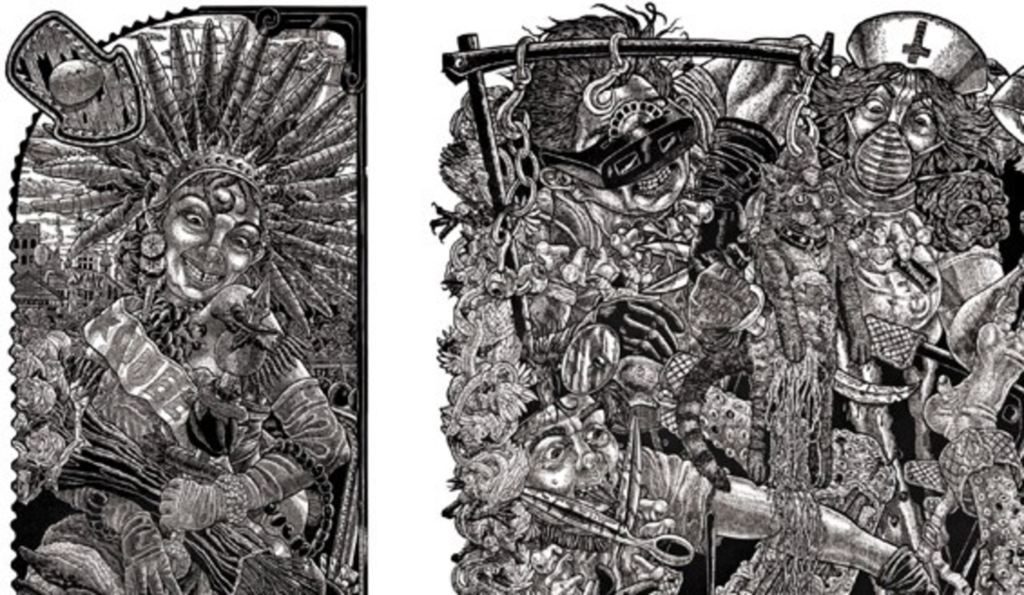 Garden of Earthly Delights,” a busy triptych by batshit 15th-century Dutch painter Hieronymus Bosch — a poster of which your roommate probably hung on her side of the dorm room alongside “The Kiss” by Gustav Klimt and some Totes McGoats crazy M.C. Escher poster — depicts, among other things, man-beast couplings, a dude poking a flower into another dude’s upturned butthole, and a pig dressed like a nun. Edgy, especially by the standards of the Middle Ages. But Bosch probably would have taken one look at Tom Huck’s “Pork Chop Suey — Oinktoberfest” and thought, “Eating pit-roasted cops at a family barbecue? Wham-bam goddamn.”

Bosch’s response still wouldn’t do justice to the grotesquerie of Huck’s woodcut print, part of an exhibit at the Sherry Leedy. The image depicts various barbecue attendees engaged in killing, torturing and roasting small-town cops dressed up like the pigs that Huck clearly thinks they are. A topless woman astride one unfortunate tubby officer wields a chain saw over his head. A mischievous child torments a hogtied Buford T. Justice with a doughnut-baited fishing line. Grinning hayseeds devour meat and entrails while a fat, happy chef in a toque reading “KISS THE COOK” presides. The composition is draped in viscera, fat and gristle, strewn with sausage links and greasy, smiling faces. Blackly funny, it’s the stuff of nightmares and born-again vegetarianism. The piece recalls Bosch, yes, but Huck has been more aptly compared with 15th-century German printmaker Albrecht Dürer and comic-book artist Robert Crumb.

The iconoclastic Huck, a printmaking lecturer at Washington University in St. Louis, grew up in Potosi, Missouri, a town of about 2,700 people and the kind of place where you could dial a wrong number and still have a conversation. Like avuncular radio nuisance Garrison Keillor, Huck draws creative inspiration from his rural upbringing. Unlike Keillor, Huck does not produce cozy, amniotic societal affirmations. His art is concerned with issues of violence, racism, abuses of authority, and people who, as author William Gibson once put it, “don’t know shit about anything and hate anybody who does.”

Take “Late Night at the Racist Rectal Rally.” Against a country landscape studded with flaming crosses, a Klansman mounts a woman in a Pickelhaube helmet, her legs entwined with a viper. A further entwining of racist iconography and sexual imagery: A Nazi woman is erotically asphyxiating her hooded partner from below with a noose. It’s the persistence (and coupling) of race hatred across cultures and hemispheres. The image, like “Oinktoberfest,” is so confrontational that it’s easy to overlook the technical precision and confident style with which Huck executes his art. His delicate drawing verges on the sublime. Because woodcut printing must be planned and executed backward — the image is reversed when transferred from the wood block to the paper — a whole set of head-melting cognitive and spatial-relations capacities is required.

Satirists who lack a light touch are too often called “bomb heaving,” a tired piece of critical boilerplate that really doesn’t adequately describe Huck’s approximately 8-foot-by-8-foot triptych “The Transformation of Brandy Baghead.” It’s a bombastic, ghastly indictment of cultural narcissism, cosmetic surgery, corporate sponsorship and the amoral churn of reality television. “Part I: Beta-Caro-Teen Queen” depicts sashed beauty queen Brandy Baghead borne aloft by melon-headed attendants. She holds a rabbit in her lap, carries a vegetable-skewering scepter and wears a crown made of carrots. In “Part II: America’s Next Top Omelette,” a sinister-looking team of surgeons mars and deforms her body, transforming her face into something resembling a monstrous bird. The violence of this central image, the largest of the three, is bordered with a braid of angry swans, a troubling decorative flourish that again voices Huck’s attention to detail.

Finally, Brandy Baghead appears in “Part III: Skating With the Scars,” pirouetting her gruesomely scarred, disfigured body on an ice-skating reality show while holding a bucket of chicken. The crowd holds up signs with epithets (“SKANK,” reads one) as a panel of judges holds up score cards awarding her with 10s. A fan wearing a chicken mask raises a sign reading “Finger Lickin Good.” The piece is daunting and difficult to take, but there’s a terrible beauty in the gorgeously rendered textures of the fabrics, the brilliant and varied use of line, and Huck’s decorative marginalia.

Ultimately, it is Huck’s technical grace and craftsmanship that elevate a blunt and potentially inartful concept to the level of social satire. Executed by a clumsier artist, the social and political broadsides might seem clichéd. Looking at “The Transformation of Brandy Baghead,” though, it’s hard to say you’ve ever seen anything quite like it.