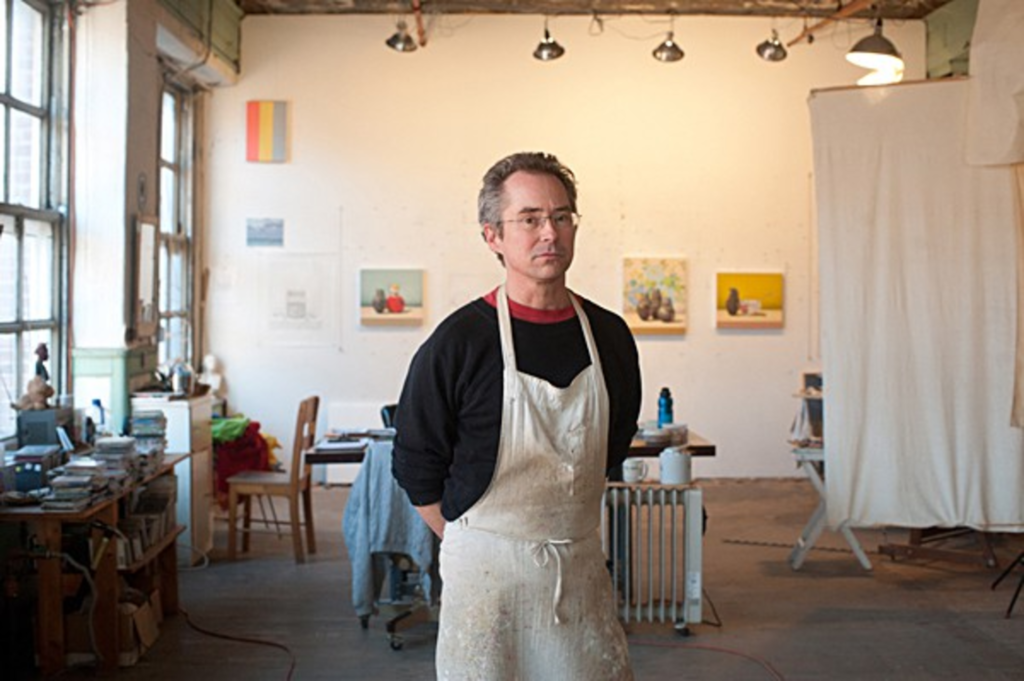 Tom Gregg has been working out of a shabby-chic space in the West Bottoms since 1994, long before the First Friday antiques crawl helped make peeling paint and calculated clutter marquee attractions. Friday, March 9, Gregg leads two tours through the Nelson-Atkins Museum of Art. His talks — at 6 and 7 p.m. — showcase works from the museum’s collection that he finds inspiring. The event is part of the museum’s Charlotte Street Artists’ Walks. The Pitch visited Gregg’s studio last month after he returned from Los Angeles, where his work is on exhibit through late March at the George Billis Gallery.

The Pitch: The bric-a-brac on your studio shelves appear in your still-life paintings. How did you acquire these objects, and why do you paint them?

Gregg: All of that stuff on the shelves in my studio is the result not only of painting still lifes for a long time but also of being a natural collector — although a collector of things that are interesting as opposed to valuable. Having such a large studio allows me to be rather indulgent. I can see something in a flea market, a yard sale, in a Dumpster, or by the side of the road, and if there is even a remote chance I might someday use it in a painting, I will hang onto it. … No matter what the object is, I like it to be familiar, even generic, and somewhat iconic. I try not to analyze this part of the process too much. My choices are usually impulsive and intuitive.

Some of the subjects of your paintings — lemons, a glass of water — seem pretty straightforward. Others, like the knotted-up American flag, could be interpreted as having a deeper meaning. How much control over those interpretations do you try to keep as you arrange and paint the objects?

At this point in my work, there are two basic, though intertwined, lines of thought. In some of the works, such as the lemons with the glass of water, the inspiration is primarily formal in nature: how the yellow vibrates against the blue, how the roundness and repetition of the lemons play against the vertical climb of the water glass, how the reflection in the glass rhymes with the shadow cutting across the lemons, etc. In most cases, I can walk into the studio, look at the objects I have set up to paint and truly be in awe of how beautiful and even profound they seem to be, just sitting there on the table. This in and of itself is already a lot for me to try to fit into a painting.

The potential success of this endeavor can sometimes seem compromised by weighty subject matter that distracts from a more direct experience of the painting itself, so in this case, the more transparent or familiar the objects and the less attention they call to ideas outside of formal concerns, the better. … The paintings with subjects such as the American flag share these same formal concerns but veer off in a slightly different direction. I have also painted grenades, handguns, Disney figurines, pharmaceuticals, and other objects with unavoidable and rather loaded associations. Part of the challenge in these is to seduce myself and the viewer into experiencing the painting, and therefore the objects, on a formal and aesthetic level, despite the fact that it is an image of a weapon or a tacky rubber Minnie Mouse toy. In the painting process, I have to find a way to see past these objects — because of the strong identity of the thing itself, the tendency is to stop there, at a cartoon sort of perception. … I always believe they are just paintings. They don’t mean anything outside of what the viewer brings to them, and I don’t feel that I want to control or limit what the paintings give out or even that what I bring to them is necessarily what someone else should experience.

I saw newspaper clippings of head shots of famous people lying on a table under one of your glass palettes. How does this collection play into your studio practice?

At one point a few years ago, the walls in my studio were almost completely covered by newspaper and magazine clippings, random graphic detritus, flea-market art, and anything else that caught my attention and seemed to fit into the context of what was evolving up on the walls. Some of this graphic stuff would get translated into my paintings, as images or patterns on the wall space behind the still-life objects. I did a diptych of Newt Gingrich overlaid with some Precious Moments angels during his first trip through the media cycle. When my paintings simplified and became more about the color-fields, I felt like all the stuff on the walls was distracting, so it is now all piled up in portfolios and stored in the corner. I have recently pinned up a few things: some safety envelopes, some gift-wrapping bows, and a picture of Ariel Sharon with a grenade cigarette lighter. But I plan to keep it contained. I often think of my paintings as figurative, or even as portraits of a sort, so the newspaper-portrait clippings are a bit of an inspiration. I guess, in a larger sense, my interest in all of this cultural printed stuff springs from a curiosity and fascination with images and visual language and how they are used in our culture.

Why Ariel Sharon and the lighter?

A few years ago, I was inspired to use hand grenades in my still-life paintings. This came about not only as a response to the way terrorism seemed to be dominating this country’s every thought — the George W. Bush administration brought out the political overtones in my work — but also as what I perceived as the post-9/11 reality that we all needed to accept: The potential for violence exists in the most banal and everyday places. I was able to get three different hand-grenade styles, courtesy of Mickey’s Surplus, and have done a number of paintings of them: with a cup of tea, a bunch of fruit, a strawberry milkshake, even a child’s toy. The photo of Sharon, casually smoking, with what looks a real grenade on the table in front of him, seemed to echo the things I was thinking about at the time, and I keep it up there because I’m still drawn to disjointed or oddly juxtaposed ideas.

What about the dried fruit? Former still-life subjects?

Part of the answer to this gets back to having the luxury of a large studio. I have a good friend in New York, also a still-life painter, who has a comparably small, in-his-apartment studio. Due to space limitations, he periodically fills boxes with stuff and puts it out on the curb (where it is picked through by people like me). I can let it all accumulate, even the fruit, which either dries out or becomes some sort of science experiment. I’m sure most of it was at some point used in a painting, and then, instead of rotting, which most of it does, it dried out. Some of it has been around for over a decade, so at this point it seems to be enjoying some sort of fruitlike immortality. I find them to be beautiful and intriguing in their mummylike state of being.

Among the work in the show I have up in L.A. right now are two paintings, which I think of as portraits, of rotten apples. They were apples I had used in an earlier painting, fresh and full of life, but over time they had turned these weird shades of waxy browns and acidic greens, covered with rather surreal and surprising spots and patterns. They weren’t in the plans for my show, but I couldn’t resist painting them, and I know from experience that such beautiful rotten apples are hard to come by; most just turn brown and shrivel up. These paintings will probably be forever in my personal collection, as paintings of rotten fruit are the sorts of thing that other artists respond to, but are a tough thing to actually sell; I’m not sure how many people want an image of decay or a metaphor for mortality on their walls.

There is a stack of art books in your studio with reproductions of paintings. Can you show me a couple of pages you turned to in the recent past and say why you went there?

Often I will take a break from my work and look through some books on painting, to tune up my eyes and in the hopes of some sort of absorption. As someone who paints not only representationally but entirely from direct observation, there is an ongoing and intense dialogue with art history and the tradition of picture making. A year or so ago, if I was stuck in a painting with some specific problem, I would try to find an example where an artist had solved a similar challenge. Lately this has evolved into a more intuitive and open process of searching for what I might call visual “rhymesâ � for what I am working on: images that seem to echo or embody something I am trying to accomplish in the current painting. Among some of the most recent things I have turned to are “The Flagellation,â � by Piero della Francesco, for its amazing all-around crispness and the high, clear tone that the color sets for the painting. Also “The Milkmaid,â � by Vermeer, for the yellow of her blouse and the weight and gravity of it all. One more is a Rajasthani watercolor of Rama and Sita that has a surprising palette of pinks and yellows and greens and is generally otherworldly.

You just shipped an exhibition’s worth of paintings off to Los Angeles for a show at George Billis Gallery. What’s next for you?

I had a show in New York at this same time last year, so with that and this show that is up now, it was a short time between exhibitions for me. Usually there is a weird open space and a sort of emptiness when all the energy preparing for a show is done and over with. I find it best to enjoy this void, if possible, but also to keep working in order to reclaim my studio and painting from the outside pressures that have been hovering over it. I hope to keep the momentum going in the studio but without the focus and pressure that a set exhibition ends up stamping on the work. In general, I have the idea floating around in my head of working on more complex arrangements and more complex spaces, building some hint of a narrative element into the paintings. At the same time, I try not to be too imposing on my work and its evolution but to let the changes come out of what the process seems to demand, so I can’t predict anything, really.