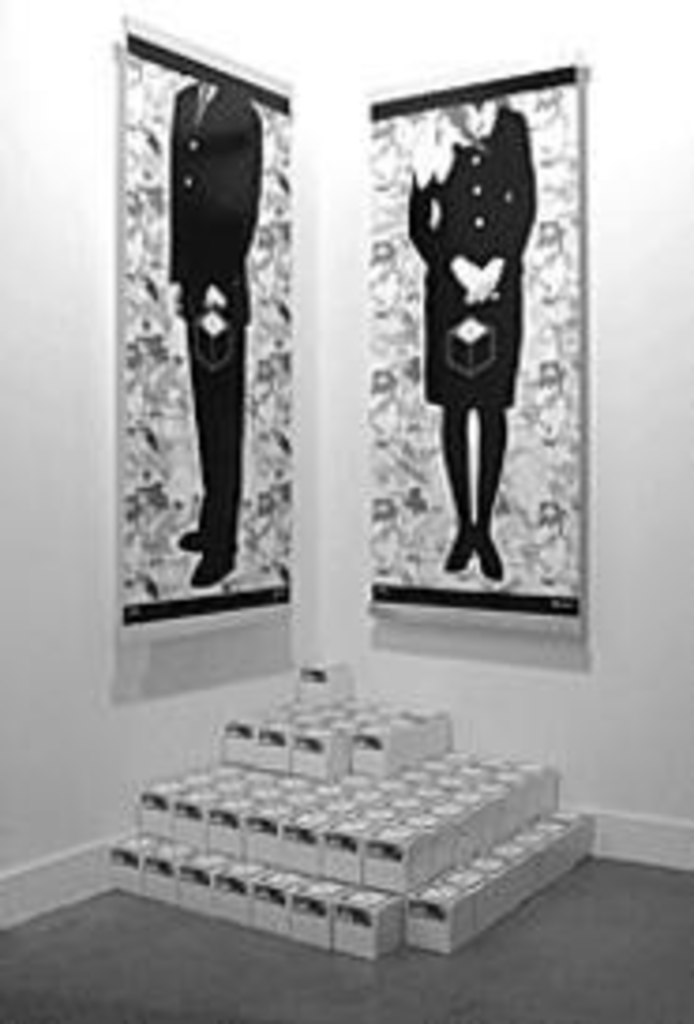 If you’ve seen the sign hanging above the garage that is home to the neo-retro Succotash, it will come as no surprise that long, contentious debates have raged in an attempt to determine whether the character in the logo is a bean or a stomach.

He’s a large, amorphous body to which tiny feet and arms are attached. Think Grimace or a Fry Guy. After going to Succotash with coworkers Doug and Jen around the time of the restaurant’s opening, the three of us became embroiled in conflict. Was Succotash Guy a bean? Was he a stomach? Luckily, I had met the designer behind the mystery: Maiko Kuzunishi, the woman who signs her art with the name Decoy Lab, a name visible on menus and calendars as well as on gallery walls. Her art is always neat and precise, with swirling banners of colorful detail composed of striking, simple images that swerve around her various canvases.

Back then, Kuzunishi was helping a restaurateur establish her café’s identity. The character on the sign, which Kuzunishi says unequivocally is a stomach, was part of a design package that included menus adorned with rows upon rows of dots in bright colors like fuchsia and orange. “That was more kitsch, sort of like those cute Japanese characters and also being retro,” she says — which makes sense in a chartreuse garage diner filled with Formica.

I e-mailed Doug and Jen to let them know that the debate was over, but they wouldn’t accept defeat. Still a mystery, they claimed, despite what Kuzunishi herself had said.

But even more mysterious is one of Kuzunishi’s latest projects. Right now, in Spool — a little boutique filled with silk-screened T-shirts, felt flower pins and paper handbags — she’s selling small, white cardboard boxes for $5. Boxes that you agree not to open until you get home.

Only a couple of rows of Kuzunishi’s boxes remain on the shelves. You debate with your inner adult. It’s only $5, you decide, and the boxes look intriguing. The same boxes appeared at the Paragraph Gallery a few months back, at its first Kansas City opening. There, they sat in front of two gigantic prints: one depicting a woman in a flight-attendant uniform with a scarf around her neck, the other depicting a man in a generic-looking suit. The way the figures were framed, though, you saw them only from the neck down. No faces on these suits. And hovering in front of the man and the woman were boxes floating in midair, identical to the real boxes Kuzunishi had piled on the gallery floor in front of them.

At $5 each, how could you NOT get one? You take it home. The box is sealed with a sticker label. Some of the writing on the label is in Japanese. Some of it is in English. The English characters spell out “Anatomy of Receptacles.” A red X crisscrosses the lid.

You have to cut through the sticker to open your surprise box. Inside is a crumpled piece of paper. Not wadded up, just wrinkled and shoved into a too-small container rather than inside a flattening frame.

On the piece of paper is a print. It’s a labyrinthine hodgepodge of light, slate-blue and deep, maroonish brown. When you look closely, you realize it’s a big box with a saw blade cutting into it and life-forms breaking out of it — a white bird, some brown leaves. A disembodied face sits atop the image, as though maybe this whole thing is some bizarre representation of a person. Over this image, Kuzunishi has printed three blue squares with X’s through them, dots floating around them like electrons.

Now, maybe you got what you expected. After all, the artist has taken pains to emphasize the receptacle and not its contents.

But then again, maybe you feel like somebody’s playing a mean-spirited joke on you. Maybe you feel like you’ve been tricked into paying $5. When you buy a print, you should be able to hang it on your wall, right? You buy a box because of what’s inside, right?

Maiko Kuzunishi was born in Osaka, Japan. When she was 12, her father’s company moved to New Jersey. Later, it moved to Texas. She became interested in design through gym class — her Texas high school allowed students to take vocational classes for P.E. credit, and Kuzunishi hated gym. She took a commercial-art class so she wouldn’t have to endure being hit in the face with big, red rubber balls.

“I think that commercial-art class I took really meant something,” she says now, a quiet woman with an impeccable sense of style, smoking a cigarette and squinting as she responds to my questions. “Before that, I’m this girl who can’t even speak English, so I have this phobia of speaking to people. This was the first time I found out I could draw really well. It gave me this sense that I was able to do something and I could express myself. I was never a kid who would go out and make friends. Before that class, I was pretty much invisible.

“Whenever I was working on my studio assignments,” she continues, “people would recognize me. It gave me a sense of identity.”

So it’s fitting that design — a profession that revolves around giving clients an identity that comes not from words but from colors and images — would suit the 1998 Kansas City Art Institute graduate.

Kuzunishi says the idea for Anatomy of Receptacles came to her after a design conference in Japan.

“What I took away from it is that previously, I was so concerned about what design is and where I should be that I was limiting myself,” she says. “I was noticing that most of these people express themselves much more naturally. That sort of leads to originality.” That gave her the push she needed to make something more personal —and more risky.

“We’ve got this empty vessel,” she continues, “and what we put inside defines us. If you take that away, what’s left? I was interested in the overall container that holds us, like fashion or the way we describe ourselves.”

She knew that she wanted people to take the boxes home and think about that. “The container is what is important,” she insists. “I crumpled the print to make it less valuable. Usually, silk-screens and things like that are handled really carefully. I just wanted to crumple it.”

The box you can take home is a physical container. But what she means by “the container that holds us” isn’t physical. “Growing up in a town, before you start questioning about yourself and why you do things the way you do things, your mind is sort of limited,” she says. “If you’ve always thought a rainy day or cloudy day is depressing and never questioned why … ” She stops here, trying to find words that will make sense of this. “Rain is just rain,” she finally says. “It’s natural. It just happens. It isn’t anything. You think about it, and it’s not so bad. It’s kind of fun.”

Rain is the container. Is it depressing? Is it fun? Those are contents, and they’re optional. If you strip away the contents, there’s room to take away or put inside whatever you want.

Suddenly, the question of whether Succotash Guy is a stomach or a bean seems less like a joke than like an important riddle. Stomach. Bean. Argh!