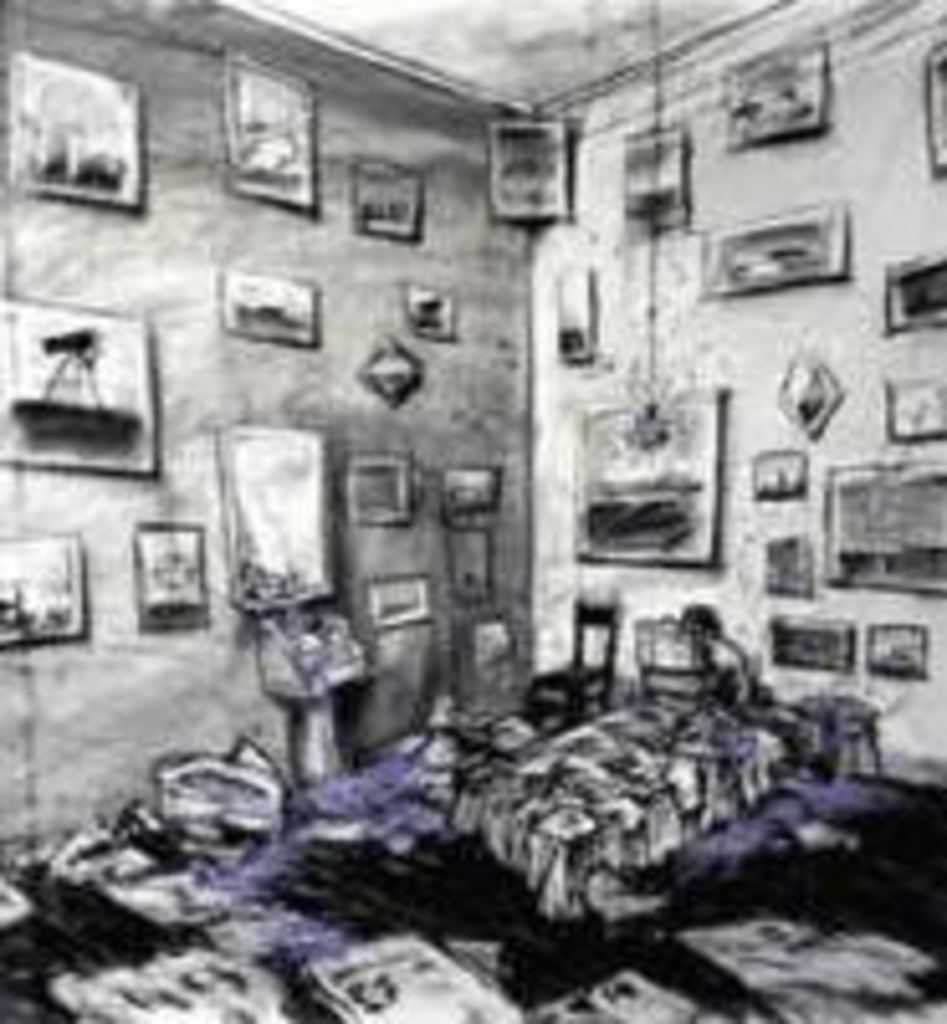 In his video works, Johannesburg, South Africa, artist William Kentridge examines the fuzzy line separating an individual’s interior and exterior worlds. Kentridge conveys his country’s deadly history of apartheid poetically and subtly through the dynamic art form of animation. In the two films on exhibition at the Nelson-Atkins Museum of Art, stories unfold through a collection of loosely connected, haunting and uncertain images, climaxing in sudden explosions of violence.

Felix in Exile and History of the Main Complaint are two in a series of eight hand-drawn films that Kentridge began working on in 1989; he finished the series in 1999 — Nelson Mandela’s last year in office as South Africa’s first democratically elected president. From an aesthetic view, the two films, neither longer than nine minutes, are rudimentary charcoal drawings. If it weren’t for their noticeable political undertones, they could be images borrowed from a child’s picture book.

Felix in Exile (1994) concentrates on the lonely, isolated and artistic character of Felix Teitlebaum, a middle-aged white man who lives in a bare hotel room. Felix is a silent, almost anonymous observer; sometimes the viewer sees only his back or his profile. But he’s obsessed with Nandi, an African woman in the distance. He watches her through his window — which also serves as a mirror — as she looks at the stars through telescopes and astrolabes and other navigational tools. More important, she draws pictures — a lot of them. They all find their way to Felix’s room, flying in through the walls and windows like lost birds, collecting and crowding Felix with her essence. In this anonymous but personal way, a relationship develops between the two.

Then, in quick edits, Nandi’s constantly observed sky turns dark. A soundtrack conveys the sad tones of a song, part vocal lamentation, part chanting, eerily accenting the shock of Nandi’s murder, which is symbolized by water that runs red. Felix is all alone again, standing in a small pond on the open landscape. Outdoors, Nandi’s body is covered by the land — a makeshift grave as unrecognizable as the hills that surround it.

History of the Main Complaint (1996) deals with another isolated person, the capitalist, pin-stripe-suited, bedridden Soho Eckstein. Again, Kentridge builds tension with somber vocal music murmured in prayerlike sonority. Soho, who resembles Kentridge, lies comatose in an empty hospital room, his mouth agape as he undergoes examinations of body and mind. Soho’s pelvic area transforms into a handstamp and a typewriter, accruements of his bureaucratic, capitalist life. A growing number of doctors, who also resemble Kentridge, check and recheck the patient with stethoscopes, and the scene dissolves into a pleasant dream — or memory — as Soho drives along a country road. Soon, though, violence erupts as hands and feet beat and kick an anonymous body. Documenting the brutality are marks on a skull’s X-ray.

With their equipment, the doctors examine Soho physically — at the same time, though, he’s unprepared to examine himself emotionally. When Soho accidentally slams into a body with his car, violence yields understanding. Awake from his coma at last, he’s face to face with apartheid. Dramatically, the hospital bed curtains part to reveal Soho back at his day job, answering phones, using his handstamp forevermore, just as powerless and unable to control his circumstances as Felix.

Through this examination of what separates peoples’ interior and exterior worlds, Kentridge questions the individual’s responsibility to community and to self. Understanding the seismic political shifts occurring within South Africa adds meaning to these films, but they also exist independently as unique, reflective and thought-provoking works.

Viewers’ tolerance for ambiguity — and for considering the deeper political analogies playing on the screen — will determine their enjoyment of Kentridge’s use of the medium as well as the curious, revealing narrative of personal and public tragedy.