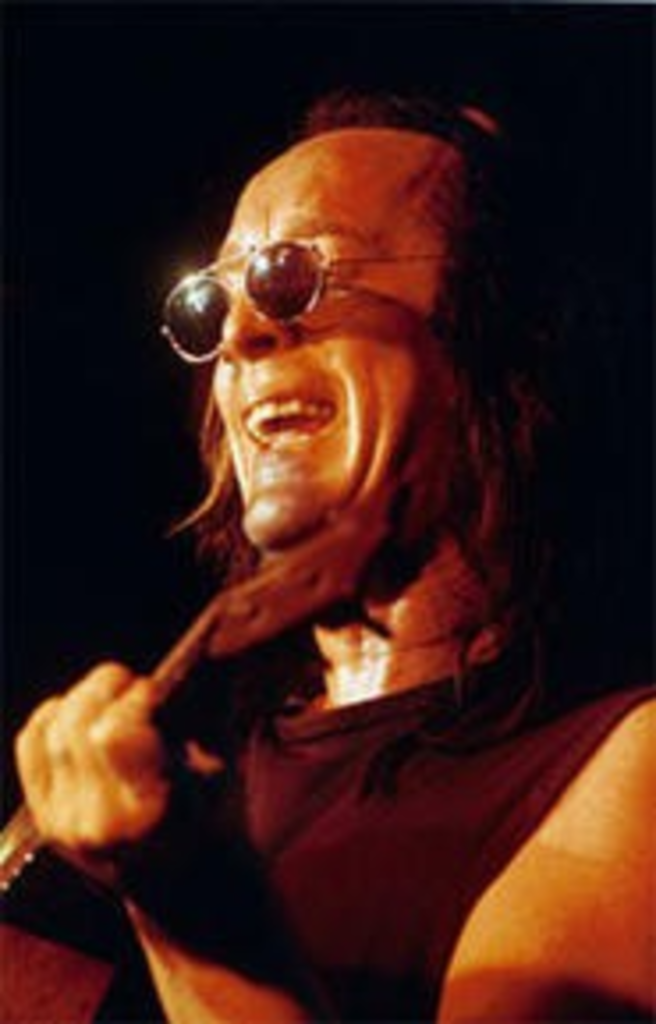 It’s not as if Todd Rundgren is God or anything — that title is reserved for Eric Clapton — but for a lot of the baby boomers in attendance Friday night, his appearance at The Beaumont Club was akin to the second coming. Rundgren’s three-piece band put in a 90-minute set of often-obscure tunes, with a few hits sprinkled in to whet fans’ appetites. Rundgren revealed how omnipotent he really was with virtuoso-like guitar noodling and soloing throughout the eclectic and upbeat proceedings, all while looking remarkably like a skunk with his all-black clothing and shocking black-and-white-dyed hairdo(n’t).

The crowd fared little better, fashionwise. Sure, Todd was sporting a black muscle T-shirt with no actual muscles beneath and a remarkable lack of pigment for someone who lives in the sunny state of Hawaii, but at least he and his band avoided the dreaded mullet haircut worn by nearly every forty-something rocker-in-Dockers in attendance. Aviator sunglasses with Blu-Blocker lenses were also distressingly prevalent, with one elderly gentleman going so far as to pin a white granny-like string around his pea-size head to keep his shades from slipping. Judging by the appearance of the assembled throng, Rundgren must be the king rocker of aging freaks and geeks everywhere.

The set seemed designed for the fanatical Rundgrenite, as most of the songs were alien to all but those in the V.I.P. section that was composed of card-carrying members of Rundgren’s Internet-based fanclub, Patronet. While these happy few sang along with each selection, the rest of us weathered a solo ukulele version of “Bang on The Drum All Day” that was like Don Ho plucking his way through “The Lion Sleeps Tonight.”

The rest of Rundgren’s set sounded like early-’80s Cheap Trick, before they became a sucky ballad band dressed up with Steely Dan-style sheen. His tunes combined new-wave aesthetics with Beatles melodicism. It was classic rock with a cutting edge, which is, of course, an oxymoron, but so is Rundgren’s entire 30-year career.

The first encore brought out such well-known Utopia songs as “Hammer In My Heart” and “Open My Eyes,” appropriate selections given that Rundgren’s Utopian bass player, Kasim Sulton, was on board for this tour. Rundgren gave this scary crowd of fifty-something guys and their thirty-something girlfriends something to which they could shake their behinds, and he kept them feeling as if they were still on top of the world.