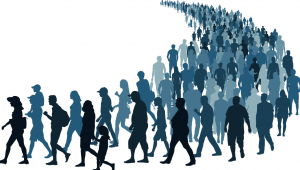 This story was supported by the Pulitzer Center, and is published in partnership with The American Prospect, prospect.org. Brittany Gibson is a writing fellow at the Prospect.

Many people know St. Louis as the geographical focal point where the Black Lives Matter Movement first caught the nation’s attention. After 18-year-old Ferguson resident Michael Brown was shot and killed by police officer Darren Wilson in the late summer of 2014, residents took to the streets to demonstrate their outrage with the system and to grieve their neighbor’s death.

Brown’s body laid in the middle of the Canfield Drive for four hours, and in that time anger brewed, adding to the collective grief over the numerous fatal police shootings that disproportionately target black men across the United States. Brown’s death started a lasting national conversation about police racism and brutality; and in St. Louis, it started a renaissance of the city’s history of organizing, activism, and engagement in politics.

The following weeks of mobilization reignited groups that had long been organizing in St. Louis, as well as starting new groups and engendering a wave of enthusiasm to run for public office. “It started really through my Ferguson activism because I was already a nurse, already pastoring, so my boots-to-the-ground work, I had already been doing [it],” says Cori Bush, who is running for the House of Representatives in this current cycle. “But it wasn’t until Michael Brown was murdered. I saw how our politicians, that I thought would stand up for us and represent us, didn’t show up for us for the most part.”

Bush has company, including the new Attorney General Wesley Bell, Circuit Attorney Kim Gardner and many more who came out of the Ferguson mobilization to win political office. They’ve been bolstered by the swelling of voting rights groups, working to improve civic participation. But in St. Louis city and the larger St. Louis County that surrounds it, organizers have had to deal with a harsh Voter ID law, as well as the socioeconomic and cultural obstacles to get the public to the polls.

The County’s complex local government system (there are 88 different municipalities in St. Louis County) combined with laws disproportionately affecting the poor and minorities,  meant that civic engagement for a lot of people often came down to standing in court with tickets, fines, and fees, says Nicole Hudson, Assistant Vice Chancellor at Washington University’s Academy for Diversity, Equity, and Inclusion. Hudson worked on the Ferguson Commission Report in 2015, an investigation called for by Missouri Gov. Jay Nixon to study the motivations behind the mobilization after Brown’s death and make policy suggestions.

Hudson says that she’s seen the relationship that locals have to politics change since the Ferguson movement, as everyday people have become more motivated to have their voices heard.

“What I have observed post-Fergusson has definitely been more engagement for everyday people, and I think that comes from the moment itself, in the four hours that Mike Brown laid on the ground and people reacting to that. It became a gateway to people basically say, ‘enough,’” says Hudson. “And not just about police and citizen interactions, but about our civic interactions, the way our government interacts with people on a day-to-day basis.”

Although this new wave of political engagement isn’t unique — nor is the issue of police brutality — civic participation in St. Louis comes with its own historic obstacles. Missouri didn’t have Jim Crow laws as the South did after slavery was abolished, but segregation was implemented in every institution except public transportation, the results of which can be seen today in the county’s housing and industry. Some residents refer to the very visible difference in communities as the Delmar Divide: on one side of Delmar Boulevard there’s a Whole Foods and a huge shopping center, while on the other there are payday loan shops fronts and some black beauty shops.

“We didn’t have any Jim Crow laws, but we had Jim Crow just as strictly enforced as it was in Mississippi, Georgia, Louisiana, or Alabama,” says historian Gwen Moore, Curator of Urban Landscape and Community Identity at the Missouri Historical Society. “Blacks had so much to contend with in this city that was really very restrictive. I think a lot about, ‘Can you imagine what it was like being black and living in 1920, 1930, 1940, 1950, 1960?!’ … that’s a long time to live under this heel of racism and discrimination.”

The distance between people’s lived experiences and the letter of the law left African Americans in St. Louis in a grey zone during the Jim Crow Era. And when it came to voting, Moore explains these socioeconomic factors played a role in whether or not people made it to the ballot boxes. Over the generations, a pattern emerged characterized by low voter participation and a lack of faith in the political system.

Although in recent years black voters have become the second highest group to turnout to vote, according to a study from the Brookings Institute, this measure tallies the share of registered voters who actually vote, and does not take into account how voter suppression laws and voter disenfranchisement disproportionately affect African Americans. A precise count of African Americans who were prevented from registering to vote through election commission bureaucracy, purged from the voter rolls, or disenfranchised because of a past felony conviction or fines and fees has been harder to come by – but the number is not small.

“We have not been a country to embrace democracy when it comes to voting rights,” says Gena Gun McClendon, Director of Voter Access and Engagement, Financial Capability and Asset Building initiatives at St. Louis’ Washington University. “There is no culture of voting. It doesn’t exist; and if it does exist, it exists individually. I’m active in voting because I saw my mother vote but not because that’s what I learned in school. The only people that have a culture of voting were white men from the start of the country.”

Following the Ferguson movement, many activists from outside St. Louis expected significant increases in voter turnout. The municipal elections of April 2015, was the first test of this anticipation. The election also preceded the enactment of the state’s Voter ID law by the Republican-controlled state legislature, which would be passed the following year. Voter participation in Ferguson increased to 30 percent in the city council race — more than double than the Mayor’s race the year before. In the ward where Michael Brown’s family lived, 19 percent of registered voters participated.

The increases in turnout were not as dramatic as outsiders may have hoped. Bush says those expectations may not come to fruition even in this year’s presidential election. Despite the national conversation on issues of police brutality, racism and voting rights, the culture of voting has not transformed in the area’s underserved communities.

“There is still some level of trauma and pain there,” Bush says, of Ferguson specifically. “Seeing how our elected didn’t stand up for us. People losing jobs, people losing homes, people going to court and not having assistance, just so many things. There are still a lot of people that feel this thing [politics] is not for them, they’re not there yet … It’s going to take some time. Before Tuesday, I would say no, [increased turnout] is not likely.