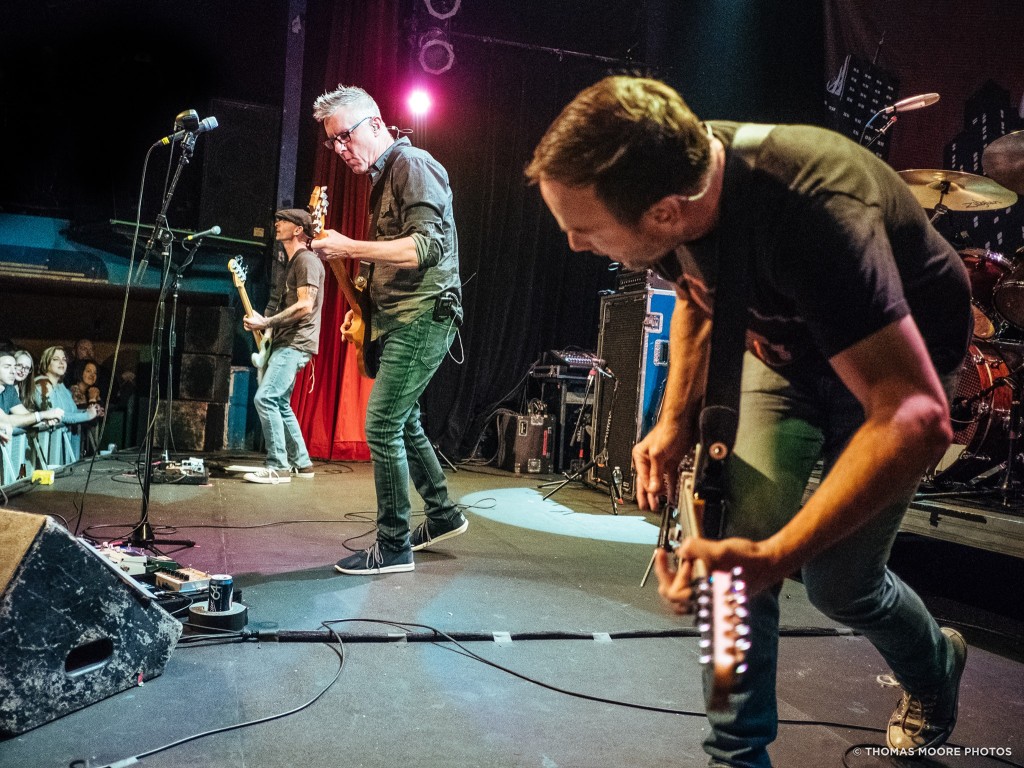 Anyone who’s ever listened to ’90s alternative knows “Possum Kingdom” by Texas rock ‘n’ rollers the Toadies. It’s from their 1994 full-length debut, Rubberneck, which the band is playing in its entirety to celebrate its 25th anniversary. The fact that the anniversary is closer to 30 than 25 is something on which you can blame Covid, but it’s still nevertheless worth celebrating. We reached out to Toadies’ guitarist Clark Vogeler to discuss his work with the band, as well as his other career as a film editor, ahead of the tour’s stop at Knuckleheads on Tuesday, October 4.

The Pitch: We have talked to a lot of musicians who have worked in film and television, but it’s usually in a musical capacity. Your work as an editor is something a little outside that. What’s it like, being in a touring and recording rock band, while also being an Emmy-nominated film editor?

Clark Vogeler: I’ve been nominated four times, but I haven’t won Emmy. I’ve worked over the pandemic and I just got nominated again, which is nice to know that stuff like that can still happen and it still impresses the parents, which is the main thing. But to answer your question: there was a number of years where I was going back and forth. I would just edit for six months and then jump straight onto a tour, do that for four months, then come back and go straight into editing. What I found was they appealed to different parts of the brain, but the main thing is that they each took the edge off of the other.

If I’m out touring for months and months, I’ve had a whole lot of people around me all the time, and it’s really nice to go sit in an edit bay all by myself and do some creative work. There’s definitely a lot of connections between music and editing, at least as far as how the brain processes it, but the act of them is totally different. I find that I took more naturally to editing than I did music. I had to really kind of brute force my way into music.

How did you come to music?

Later in life, I’ve come to look at it like this: my parents got divorced when I was eight, and my brother and I, right about that time, we discovered rock and roll and in looking back, I feel like music for me took the place of family or home and it really meant everything to me and my brother. Our mother gave us guitars and I really stuck to it, though I gave it up several times–“I’m done!” then later, buy another guitar, throw the guitar, sell that, “I’m done!”–and eventually I learned to stop quitting music, but that’s how I think it was.

My brother and I, we’d go to the mall. He would say, “You buy Van Halen II. I’ll buy the new Zeppelin record and we’ll share,” so it became a world for my brother and I to escape to and you know what? It’s still there for us. He still plays listen music a lot. I still play and listen music a lot and it’s always my happy place, so it’s really fortunate that I actually part-time have a job that pays me to do what I love.

The Toadies are out playing Rubberneck in its entirety. When we’ve talked to other musicians who have gone back and revisited albums in their entirety, the thing is that some of these songs, they’ve never played live. However, you came to the band after that album. What is the process of learning songs that you’d literally never played?

It’s interesting. We were talking about this the other day–when I auditioned for the band, there was maybe half dozen or more guys around Dallas and Fort Worth auditioning, but I was very much in on the Internet at that point in mid-’96 and there was a little bit of guitar tablature on the web, so I was kind of getting kind of private info. I felt like I got a little bit of a leg-up cause I could go, “Oh, this is how they play that.” Even though some of it was just flat out wrong, the internet really helped me learn.

But the main thing is, I was already a fan of this band and that record. I liked the band before the record. They were like the best Pixies knock-off I’d ever heard. Me and my friends loved them, but then Rubberneck came out, they had a new drummer–the guy that’s with us–and all of a sudden, they became this heavy powerhouse. Really their own kind of thing. There are certainly Pixies in there, but he brought in the AC/DC and the ZZ Top.

I was a huge fan of the record at the time, so to get to step into this record that I loved was a real treat as a musician and also to be able to go up on stage and play these songs of this band that I’m now in, but everybody knows and love these songs–that was something I had never experienced before. That, to me, is the ultimate musician’s dream–to be able to go into a room where there are 300, 500, 1500 people that are just out their minds, excited to hear these songs. It doesn’t get any better as a musician on a stage.

Really when we do non-Rubberneck shows, we still play probably three-fourths of the album, because we realize that that’s what most of our fans know. We want to give ’em a good show, so we play all their favorite hits. There’s a couple or maybe three that we don’t play each show, but it’s not like this is stuff we don’t do very often. It has been fun to go back and pick up those other three that are maybe too fast for us to play all the time, like “Mr. Love” and “Velvet.”

It was really fun to put the album in sequence and play it that way, plus the audience really like the first song, which is a pretty fast instrumental. The second song, “Mr. Love”… halfway through “Mr. Love,” the whole room has been activated and they’re jumping around and smiling and it’s just a total blast to do that.

The Toadies play Rubberneck, along with the Reverend Horton Heat performing Liquor in the Front, and support from Nashville Pussy, at Knuckleheads on Tuesday, October 4. Details on that show here.