To feel or not to feel 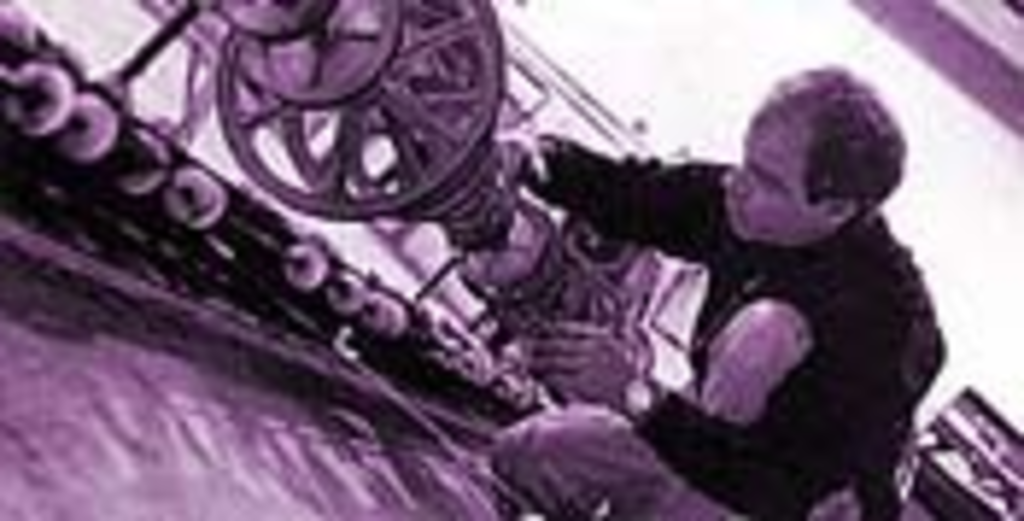 To feel or not to feelIt’s not in the details …D.F. Miller’s “Vectorgraph No. 12” has no beginning and no end. One searches for a place to start and to stop looking but to no avail. Instead, one takes in a dynamic division of space, composed of three axles, countless small wheels mounted to cement blocks and drywall, and loops of monofilament tied at intervals with bits of silver lamé fabric. This list of material components falls short of a description, though, because the whole thing moves, driven by three motors attached to the axles.

The details of “Vectorgraph” get swallowed up by the whole. One may appreciate the subtle contrast between the milky-white glint of the monofilament against the gray gallery walls or the undulating pattern of the various-size cogs attached to the axles, but after a few moments of constant movement, not to mention the overwhelming sound of the motors and wheels, one’s tendency toward analysis evaporates. This back-and-forth perceptual shift — from an awareness of detail to an immersion in overall sensation — comprises the experience of looking at and listening to Miller’s piece.

When one can look at a complicated arrangement and not worry about its parts, one sees a successful installation: a room that functions as an experience. Taking in “Vectorgraph” likely prompts metaphors to come to mind, but these metaphors differ, no doubt, from person to person. The ties of silver lamé become the figures here, and they move along their monofilament trajectories against a gray ground. If the ground were a wash of electric light at a wilderness campground, these ties would be moths. If instead the ground was a wildlife refuge seen from an airplane, they would be birds. If Miller had chosen 90-degree angles instead of tighter ones, the ties might remind one of electronic signals on a mother board.

Because Miller uses vectors and vectors imply the existence of circles, organic metaphors dominate. The relatively random placement of the plastic wheels used to form each vector reinforces one’s sense of complex patterns in nature. And so many references to the natural world elicit irony, because Miller’s work depends entirely upon mechanical invention.

Regardless of metaphor and irony, though, one soon disregards each bit and piece in favor of a comfortable seat on a bench to watch the pattern unfold. And in the end, Miller’s “Vectorgraph” isn’t about anything. It’s a contemplative, hypnotic experience akin to watching fish dart about in an aquarium. A certain contingent of viewers can’t get enough of such wonders, and a certain contingent prefers a more grounded, practical presentation. This first group will be content to watch Miller’s “Vectorgraph” dance, but the second group might enjoy it as well for its sheer inventiveness.

at the Johnson County Community College Gallery of Art

… nor is it in the overt act Marcia Motsinger’s new group of 20 untitled watercolor drawings might be the most idiosyncratic works to come about in a long time. It’s true: These drawings depict a variety of sexual positions between lesbian lovers. Whereas this subject matter normally would have only a marginal audience, the artist’s technical execution and quick wit beguile even the staunchest heterosexual.

Motsinger uses a thin, slightly shaky line of ink to delineate the two bodies, the bedding, and any relevant sex toys. In some pictures, one or both women may be partially clothed, and in others, architectural details, such as baseboards and door frames, provide a context for the act. The artist assigns a thin, smooth pastel color to each shape, and she carefully considers the placement of each body within the picture plane. Her arrangements — with their focus on shape, angle, and pattern — remind one of Japanese “pillow book” prints, but the deadpan line and bright color (not to mention the subject matter) help these images pull free from derivation.

Motsinger indeed answers a dubious question, but only in the realm of the mechanical. Her choice to focus on the overt process may strike some as cool and calculated, but on the other hand, the often-asked question involves the word “do,” not “feel.” One cannot help but be reminded of our society’s relative mistrust of what every person — regardless of sexual preference — cannot live without: the love and devotion of another human soul.

at The Late Show