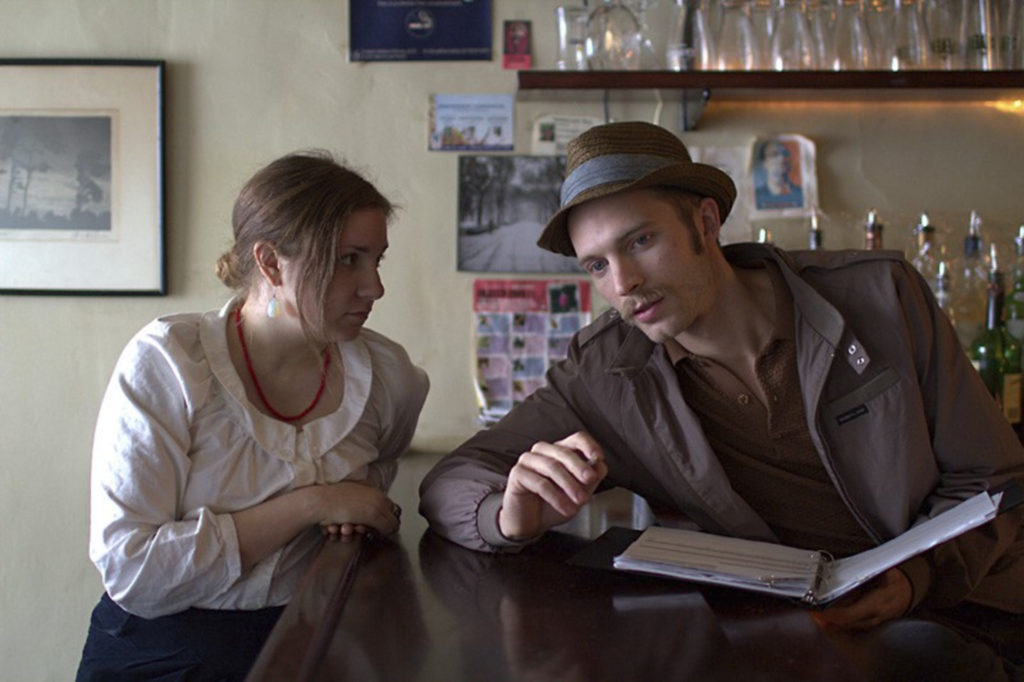 Newly graduated with a degree in film from an artsy Midwestern college, Aura and her pet hamster arrive at mother Siri’s spacious, immaculate white-on-white Tribeca loft. “Honey, I’m home,” the returning daughter sings out, signaling the movie’s fondly ironic take on sitcom convention. Mom, a photography artist (as opposed to a photographer), is engrossed in a shoot involving kid sister Nadine and barely notices Aura’s reappearance, precipitating the movie’s first round of sibling bitchiness.

Further pushing Tiny Furniture into psychodrama is the casting. The coolly self-possessed Siri is played by Dunham’s mother (and the loft’s owner), noted photo artist Laurie Simmons (the movie’s title refers to her props). Her actual sister, Grace Dunham, is Nadine, and Aura is played by the filmmaker.

Although Dunham was able to make a feature starring herself, Creative Nonfiction, when she was just an Oberlin undergrad, her alter ego, Aura, is presented as a loser. Her main artistic accomplishment is a YouTube video, in which, far from svelte, she prances around the college quad in a bikini.

Indeed, Aura has no particular postgraduate ambitions and, back home, reconnects with a dissolute and hilariously supercilious childhood friend, Charlotte (actual childhood friend Jemima Kirke), while studying for the role of art-world ingénue by reading her mother’s 1970s journals. (These may or may not be real: Did Laurie Simmons really think of herself as “Doris Day in Soho”?)

Neither Siri nor her words are any help. “Your mom is too successful not to be an asshole” is Charlotte’s sage analysis. Charlotte gets Aura a dead-end job as the hostess in a local restaurant, while Aura gets herself involved with a ripe pair of casually exploitative jerks: Jed (Alex Karpovsky, who played a less offensive boyfriend in Beeswax), a successful YouTube performance artist who’s never seen without his copy of Woody Allen’s Without Feathers and who’s crashing in the “hell of Bushwick” while looking for a TV deal, and Keith (David Call), the restaurant’s philandering chef. But the men in Aura’s life are far less formidable than the women.

To the degree that it has a narrative, Tiny Furniture proceeds from one Aura humiliation to the next. The funniest is the teenage party that Nadine opportunistically throws in the loft. With Charlotte vamping the boys and Aura parading around in her pajamas, it accelerates into one more screaming sisterly fight. And it programmatically blurs the line between performance art and situation comedy.

For all its one-liners, the movie isn’t exactly funny-ha-ha, although its tone is consistently droll, and, save for the final ba-da-boom, the comic timing works. The female performances in particular are emphasized by cinematographer Jody Lee Lipes’ artfully static compositions, particularly in the escalating emotional arguments between Aura and her mother or, should we say, Dunham and her mother?

Where the aggressively childish Dunham appears at once pathetic and shrill, the confidently grown-up Simmons alternates between bland disinterest and prissy disapproval. It would be hard to miss her resemblance to her equally calm, serious-looking and willowy younger daughter, and the authorial payback is evident. “Did you ever have a job that wasn’t taking pictures of little tiny crap?” Aura asks. Simmons’ art explicitly drew on the mise-en-scène of her own suburban childhood, but Dunham has done Mom one better.

It has been noted that Dunham, who is no one’s idea of a Barbie and generally dresses (or undresses) to accentuate her frumpiness, has a remarkable absence of vanity. Or is it a more highly evolved form of narcissism? The movie’s title may refer to Mom’s immaculate dollhouse world, but the world itself is Aura’s. There’s a built-in wink: As convincingly hapless as Aura appears, Dunham never lets you forget that she “grew up” to direct this film. 