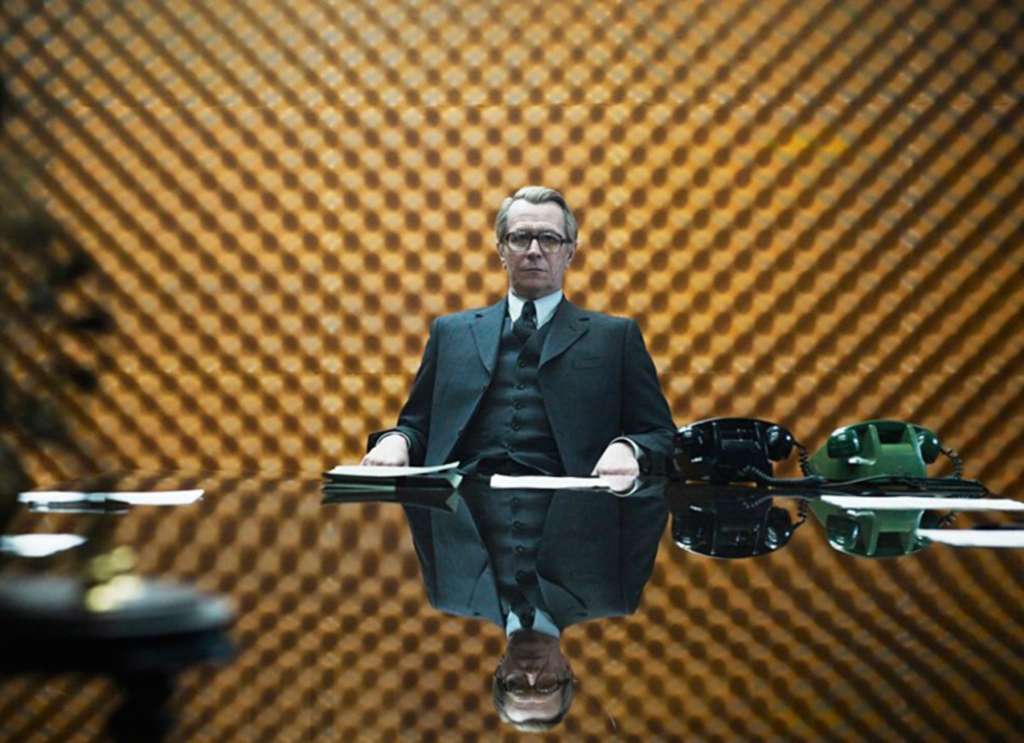 A self-effacing highlight rising above a rather dismal field of Oscar bait, Tinker Tailor Soldier Spy is an expertly mounted, exquisitely old-fashioned espionage thriller that capitalizes on two meanings of the word intelligence. Adapted from the 1974 novel by John le Carré — the first book in his trilogy centered on British spy George Smiley and his nemesis, the Soviet superagent known only as “Karla” — the movie is the third feature film (and the first in English) by Swedish director Tomas Alfredson, whose most recent effort was the original (and superior) version of Let the Right One In. Tinker Tailor could hardly be less similar in tone and subject matter — wan, hangdog spooks in mid-’70s tweed versus wan, bloodsucking adolescents.

Alfredson has complete command of the material. The film proceeds deliberately but with consummate attention to movement, strategy and surprise, much like the chess game that serves as its overarching metaphor. Smiley (Gary Oldman) discovers that his late boss and mentor, known only as Control (John Hurt), believed there to be a Soviet mole in the highest echelon of MI6, the British Secret Intelligence Service. Smiley is no longer an agent; he was summarily dismissed when Control was forced out in a generational putsch. The younger men demonstrate a greater willingness to throw small scraps of “chicken feed” secrets to the Russians in order to gain access to more valuable espionage, whereas Control’s people remain staunch anti-Communist hardliners.

At the heart of Tinker Tailor is the slippery slope of such partial accommodation. Four second-tier MI6 executives are running the show in the post-Control era — Percy Alleline (Toby Jones), Bill Haydon (Colin Firth), Roy Bland (Ciarán Hinds) and Toby Esterhase (David Dencik) — and one is an outright double agent. In flashbacks, Alfredson meticulously shows us Control’s off-the-books investigation, which Smiley must piece together and continue on his own. The linchpin is an operative (Tom Hardy) who supposedly has defected but is actually on the run from his own organization. With the help of a young agent (Benedict Cumberbatch) several rungs below the men under suspicion, Smiley begins the complex process of cleaning house.

Oldman is without a doubt one of our most underappreciated actors, most recently relegated to sturdy utility work in tent poles like Harry Potter and The Dark Knight. Here, he embodies Smiley as a late-modern British man, dedicated to basic ideals that he sees shifting around him — Western individuality, honor, loyalty, national identity. It’s not just that he has to root out betrayal within his own ranks. His sense of dignity shows cracks surrounding his unseen wife’s infidelity (for which he largely blames himself and his work). What’s more, the British-Soviet double-dealing has American fingerprints all over it. The U.K. is trying to gain entree into CIA intelligence, and the KGB is playing MI6 to gain access to same. So Smiley’s plight is one of masculine honor and British sovereignty under late-Cold War assault.

Oldman fashions Smiley’s dilemma as one of listening, watching and reacting — individual existence as a war of attrition. In a way, this is also how Tinker Tailor Soldier Spy succeeds as a piece of cinema. It thinks ahead. In this respect, it is more like the work of, say, Claude Chabrol than Alfred Hitchcock — taut and riveting but never flashy. It lets you know how it will play the game but doesn’t show you how the king will be captured until the final move.