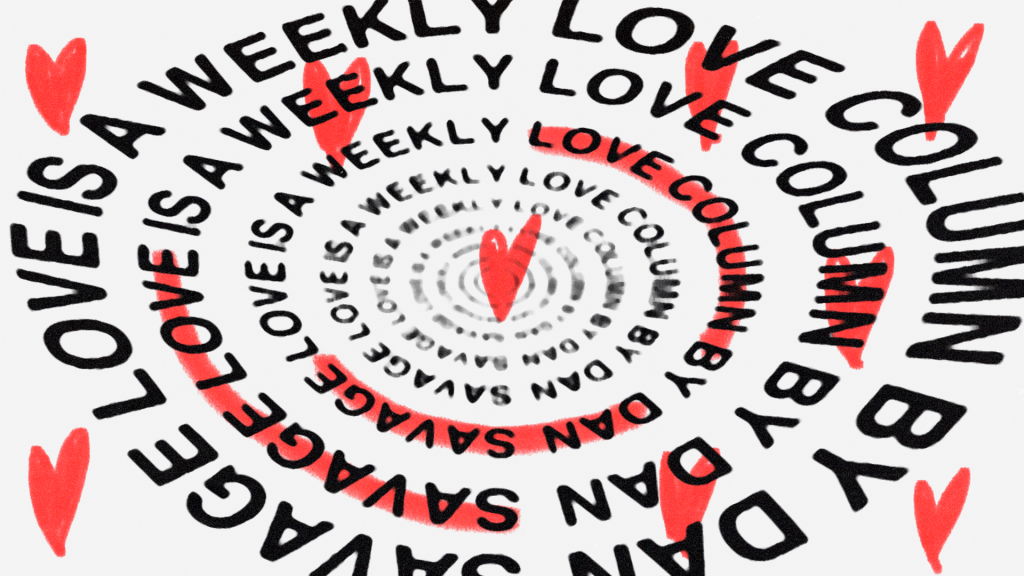 Dear Dan: I’m 20, straight, male, fit, and active. I masturbated prone—flat on my stomach—for years. I’ve now changed to a more traditional position (on my back or sitting upright), and I’m using my hand rather than grinding against a mattress. I can easily orgasm when I masturbate. I’ve had sex four times in my life, and I’m worried because I wasn’t able to orgasm by someone else’s hand, through oral, or during penetration. I felt more sensation with oral or by hand than I did during intercourse, but I wasn’t able to get off. This is extremely worrying, and I am increasingly depressed. Am I broken? Is my sex life ruined?

Dear BROKE: You’re not broken, BROKE, and your partnered sex life, which has barely begun, isn’t ruined. Even if you’re never able to come by someone else’s hand, mouth, twat, or ass—and that’s the worst-case scenario here—you can still have a rewarding and pleasurable sex life.

In the short run, BROKE, you need to be honest with your sex partners about the way your cock currently works. Let them know you’re going to be mixing some manual self-stimulation in with the vaginal/oral/anal penetration. In other words, at some point you’re going to pull out of whatever you’re in, you’re going to jerk it until you reach the point of “orgasmic inevitability” (OI), aka that split second between the start of orgasmic contractions and the good stuff spurting out, and then you’re going to put it back in. Since most women need to mix direct clitoral stimulation with penetration (or in place of it) in order to get off—before, during, after, or instead of intercourse—your honesty about what you actually need to get off will signal to your female partners that they can be honest with you about what they actually need to get off.

Backing way the hell up: The way you used to masturbate—prone—is likely the reason you’re having difficulty climaxing now. But lots of men who masturbated in more “traditional positions—e.g., on their backs, sitting up, standing up, etc.—have trouble transitioning to partnered sex from solo sex. The inside of a mouth, vagina, or butt doesn’t feel like your own hand (or a long-suffering mattress, in your case), and even someone else’s hand doesn’t feel the same as your own. While the excitement of partnered sex helps most guys get over the hump—for many men, it takes time and a little experimentation for their cocks to adapt. But men who engaged in “atypical masturbatory behaviors” as boys—and prone masturbation/humping a mattress counts—frequently have a harder transition to partnered sex.

There’s a name for what you’re experiencing: delayed ejaculation. And while delayed ejaculation can be frustrating, the opposite problem—premature ejaculation—is more frustrating and harder to work around. (I get a lot more letters from guys in despair because they come too quickly and too easily than I do from guys like you, BROKE, who take too long.) And, really, when you look at it from a different angle, your problem—being able to last forever—is really kind of a superpower. Because let’s say you fuck some lucky woman for ages, and she gets off again and again because someone—you, her, a third—is stimulating her clit at the same time. Once she’s satisfied (or shortly before she’s satisfied), BROKE, you can pull out, jack yourself to OI, then put your cock back inside her and blow that load or take the condom off and blow your load—with her consent, of course—all over her ass or tits or stomach or Toyota Corolla or whatever.

But for your partner to feel like this is your superpower and she totally lucked out when she met you, BROKE, you can’t leave her in the dark about the way your dick works. If you don’t let your partner know you need to stroke yourself a little right before you come, she’s likely to interpret your staying power (your superpower) as a sign you aren’t attracted to her.

Dear Dan: I’ve been seeing a guy for two years. It was a FWB situation from the start, because he already had a girlfriend. I adore him, we quickly broke the rules (L-word spoken on both sides), but the B part has dwindled to nothing. We haven’t had PIV sex since September, and he just added a second FWB to the mix. He swears he’s attracted to me and says we aren’t having sex—with the exception of me blowing him from time to time—because he’s older. But I know for a fact the other two women are getting some. He says he’s attracted to me—so why doesn’t he want sex? How do I make him see how much I need him without issuing ultimatums?

Dear SBH: Your FWB might come through with a little PIV if you issued that ultimatum, SBH, but it sure doesn’t sound like he’s going to fuck you short of one. You might be able to get this guy to quite literally throw you a bone, but I think your time would be better spent finding a new FWB.

On the Lovecast, the TRUTH about women’s libidos: savagelovecast.com.
mail@savagelove.net
On Twitter @FakeDanSavage.