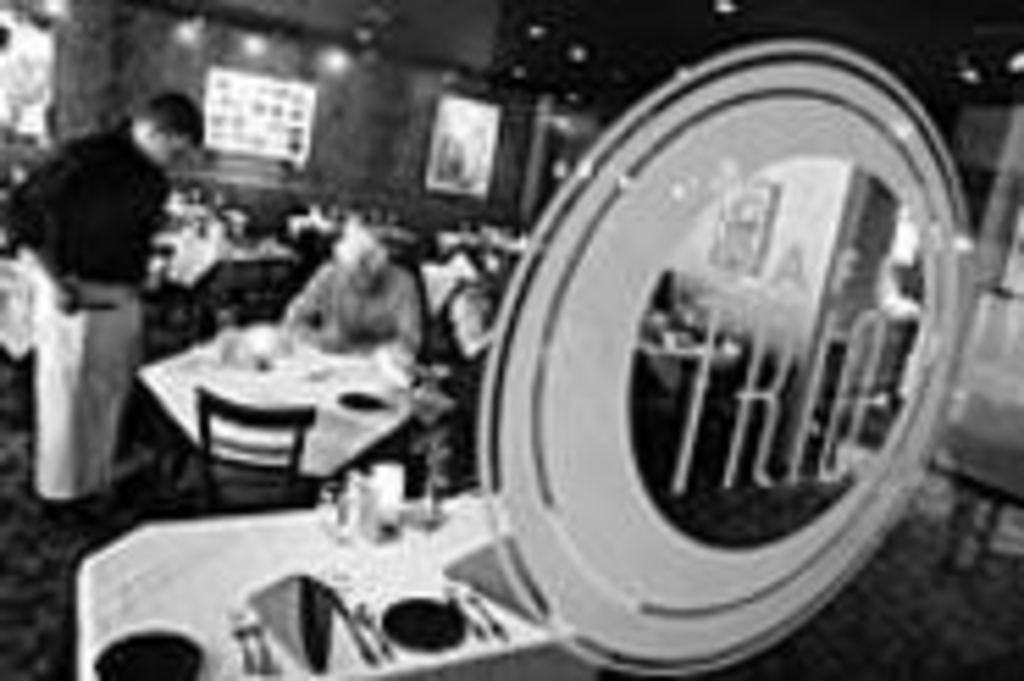 The three owners of the one-month-old Café Trio have given the restaurant a dramatic makeover (and long-overdue deep cleaning), and the space looks completely different from any of its previous incarnations. Until recently, though, I continued to have a keen sense of déjà vu whenever I walked through the door. Nineteen years ago, as a low-paid suburban journalist, I got a job as a part-time waiter at The Athena, the Greek restaurant located in this same first-floor venue of the Congress Building.

Over the next 9 years, the Athena’s volatile owner fired and rehired me at least half a dozen times. Once, after a long absence, he lured me back to work by promising in dulcet tones over the telephone, “You’ll see … I’m much nicer now.” He was nicer at that point, but I had grown much meaner, and we continued to snap at each other until the raucous night that the restaurant closed forever in 1994.

The Athena had a legendary allure (see My Big Fat Mouth, page 42), unlike Papagallo, the restaurant that followed in the same location. It apparently had a loyal following, too, but I had such an intensely visceral reaction to its glowering owner, Ray Kattan, that I never could force myself to eat there. And because Kattan didn’t do much with the aging interior, there was again that quality of déjà vu: Over there was the table where I shook with sobs delivering a plate of souvlaki to a particularly mean-spirited customer; here was the favorite table of that rich, neurotic (and stingy) vegetarian; and over there was the regular table of the two-timing doctor, who constantly cheated on his clueless girlfriend.

On my most recent visit to Café Trio, however, I finally felt as if most of the old ghosts had been swept away forever by the positive energy and graciousness of the good-looking duo of the namesake trio, Chris Younger and Tai Nguyen. (I haven’t met the less-hands-on member of the triad, businessman Al Ritchie, though I have enjoyed the cheesy radio commercials for his surplus outlet business in the Northland.)

The distinctive new décor also helps banish the spirits of previous restaurants. It’s so theatrical that it evokes both Norma Desmond’s mansion in Sunset Boulevard and the swishy saloon in De-Lovely. The freshly painted bar, in fact, is pretty swishy on all fronts, from the tinkling of pink Cosmopolitan cocktails to one patron’s cackling guffaw. “I don’t need to see Disaster ’74, honey,” he said of the show currently running at Late Night Theatre. “My life is Disaster ’04!”

“Still, it doesn’t seem to be a gay restaurant,” said my friend Bob, looking around at the predominantly heterosexual clientele in the dining room that night. “And then again … “

Our server had arrived, bubbling with personality. Maybe too much personality. This effervescent former ballet dancer, Richard Strong, is truly a case of waiter-as-artiste. When he likes his customers, he gives a full-out, clucking, cooing performance. If he detects a chill in the air, he becomes as imperious as the Duchess of Kent.

“People either love Richard or they don’t,” Younger said later. “There’s no in between.”

At that meal, Bob found Richard’s serving style “migraine-producing.” And my friend Cindy later told me his rudeness had completely spoiled a dinner with her partner and two pals. For me, Richard’s flamboyance is downright show-stopping, like a Bette Midler encore. Listening to him tell the story of his recent mugging — the thief jumped down from a tree — was as riveting as any one-man show I’ve seen off-Broadway. As a server, he might lack attentiveness, but as a performer he’s divine.

On my last few visits, though, I preferred the more low-key nonchalance of my old friend Brenda Smith. A veteran server, she’s far more interested in delivering food and beverages than in spinning monologues. She was our waitress on the night that Bob, Gia and I came in for a late supper, starting off with a plate of addictive flash-fried artichoke hearts, moist and soft inside a remarkably crunchy armor, along with Café Trio’s alternative to the ubiquitous fried crab cakes. The Anti-Crab Cakes were tidily constructed from fresh salmon, herbs and just a hint of breadcrumbs, baked and then lightly sautéed.

From her perch on the back banquette, Gia had a bird’s-eye view of the entire dining room. She found it fascinating. “It’s definitely a people-watching scene,” she said. She and Bob could barely eat their salads when a demurely dressed, white-haired gentleman and his companion, a heavily muscled youth wearing shorts and what Gia called a “real Italian wife-beater” T-shirt, entered and were escorted to a table.

“There’s a story there, I tell you,” Gia noted as she spread honey butter on a wedge of warm pita bread. “What a weird combination. Pita and honey butter, I mean. That’s a story, too.”

Oh, there are a million stories at Café Trio, and the most satisfying revolve around chef Eric Argie’s cuisine. His innovations are vastly superior to the holdovers from the old Papagallo menu. Nonetheless, Gia loved the old standby, Chicken Angelo — ribbons of fettuccine slathered in lemon garlic butter and heaped with grilled chicken, artichoke hearts and olives. But I thought Argie’s Mac Daddy, an upscale variation on mac and cheese, was more inventive. Argie is still tinkering with this dish, rich with fontina and Bel Paese cheeses. I’m glad, because it’s still not creamy enough; I’d dump the chopped peppers for something more decadent, like lobster.

Another holdover dish, the 16-ounce, brandy-splashed steak Armagnac that Bob ordered, might have been tastier had it been a smaller, more tender cut of meat. As it was, this impressive-looking slab was disappointingly chewy. But I practically swooned over Argie’s excellent tilapia Frangelico, which I ordered at Brenda’s suggestion even though the menu description (“lightly simmered in Frangelico Liqueur”) made me wary that it would be disturbingly sweet.

Happily, only the crushed hazelnuts encrusting the flaky fish had a slightly sugary note; the sautéed fish was savory and succulent. And I could have eaten a second helping of the creamy, tarragon-flavored mashed potatoes as dessert.

But the actual desserts were terrific, though the best one — a fluffy apricot zaccato — was an import from Cupini’s, and the house-made warm, fudgy Chocolate Suicide Spoon Cake seemed to be a doctored-up Betty Crocker concoction (which is why Bob adored it). “It’s an old family recipe,” Younger said later with a laugh.

Bob and I returned for an early dinner, nixing an appetizer and going straight for a house salad draped in a tart balsamic vinaigrette and two hearty entrées. Bob’s excellent chicken piccata was sensually swathed in a lemony butter sauce and capers, and I ordered pasta de espinaca. (That dish, which isn’t pasta at all, is a Papagallo standard that I had never sampled, of course. But I’ve succumbed to chef Argie’s version.) The pouch of flaky phyllo pastry was generously stuffed with spinach and feta cheese, baked until very crispy, then doused in a subtle saffron cream sauce and sprinkled with pine nuts. Sinfully fattening, but who gives a damn?

Well, I suppose I did, because after that dinner I wisely waved off dessert. Bob insisted on yet another hunk of the chocolate cake. “It’s really rich and creamy,” he said, practically inhaling the gooey pastry. We both stared at the street action outside the big picture windows, particularly a long-legged dame de la nuit smoking a cigarette and dramatically posturing in front of the Ambassador Hotel across Broadway.

“Oh, yes it can, in this neighborhood,” Bob said.

It can buy a mighty fine dinner, too.