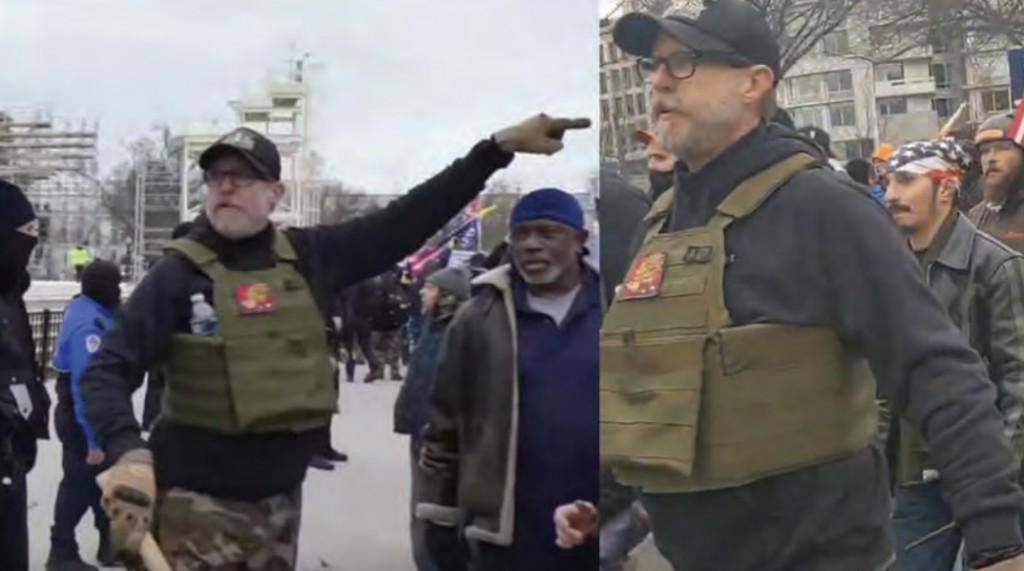 Billy Chrestman pictured above, one of the three identified Kansas City area rioters at the U.S. Capitol on Jan. 6. // Image courtesy of the U.S. Department of Justice

Three residents of the Kansas City area have been arrested on federal conspiracy charges after being identified as participants of the storming of the U.S. Capitol on Jan 6.

This includes Billy Chrestman, 47, an Olathe Proud Boy who took the lead in chanting and ax wielding inside the Capitol. Various videos taken during the insurrection show him doing so, dressed in tactical gear. He was later identified by former classmates who recognized him and notified the FBI of his involvement.

Chrestman is a member of the @splcenter designated and violent hate group the "Proud Boys" and this wasn't hard to figure out considering he put the group's moto on his gun. pic.twitter.com/yHWawTf4vi

Chrestman was arrested Thursday on six different charges. The charges against him are conspiracy, civil disorder, disorderly conduct on the Capitol grounds, obstruction of an official proceeding, knowingly entering or remaining in a restricted building or grounds without lawful authority, and threatening to assault a federal law enforcement officer.

Among the other Kansas City area residents charged after taking part in the riot are Christopher Charles Kuehn of Olathe and Louis Enrique of Blue Springs. Aside from Chrestman’s charge of threatening to assault a federal law enforcement officer, the charges against Kuehn and Enrique match that of Chrestman’s.

Although Chrestman, Kuehn, and Enrique are the first in Kansas City area to be identified as Capitol rioters. They now join more than 200 people arrested across the country who played a role in what happened that day. Authorities are still continuing to make arrests.