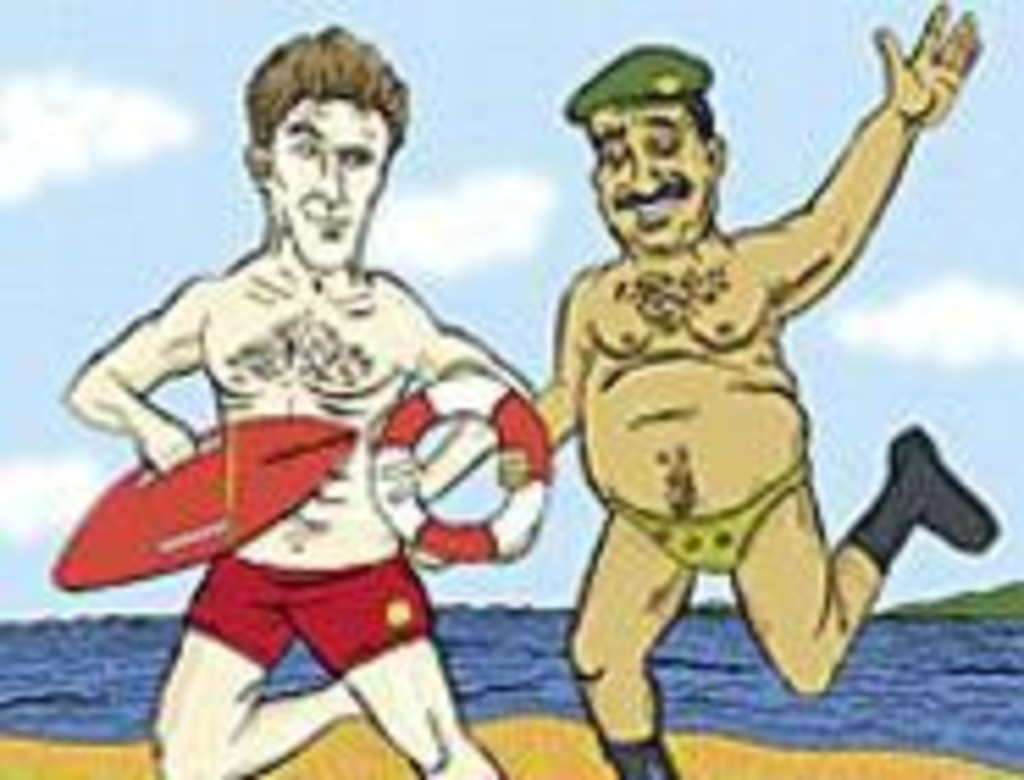 Thursday, April 17, 2003
Tennessee Williams’ The Glass Menagerie is one of the most-produced plays in the United States. But it’s never been done like this. The English Alternative Theater in Lawrence throws several twists into the classic play about a young man struggling for independence from his family. Most notably, the setting shifts from a small apartment in 1930s St. Louis to a gay bar in present-day Amsterdam. From there, an aged version of the protagonist, Tom, recounts his troubled younger days. And by projecting nearly 100 slides of 1930s film actors, director Paul Stephen Lim pulls a little psychoanalysis, too. The EAT version might not get the 25 curtain calls the original received in 1945, but it ought to get props for taking a few risks. The show starts at 8 p.m. at the Lawrence Arts Center (940 New Hampshire), and tickets cost $6-$10. For more performance times, call 785-843-2787.

Friday, April 18, 2003
The Urban Culture Project continues with its second series of art exhibits to beautify empty storefronts downtown. From 5 to 10 p.m., The Bank space at 11th and Baltimore houses the group show You Are Here, and a window gallery at Petticoat Lane displays works by Ian Dawson, Deanna Dikeman and James Woodfill. The afterparty, from 9 p.m. to 1 a.m., offers beats by DJ OZ McGuire at the rock garden between 10th and 11th streets on Main. Rock on. For more information, call 816-221-5115.

Saturday, April 19, 2003
Today is unofficially Female Jock Day. Union Station shows a sneak preview of This Is a Game Ladies, a new documentary following the women’s basketball team at Rutgers University. The film, which PBS broadcast last fall, reveals the personal drama that unfolds off the court. Let’s hope it also attempts to reveal the physical prowess on the court. The show, which costs $5, starts at 5 p.m. in the City Dome. Call 816-460-2020 for more information. And for the pigskin-inclined, the Kansas City Krunch — our semipro women’s football team — plays its first-ever home game against the Evansville Express from Indiana. No powder puffs here — this is the full-contact National Women’s Football Association. Kickoff is at 7:05 p.m. at J.C. Harmon High School (2400 Steele Road). For tickets, which cost $12 to $25, call Ticketmaster at 816-931-3330.

Two words. Baywatch: Baghdad. That’s one of the sketches at tonight’s Right Between the Ears, the annual witfest put on by Kansas Public Radio. David Hasselhoff and Saddam Hussein do have some things in common. They sport similarly poofy hairstyles, and both rose to undeserved, totalitarian power over a major country (Hussein in Iraq, Hasselhoff in Germany). KPR’s live show also manages to squeeze in bits with Al Gore hosting a radio talk show and Barbie and Ken dealing with menopause. The show starts at 5 p.m. and 8 p.m. at Liberty Hall (642 Massachusetts in Lawrence). For tickets, which cost $10 to $12, call Ticketmaster at 816-931-3330. If you can’t make it to Lawrence, listen to the later performance live on KANU 91.5.

Sunday, April 20, 2003
People celebrating Easter today might be too far from home for a family celebration. But they can head to the Easter Brunch in Rozzelle Court at the Nelson-Atkins Museum of Art (4525 Oak). At $27 a head, it’s sort of expensive, but it’s easy to get your money’s worth at a buffet of seafood, carved lamb and prime rib. For the meat-wary, omelets, pasta and baked goods abound. Pianist Margaret Pruitt adds even more fancy atmosphere to the grandiose space. The buffet is open from noon to 3 p.m., and you can walk off some of the calories by checking out the museum’s exhibits until 5. Reservations are required. For information, call 816-751-1248.

Monday, April 21, 2003
Saxophonist and UMKC jazz director Bobby Watson has done two very creative things. First, he invented a word — Afroisms — to describe colloquialisms he heard growing up in the African-American community. More impressively, he took his favorite Afroisms and interpreted them in music form. Example: “Take some, leave some.” Watson says he heard those words from music mentors when he’d attempt to play the ultimate solo every time he approached the microphone. To capture the idiom’s message, he performs a saxophone solo to a fast, shifting piece that requires him to step back frequently. OK. Whoa. Afroisms: The Spoken Word starts at 7:30 p.m. at the Performing Arts Center of the UMKC Conservatory of Music (4949 Cherry). Tickets cost $6 to $8. For information, call 816-235-6222.

Tuesday, April 22, 2003
Shakespeare’s second-most-famous tragedy has made it to the big screen more than fifty times. As a precursor to this summer’s outdoor production of Hamlet at the Heart of America Shakespeare Festival, the organization plucked from the stack four distinctly different film versions for its free Shakespeare Film Festival. Tomorrow is Shakespeare’s birthday, after all. So, which movie to see? Take our quiz and find your perfect Hollywood Hamlet. I get my coffee at: (A) Einstein Brothers Bagels, (B) Latte Land, (C) 45th Street Coffeehouse, (D) Muddy’s. My home décor is: (A) Traditional, (B) Modern, (C) Victorian, (D) Retro. If you answered A to both questions, see Mel Gibson’s Shakespeare-lite Hamlet at 6:30 tonight at the Trails West Branch of the Kansas City Public Library (11401 East 23rd Street in Independence); B: Ethan Hawke’s city-slicker Hamlet, 8 p.m. tomorrow at Glenwood Arts Theatre (9575 Metcalf in Overland Park); C: Campbell Scott’s post-Civil War South Hamlet (May 4); D: Laurence Olivier’s black-and-white, literary Hamlet (May 30). For more information, including times and locations for the May screenings, call 816-531-7728.

Wednesday, April 23, 2003
The fourth annual Storytelling Celebration starts today as national and regional “tellers” fan throughout Kansas City to spread the joy of oral communication. Arizonian Ricardo Provencio, for example, shares personal and historical tales of his Mexican and Southwestern pioneer roots from 10 a.m. to noon at the I.H. Ruiz Library (2050 West Pennway) and from 3:30 to 5 p.m. at El Centro Family Resource Center (290 South 10th Street). In his free performance, Provencio offers a Latino perspective on racism and the education system, and he does so in both English and Spanish. Storytellers from many cultures lend to the celebration over the next few days. For more information, call 816-437-3011.