This week, suit up with Mascots and Luke Cage, hail Taxi Driver and drink in all of Goliath 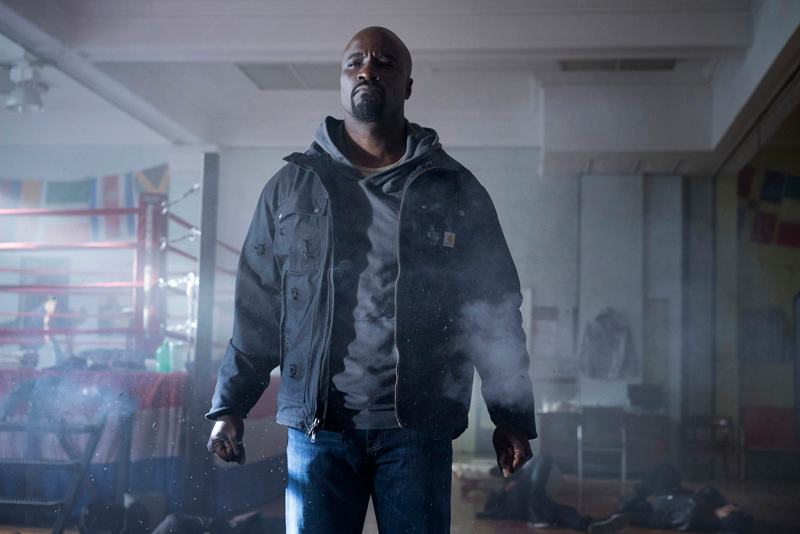 Mike Schur co-created Parks and Recreation, so it’s no surprise that NBC’s new single-camera sitcom The Good Place is breezy and witty. What is surprising is the level of depth evident in its “perfect” fantasy world. Let’s hope the show gets renewed and has time to grow. The premise: Kristen Bell has died and gone to a sunny suburban version of heaven where everyone gets exactly what he or she deserves. The twist is that she’s a “bad” person who has been mistaken for a “good” one by Ted Danson, who runs the joint. Episode 6 runs tonight, but you can catch up on demand or at nbc.com.

The buzz on Mascots, the first new Christopher Guest movie in 10 years, isn’t rapturous. I don’t care. I’m drawn to Guest’s low-key, improv-heavy mockumentaries the same way a comic-book fan feels the inevitable pull of the latest Hollywood superhero incarnation. Swap out subcultures, and the plot sounds virtually identical to Best in Show. Mascots follows a group of lovable outsiders who dress up in funny outfits and cheer their teams on as they make their way to the fictional World Mascot Association’s Gold Fluffy Award competition. With Parker Posey, Jane Lynch, Ed Begley Jr. and Fred Willard all back in the cast, I can’t imagine that, like A Mighty Wind and Waiting for Guffman, Mascots won’t get bette the more you watch it. The movie dropped yesterday, exclusively on Netflix.

Venerable TV creator David E. Kelley (The Practice, Boston Legal) boots up his old legal-melodrama machine for Amazon Prime with Goliath, a new show starring Billy Bob Thornton as an alcoholic lawyer who uncovers a vast conspiracy. Maria Bello and William Hurt lend their credibility to this rare straight-to-series order from Amazon, but it’s the brief look at Dwight Yoakam in full freak mode, with frizzy white hair and a chrome dome, that has my interest piqued. The full series arrived yesterday, so it’s ready for you to binge-watch.

Martin Scorsese’s bleak 1976 character study of a deeply alienated Vietnam vet (Robert De Niro) on the brink of violence celebrates its 40th anniversary this year. And man, oh man, with the current political climate of anger and frustration, it feels scarier and more prescient than ever. A new 4K remaster of Taxi Driver is back in theaters for two days only — today and Wednesday — through Fathom Events. It was first presented earlier this year at the Tribeca Film Festival, and video of the live Q&A afterward, with Scorsese, De Niro, Jodie Foster, Harvey Keitel and Cybill Shepherd, follows showings of the film for these special screenings. Check fathomevents.com to find showtimes.

Marvel’s Luke Cage was so popular the day it arrived on Netflix that users everywhere were reporting outages. But do the 13-episode series (a tie-in to Daredevil and Jessica Jones) and its bulletproof African-American hero (played by Mike Colter) live up to the hype? Yes and no. Created by Cheo Hodari Coker, a former music journalist, it’s stuffed with amazing soul, jazz and hip-hop tunes — and overflows with nods to black history, literary references and quotes from prominent black figures. The cinematography is sharp and stylized, with deep reds and browns that recall 1970s blaxploitation films. But the story rambles, and the energy comes and goes. It’s an odd bird, to be sure. But it’s also a nice change of pace for Marvel. It’s good to see the studio taking chances.

Perfectly timed for Halloween viewing, The Criterion Collection releases a newly remastered version of Guillermo Del Toro’s malevolent 2006 masterpiece, Pan’s Labyrinth, today on Blu-ray. An atmospheric fantasy set in fascist 1944 Spain, it’s rich in visual splendor and symbolic detail while keeping its focus on emotions. A young girl faced with the harsh realities of war retreats to a bizarre fantasy world, which becomes a tribute to, and a sad metaphor for, the eventual loss of childhood imagination. Get the movie separately or as part of Criterion’s new boxed set Trilogía de Guillermo del Toro, along with Cronos and The Devil’s Backbone.

Fans of serious cinema who’ve been patiently suffering through this disappointing year can take heart. The Innocents (Les Innocentes) is the kind of probing, multilayered drama that rarely gets made by Hollywood anymore. Guess what? It’s a European production. Helmed by Anne Fontaine (Coco Before Chanel), based on the true story of a convent of Polish nuns that endured multiple rapes at the hands of Soviet soldiers in 1945. The tone is as deliberate and measured as you might expect, given the somber setting, but it bristles with complex characters and conflicts, challenging all kinds of belief systems without ever preaching. New on Blu-ray now, it’s also rentable rom Amazon.