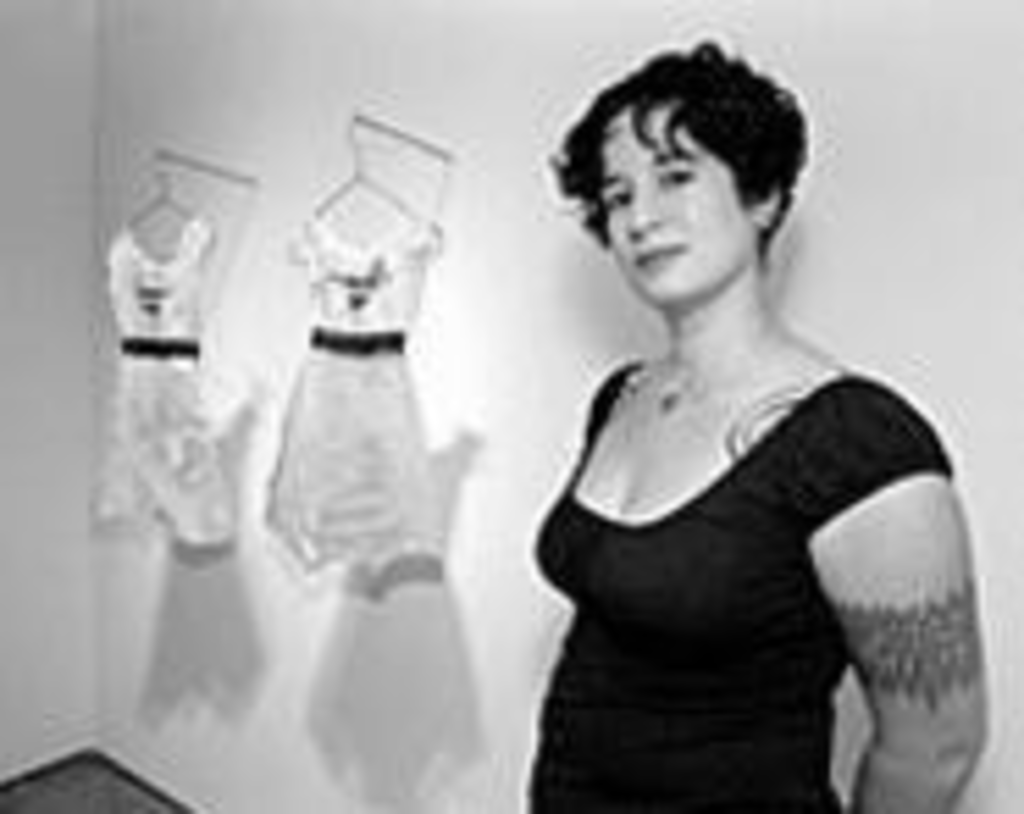 If all you knew about Renée Laferriere was that she made the tattooed pigskin garments on display at the Byron Cohen Gallery (2020 Baltimore, 816-421-5665), you might be surprised to discover that she’s a vegetarian.Exploring the process of tattooing, Laferriere needed the closest approximation of human skin she could get, so she took a cue from dermatologists, who use pigskin for grafting. “It’s actually close enough on a cellular level that our bodies won’t reject it,” she explains. “I don’t enjoy supporting the meat industry, but I view everything as material, and I prefer to choose the proper medium for the concept.” If it weren’t for some nagging cultural norms, she’d gladly use human skin from corpses.

The garments she’s crafted include tutus, underwear and aprons. On one tutu, she has inked a sacred heart that says “Mommy.” On the lacy apron is a topless woman doing housework.

Once a tattoo artist herself, Laferriere says women are still breaking into the industry, though they’ve been its subject matter since forever. “I was aiming for that perspective of the female in tattooing,” she says. “When I’m doing work that deals directly with the feminine, I want your first reaction when you glance across the room not to be Good God, what is that? but Wow, how pretty, how cute, how adorable, how sweet.“— Gina Kaufmann

It could be risky business for a Hank Williams fan to challenge a Grateful Dead follower to a duel. The Williams fan might find himself a frying pan as a weapon, but the Deadhead could unleash an arsenal of concert dates so technical that even the fiercest Hank fan would lull, defenseless, into a coma. Luckily, Monday’s Hank Williams vs. the Grateful Dead Rural Grit Happy Hour at the Grand Emporium (3832 Main, 816-531-1504) cultivates no such animosity among its participants.The title simply means that musicians who have the biscuits to take the stage can play either Hank or Dead tunes — the more obscure, the better. Some, like the Wilders’ Betse Ellis, may choose to take it up a notch and play the Dead Hank-style, or vice versa. Between 6 and 9 p.m., draws and tacos are only a dollar apiece, which ought to get even the most ramblin’ man truckin’. And it’s just $3 to get in.— Nadia Pflaum

Take it to the bank.

We’re waiting for the Kansas City equivalent of Buyolympia.com, a Web site of goodness that makes it easy to buy local — if you live in Olympia, Washington.We’re into the idea not just because we want to support our homies but also because, in spite of what the haters out there say, Kansas City artists kick ass, and they make stuff we much prefer to Gap stock. If you’re among those for whom shopping for presents feels like scratching a capitalist bug bite, you might hit the We’re Desperater show for relief. All the items on display in this Your Face-curated show at the Bank Gallery (11th Street and Baltimore) are wearable works of art made by your friends and neighbors. This gallery has weird hours; see Dontyoufeelbetter.com for details.— Kaufmann