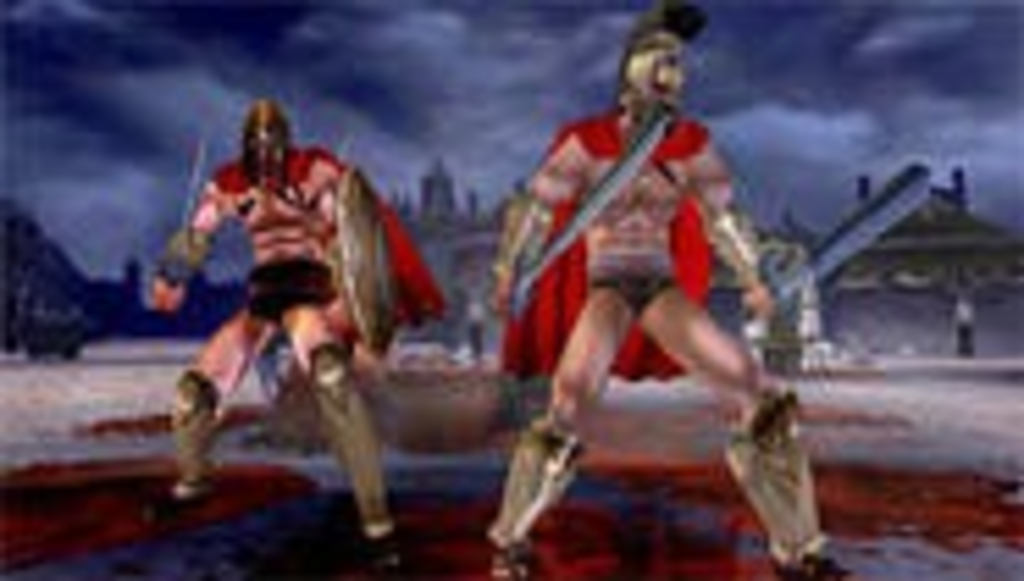 A game based on 300 has no excuse not to kick ass. Just picture yourself leading 300 Greeks (that’s 1,800 abs) against the Persian empire’s massive armies, led by the evil, pierced, and preening King Xerxes. Since your Spartans are the deadliest soldiers in the world, the Persians’ only chance is to smother you with sheer numbers — so every level should force you to cut a bloody swath through hordes of invaders, taking on 5, 10, even 20 at a time, doing as much damage as possible to back them off for another day.

Throw in surround sound and a stylized look to match the film — which most critics compared to a video game anyway — and you’d have a pretty sweet game. So you’d be forgiven if you saw 300: March to Glory in the store and said to yourself: “Self, there’s no way they could screw up 300!” and bought it on the spot.

Well, remember what Mom said happens when you ass-u-me?

Against all odds, Warner Bros. Interactive managed to snatch defeat from the jaws of victory. March to Glory is so utterly bad, you’d almost think the developers meant it to be awful. How else to explain the bungling of the biggest no-brainer movie-to-game conversion in history?

It’s hard to say where to begin, but what’s most notable is how the game thumbs its nose at your expectations every step of the way. For example: After watching 300, you’d expect to see, you know . . . 300 Spartans (not to mention a few million Persians). That is the title, after all. Well, not so fast — the PSP isn’t cut out to draw armies of thousands. The endless Persian hordes now respectfully invade four at a time, and your 300 Spartans now number about 2.

Or one, if you don’t count yourself.

After watching 300, you’d expect balls-to-the-wall action — a whirlwind of swords, spears, and arrows, with no shortage of severed heads pinwheeling through the air. There’s some of that (as much as can be expected from a four-on-two scuffle), but you also get some sneaking missions. Yes, the same King Leonidas who kicked ambassadors into wells and screamed about dining in hell in the movie now tiptoes past sleeping guards . . . which prompts the question: Did the developers even see the movie?

None of this would matter anyway, if the game were fun — but it’s not. In fact, it’s so tedious, you start wishing the Persians would just take over, pierce everyone’s nipples, and be done with it. Leonidas runs and fights like he’s underwater, and there’s no reason to use anything but an effective three-hit attack you learn in the first level — which makes the fighting mind-numbingly repetitive.

The only part that’s even mildly amusing is when you get to slaughter Xerxes’ harem-cum-freakshow. When a two-minute sequence of laying waste midget tumblers and lesbian strippers is the high point of your adventure, something’s wrong.

This is the sort of game that should have been on the PlayStation 3 or Xbox 360, which could manage massive armies and faster game play. Instead, it feels like a slapdash budget title. If you’re craving swordplay on your PSP, try the Sega Genesis Collection, which sports the hack-and-slash classic Golden Axe — along with 27 other games, all for the same price.