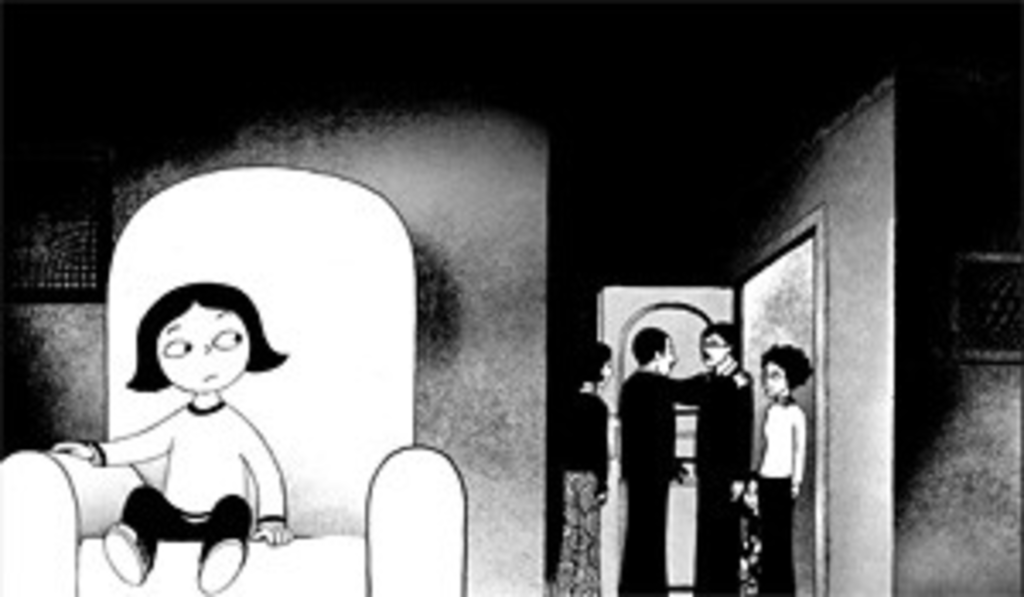 Persepolis is a small landmark in feature animation. Not because of technical innovation — though it moves fluidly enough, and its drawings have a handcrafted charm forgotten in the era of the cross-promoted-to-saturation CGI juggernauts — but because it translates a sensitive, introspective, true-to-life, “adult” comic story into moving pictures. Whereas Robert Crumb was represented on the big screen only as a porno-groovy shadow of himself and Daniel Clowes decamped to live action, Marjane Satrapi has made the crossing. With the aid of French comic-book artist Vincent “Winshluss” Paronnaud (both are making their first feature here), Satrapi’s four autobiographical Persepolis volumes have been smartly streamlined into 95 minutes of screen time.

We first meet little Marjane (voiced by Gabrielle Lopes) in 1978. A rambunctious Bruce Lee acolyte, she’s the mouthy only child of a progressive Tehran family watching their shah’s repressive government give way to the ayatollah’s far worse fundamentalist revolution. The state of the nation steadily carries on its bad-to-badder momentum through the mid-’80s. To protect their daughter from the escalating war with Iraq, Marjane’s parents send the now-adolescent girl (voiced by Chiara Mastroianni) into exile at a Viennese Lycée Française. Until then, Marjane’s personal history naturally overlaps with her country’s. (Her bedroom, where she violently headbangs to Iron Maiden, morphs into the border’s battlefields.) Once displaced from the culture that nourished her, however, the wider world recedes, and teenage Marjane’s focus turns inward. She’s victimized by boys and by her alien pubescent body, and she starts freely sampling subcultures in an attempt to re-establish her sense of self. The film’s latter chapters bring her home for the university years, where the strictures of Islamic law have pulled even tighter.

The characters are downright cute, rendered in clean, comfortingly rounded lines. The comic relief tends toward the broad (a leg-humping pet pooch and a rambunctious scene of renewed self-determination scored to a tunelessly warbled “Eye of the Tiger”). Sentiment and nostalgia are unabashedly indulged — Marjane isn’t quite addressing “Somewhere Out There” to the night sky, but many a scene lands on a poignant coda. Still, the emotion never feels chintzy. A special dreaminess is reserved for the memories of the elder generation’s lost, lovely habits — a newly liberated uncle’s gift to Marjane of a swan made from prison bread crumbs; a beloved grandmother’s habit of filling her bra with jasmine petals — reminders of a once-poetic national character too delicate to weather the changing times.

Our heroine’s early girlhood is marked by this imperiled sense of enchantment, and the movie uses an imaginative kid’s tendency to color the world with make-believe as a license for expressionistic ornament. Dancing marionettes illustrate to Marjane how British interlopers propped up the shah; a recounted escape from government persecution takes on the quality of a fable.

Satrapi and Paronnaud say they were inspired in part by silent-era German Expressionism, which is evident in the film’s dynamic gouges of black. Some of their most striking scenes are in silhouette, suggesting Lotte Reiniger’s lacework-detailed animation of the ’20s. Persepolis, penned by a team in Satrapi’s adopted home of Paris, is almost entirely black-and-white; the exception is a framing device that finds a grown-up Marjane reminiscing from Orly airport. The books were largely drawn in pure China-ink simplicity, but the film is ambitious with effects. As fundamentalism lowers its pall over Tehran, Persepolis imparts the cultural sea change with a schoolyard of upturned girls’ faces in an inky ocean of newly imposed cloaks and headdresses. When little Marjane, punked-out as much as Islamic law will allow, is accosted on the street by two female zealots, the women appear lamia-like, solid black bodies coiling around their prey.

The accessibility of her firsthand address — how Satrapi refits epic national tragedy to an identifiably personal scale — has made Persepolis college curriculum and its maker something of a spokeswoman. She has even earned a tribute of sorts from back home. Her movie’s Jury Prize-winning stand at Cannes got a response from an Iranian government-affiliated cultural foundation; the film stands accused of presenting “an unrealistic face of the achievements and results of the glorious Islamic Revolution.”