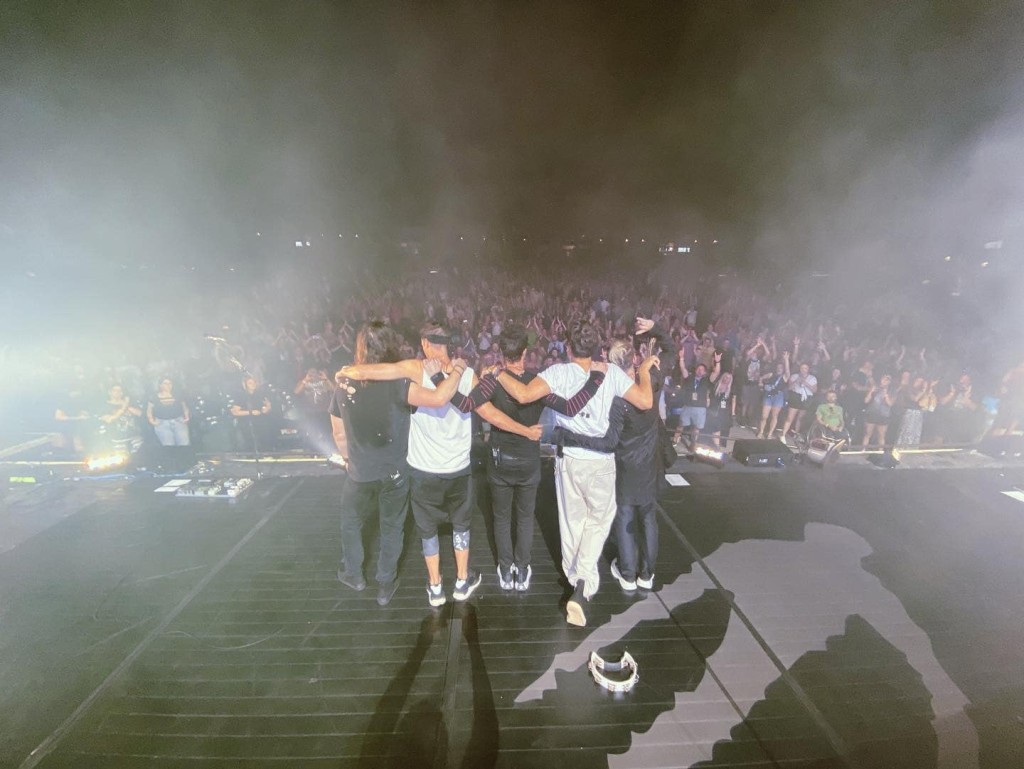 with Taking Back Sunday and Hockey Dad

Third Eye Blind hit the stage to some unexpected walk-on music: Vivaldi. The band was immersed in fog and almost exclusively lit from behind, their faces largely lost in shadow, turning them into these rock star silhouettes. Frontman Stephan Jenkins took center stage on the elevated ramps—as if the stage itself isn’t pedestal enough—launched his gum out of his mouth, and started to sing.

Jenkins’ cool collectedness was in stark contrast to opener Taking Back Sunday, best known for their early-aughts emo anthems. TBS frontman Adam Lazzarra was a picture of frenetic, pent-up energy, never speaking below a shout.

And oddly, this New Jersey-born white man had taken on the accent and cadence of a Southern pastor leading a gospel choir. His affected twang showed up in both his singing and speaking (shouting) voice, saying things like “gee-tar,” and constantly referring to the crowd with the dated binary “ladies and gentleman.”

The band stridently worked their way through the set, but Lazzarra’s rowdy drunk uncle routine ultimately detracted from how enjoyable it might have otherwise been.

Whatever substances Lazzarra was on, at least he was enjoying himself: “Look at where we are! This is beautiful! We’re the luckiest people I know!”

Third Eye Blind kicked off with “Ways” from their 2019 album Screamer, they transitioned into something a little more familiar: “Thanks A Lot,” from their 1997 self-titled debut. They all wore black and white, creating a stark tableau. Jenkins went for the power move of the all-white outfit: white tee, white track pants, and a black jacket that he shedded midway through the set.

Jenkins is a cool, collected, composed performer. His voice is powerful and unwavering. The entire band, with few exceptions throughout the night, showed precision in their singing and playing, even for songs that are 25 years old.

During “Never Let You Go,” one of 10 (yes, 10) songs they played from their debut album, Jenkins told the audience to turn around and greet someone you don’t know. I got a good handshake and enthusiastic hugs from my neighbors.

To some, 3EB might be on a washed-up nostalgia tour, but the folks in the crowd that night were fully hyped for it. They were singing along to some of their newer songs. They were dancing in the aisles. (They were overindulging in alcoholic beverages and being escorted out, still having a great time.)

Jenkins performs with a neutral, focused face. Neither appearing nervous nor overly joyful—perhaps the stature of an unimpressed Roman emperor. During instrumental breaks, he would stand on the edge of the stage, still, watching the crowd, as if to evaluate our “worthiness.”

They brought stadium rock with their newer track “The Kids are Coming,” and beach rock energy with “Can’t Get Away.” They also fleshed out their set with two covers: “Disorder,” orginally by Joy Division, and “Funeral Singers” by Californe.

3EB is at their best, musically, on songs with wild dynamic shifts—from contemplative to manic, as in “Narcolepsy.” After a soft synth opening, Jenkins came in with gentle vocals, and slowly the band built up the energy and tempo until it broke open as he sang, “Into another nightmare!” If anyone in the crowd was not yet on their feet, this song got them there.

About halfway through the set, they began to play “Can’t Get Away,” and Jenkins proclaimed, “We sound fucking good tonight!” A couple songs later, he added, “That sounded like bravado earlier, but I meant it. There’s a point where we say we become salty on tour. It’s where everything starts to just feel—how do I describe it—greasy and fun. And that started tonight for us. Things just started to click.”

It was clear they were in their groove.

Jenkins gave the rest of the band a break and played two songs solo on acoustic guitar:“Red Star” and “The Background.” The audience was less than attentive for this interlude, taking it as an opportunity to grab another beer or hit the restrooms, but attention came back for the angsty and mournful “Losing a Whole Year.”

The song relies on both falsetto and sing-shouting, and Jenkins still had the cords to pull it off. They followed that up with a rendition of “Motorcycle Drive By,” surprising the crowd with a beauty you wouldn’t expect to find at a Third Eye Blind show.

In a world where all encores are planned and all headliners assume we want one, concert-goers have to wonder what would happen if the crowd just didn’t cheer enough for it.

Maybe it’s because they had already played 21 songs, but a good number of people started heading for the gates when the band first left the stage. If an encore hadn’t been planned, it wouldn’t have been demanded. So, it felt a bit unearned when they returned to the stage.

“Semi-Charmed Life” was competently done, but with none of the frantic desperation captured in the original. They are good at going through the motions, though, better than anyone should expect them to be. The high point of the night was “How’s it Gonna Be.” It was actually perfect. Jenkins harnessed this complete tenderness in his voice, ramping up slowly into sorrowful singing.

The band was clearly on a high after these two encore songs, and the crowd roared for more. The band stayed on stage, looking at one another and back out at the crowd. Jenkins half-shrugged and pointed at his watch, suggesting they possibly were running into a curfew, but played one more song anyway. They finished out the night with “God of Wine,” once again putting an impressive amount of care into a song they have played hundreds of times before.

The bar is now raised for nostalgia tours. Old timers are on notice: You can perform in the same format over and over again, but if you can’t still play your beloved hits the way 3EB can play theirs, you should just stay home.

The Kids Are Coming (To Take You Down)

Blinded (When I See You)

How’s It Going to Be

Liar (It Takes One to Know One)

You Can’t Look Back

Call Me in the Morning

A Decade Under the Influence

Cute Without the ‘E’ (Cut From the Team)