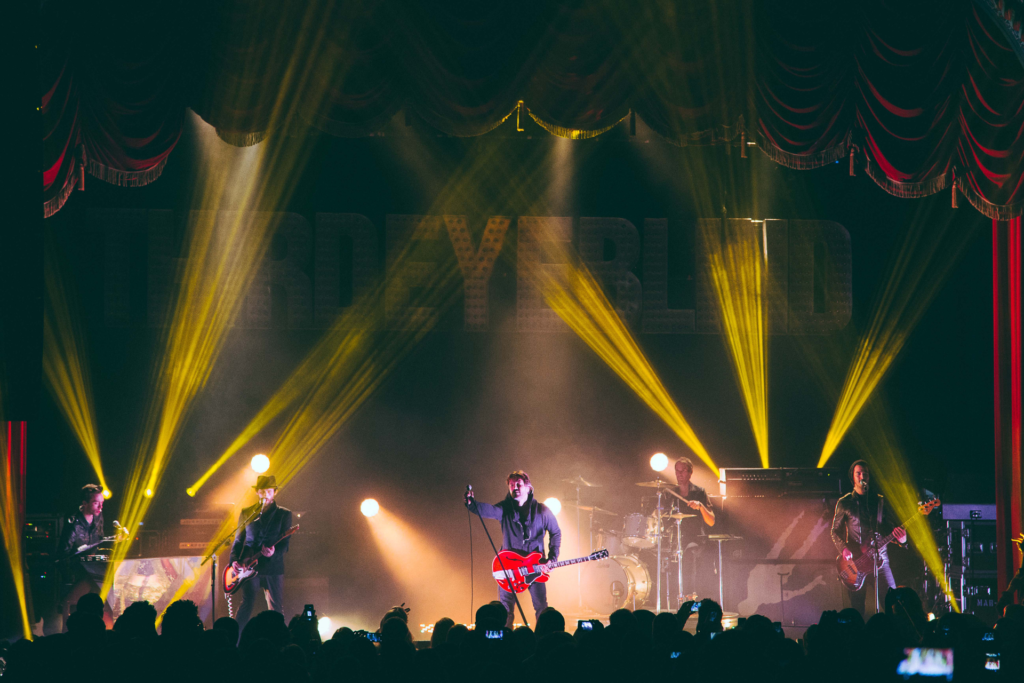 Third Eye Blind, the ’90s rock band known for such pop gems as “Jumper” and “Semi-Charmed Life,” performed at the Uptown the night before Thanksgiving, winning the hearts of all in attendance and blowing my mind so thoroughly that I am left wondering if I was the only asshole who showed up thinking it might be merely nostalgic. What occurred on Wednesday night was no simple walk down memory lane for the cleaner members of later Gen X, but a brush with pure magic, and one of the best shows I’ve ever been to. No joke.

A competent but utterly uninteresting opening band gave the crowd its first taste of the headliner’s somewhat perverse sense of humor. Hydra Melody seemed to have been handpicked by the Third Eye Blind Corporation to provide an important contextual reminder to its fans: Third Eye Blind is more than just a band that was on the radio a lot when you were 14. Hydra Melody acted as face of a vacuous, career-driven rock band that looks like this: dumb, boring and selfish. There are so many bands like this around that it’s easy to forget about the existence of the more passionate predecessors, and 3EB wanted you to think about that.

Forgetting about the existence of a band seemed to be one of the night’s themes. Third Eye Blind is a group that has sold 20 million copies of its albums, and yet one didn’t expect them to show up like they were the Rolling Stones. Third Eye Blind came with more power, lights and theatrics than Radiohead brought to the Sprint Center last year. First-timers like myself were forced to consider that maybe 3EB really is an A-list band, and to wonder why we never thought of them that way.

As the lights went down and the band started up, fog pouring heavily across the stage, the guitarist and bass player moving to their spots, eerily choreographed in unison, a tall figure in a hood strutted out to thundering cheers, jumped on to a platform in the back, grabbed a microphone suspended from the ceiling, and kicked in to one of the 3EB songs that makes you say: “I think I remember this one.” 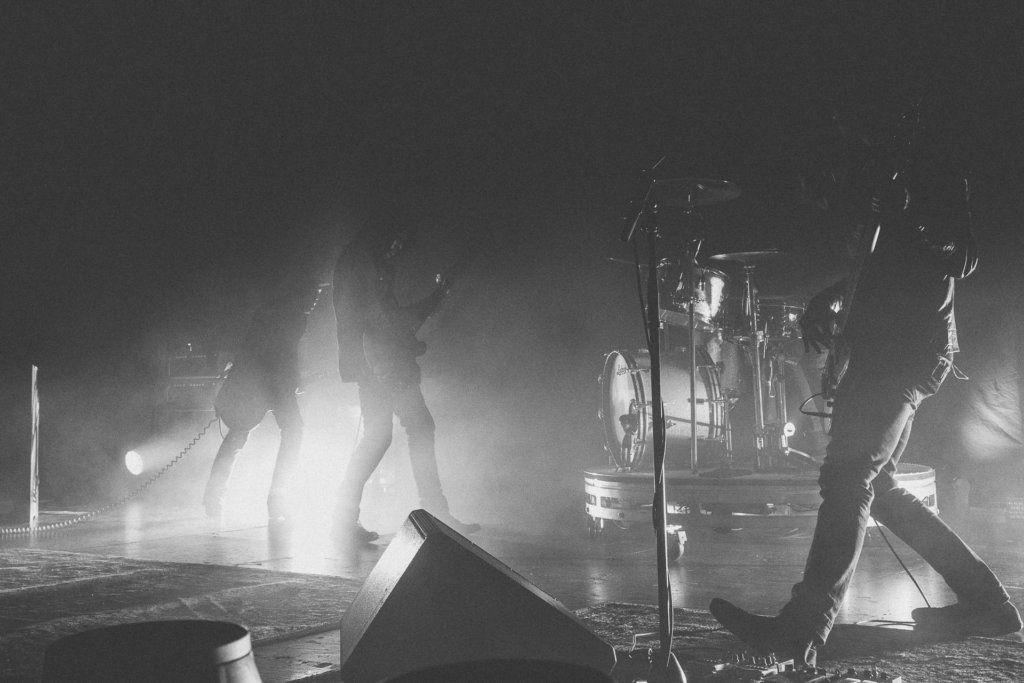 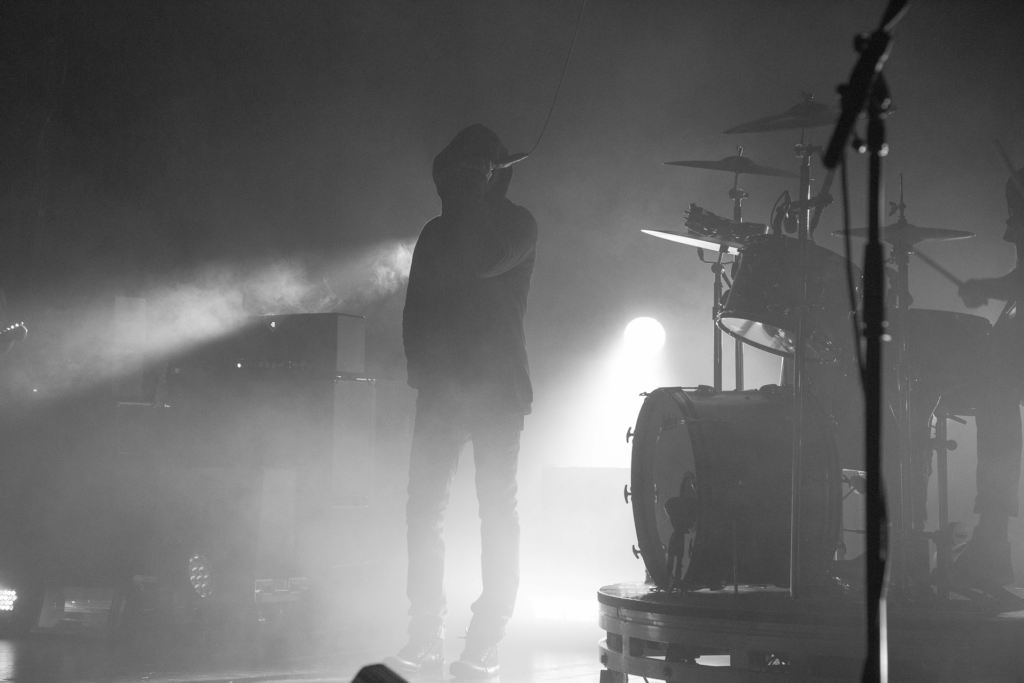 As the drums came in, the crowd was suddenly made shockingly aware that there was a truly insane amount of lights, sound-triggered strobes, and a giant lit-up banner reading “THIRDEYEBLIND” hanging above the band. Singer Stephan Jenkins clung to this position for the first four songs, a shadowy character dancing in the back, a perfect silhouette of another life form. As the set progressed, Jenkins made his way to the front and teased the crowd with the potential stripping of his hood, which occurred at another perfectly choreographed moment; the first chords of another song made us say: “Oh yeah, I totally remember this one.”

From his shadowy entrance to what evolved into a Jagger-like stage presence, Jenkins (who is Third Eye Blind, the only original member) proceeded to wow the crowd every way he could. I became aware that half of this audience was not just remembering a band but were actual 3EBheads. The secret no one let me in on was that Third Eye Blind has a live-show following in a similar way that the Grateful Dead had, and that the 3EB live show was not just a collection of songs but something of a “Tommy” style rock opera. Each song had its own particular lighting and ambient introductions; spotlights came on to a band member at the exact moment they soloed. Jenkins made a request that the audience relax, meet the person next to them, and introduce newcomers to 3EB culture, to which the audience responded more comfortably than I would have pictured.

“I know, I know. Only insane people talk to strangers,” he said. “But this is the safest environment in the world, right here.”

Which may or may not have been true. In our section, the fratty-looking showgoers were smoking so much pot that even my pack-a-day lungs couldn’t handle it. A girl behind my friend was trying to stand on the seatbacks, falling forward onto us at one point, screaming along to the songs with everybody else. 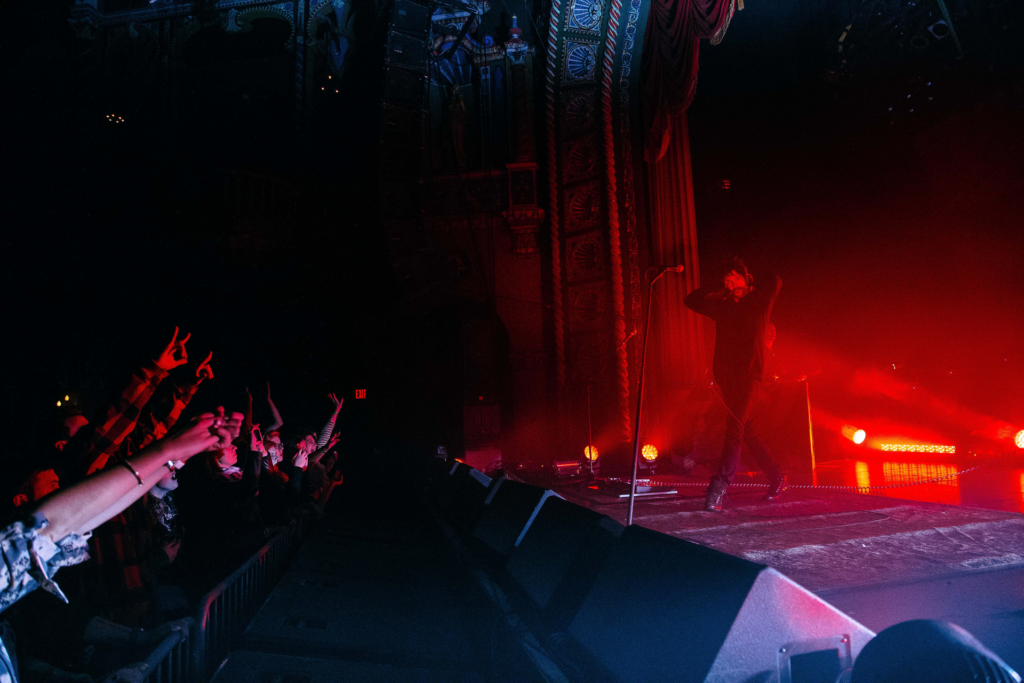 The transition from ironic, cynical participation into heartfelt, joyous participation was noticeable within minutes of Jenkins’ request. Jenkins is a real charmer of a performer, as well as a prankster: This is a guy who released a piñataful of live crickets into a showcase for record execs when the band was younger. He’s also a guy who is sued and has been sued by his labels and bandmates over songwriter’s rights several times over. 3EB’s Wikipedia page reads like the plot of an HBO legal drama series. In short, Jenkins is an interesting character whom you believe when he talks.

An hour into their set, with still no sign of “Semi-Charmed Life,” the band left the stage to give Jenkins a moment of “Stephen Time,” for him to do “whatever he wanted.” As it turned out, “Stephen Time” was code for singer-songwriter night. Jenkins stayed by himself with an acoustic guitar and no lighting effects for a while before the band returned, ready for another dive into what would turn out to be a three-hour set.

[page]Two hours into the show, still with no signs of “Semi-Charmed Life” or even “Jumper,” the band left the stage again for a 20-minute drum solo. If this was a build-up to the hits, it was serious. Drummer Brad Hargreaves, who came with the second-longest tenure of any 3EB member, drove everyone nuts with his virtuosity and the weirdness of what was happening. While he blasted away at his toms with one hand and played a sampler with the other, the consensus of the crowd seemed to be that the moment they were waiting for was coming next. This was actually not true. The band returned again, played some new songs, eventually “Jumper,” and left the stage, while the crowd yelled a mutual “bullshit,” knowing that the encore would include everyone’s favorite song. 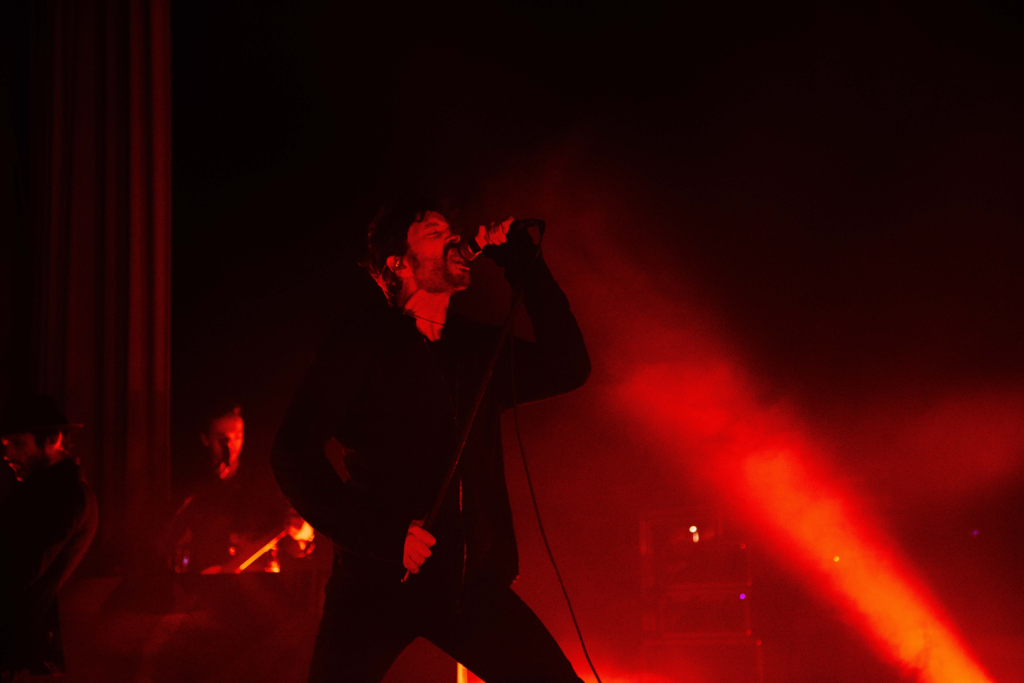 The encore seemed to be a third Third Eye Blind set, however, when the band finally returned to the stage. Several songs in, Jenkins finally gave us “Semi-Charmed Life,” to an earthquake of gratitude from the crowd, who sung along at the top of their lungs. “Semi-Charmed Life” lasted 10 minutes or more.

“I don’t even remember who I was when I wrote this song, but the thing is, it doesn’t fucking matter!” Jenkins said in the middle of the song. “You people keep this song alive! This is yours! And I’ll tell you what I’m thankful for. I’m thankful to be here, in this moment, right now, seeing what just one song can do, and I’m thankful that we’re going to go back into the studio in June and try to write more of them! I never want this moment to end!” 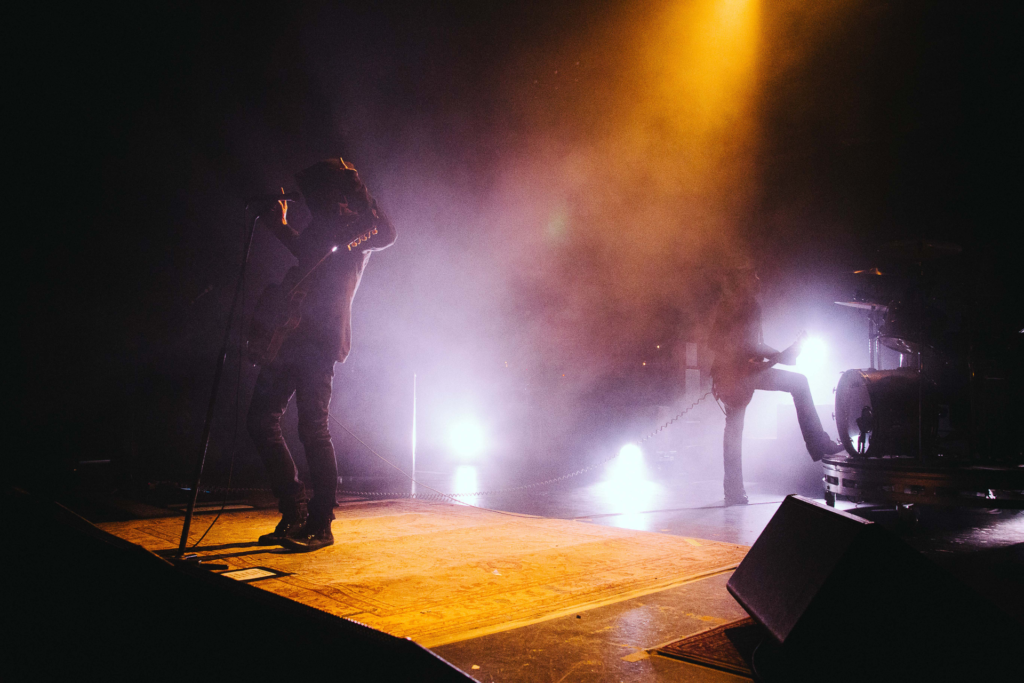 The crowd went nuts again, and everyone sang out their “goodbyes” together. After that, we had to leave – though you could hear Jenkins in the background insisting that anyone could leave if they wanted, but Third Eye Blind wasn’t going to stop, and would never stop, so long as we still wanted to be there.

There is something different to seeing a musician who is honest with himself and his audience. There is a difference between a competent catchy-rock songwriter and a genius catchy-rock songwriter. These songs were not merely the backdrop to a high school experience, but were the blood running through it. Whether you remember high school fondly, you remember Third Eye Blind putting it in perspective, one way or another. You could have been smoking cigarettes in your rich friend’s jeep shit-talking it, or making out with a girl to it, but it was always there, always catchier than other “happy” stuff on the radio, a little friendlier than Nirvana, definitely higher quality than Oasis, and easier to sing along to than “Slim Shady.”

In a way, these songs were the high school experience. Jenkins wrote lyrics that held an incredible amount of wisdom masked in a funny, catchy package. From the girl who was like a sunburn to that conversation where “You say I’ve changed and I say, what’s wrong with that,” these were really well-written, smart songs with themes that went beyond hook-ups, getting wasted and driving fast. Rather than being depressingly, selfishly teenage-ish, Third Eye Blind songs admitted their faults and showed the complexity of a world where making relationships work is harder than just knowing who is right and wrong at any given moment. 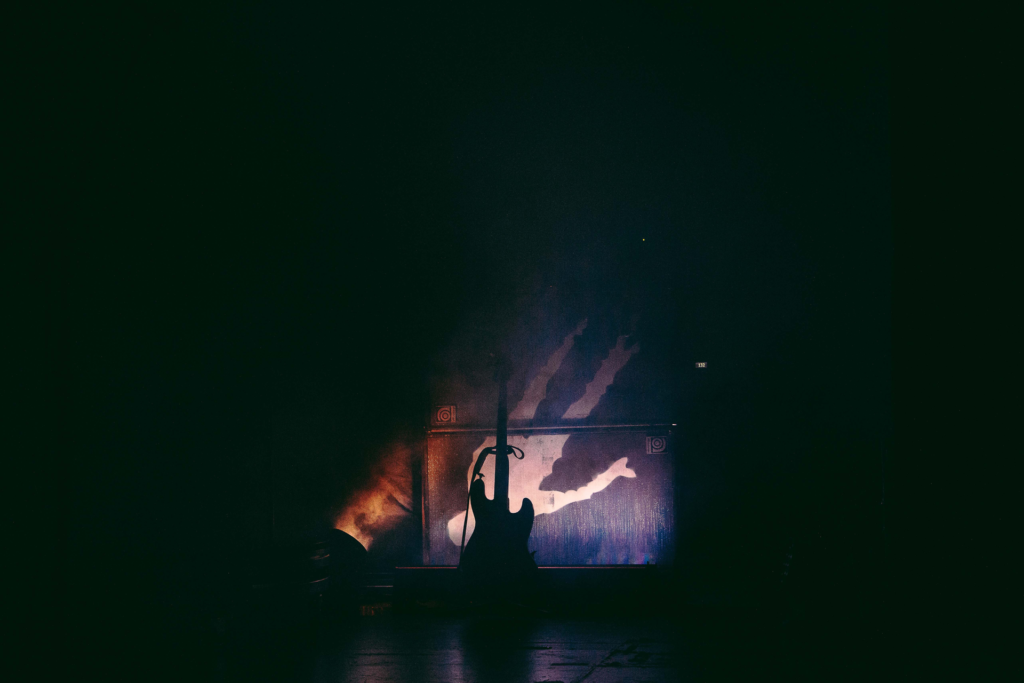