They did it legitly: Reel Goats’ James Rico on making it big with DaBaby 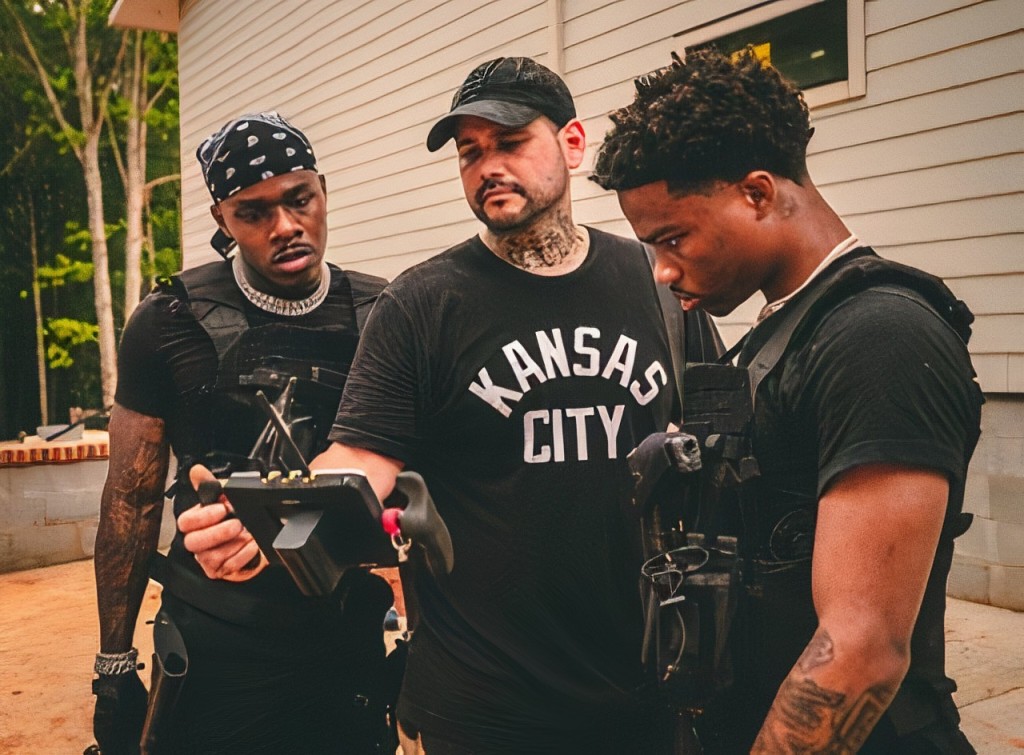 Behind the scenes shot of James Rico with rappers Dababy and Roddy Ricch on the set of the Rockstar music video. // Photo by Nick Mays

In today’s modern music climate, there are but a few video production teams that are breaking through barriers in the industry.

While most know about Cole Bennett’s powerhouse production team in Lyrical Lemonade, they are not the only ones making waves. The Reel Goats crew hails from the outskirts of Kansas City has exploded onto the scene by working with arguably the biggest and most successful artist in hip-hop today, DaBaby. From their viral production of the video, “BOP,” featuring the Jabowackees, to their most recent venture in the charting hit, “Rockstar,” James Rico and the Reel Goats team continues to stagger the hip-hop community.

I got a chance to speak with Rico to discuss his time in Kansas City, his relationship with Dababy, how it feels to be recognized by the BET awards, and plenty more.

The Pitch: What does Kansas City mean to you and what has it done for you in regards to uplifting your career in video production?

James Rico: Being in Kansas City during my early years allowed me to work weddings, small businesses, and local artist’s content. It helped me realize that there was a bigger world to this than just the small city in Kansas City. Then I went to Kansas State, which was even smaller. I stayed there for a while. Coming back to Kansas City, I began to garner a name in the community which gave me the confidence I needed in my skill set. In the end, Kansas City taught me how to work harder and that I can have this big dream, I just had to keep going for it.

You’ve been at this grind for a while. When did you see your hard work pay off? What was it like when “Suge” blew up?

When we moved out to LA it was just me, my brother, and this guy JR. There is a video on my Facebook that I re-watch here and there, from the first day we had moved out there. I could see my fear and excitement in the video—at the point when the video was taken, I knew it was a turning point in my career. This was my big leap, the uncomfortable leap, the thing that would take me to the next level. Every person that I ever came across told me I had to get to LA. That was a huge goal of mine because I knew that if I could get there, then I would make it or at least had a chance to make it. Putting myself in a position to get out of Kansas City was a huge turning point.

While in LA, and for about two years, we were working hard and fighting to get our name out there. I had known DaBaby since 2016, back when he went by the name Baby Jesus. We had done a few videos already under that alias. We linked again a little while later to do “Walker Texas Ranger.” That was the first video where we were very content with the feedback and viewership. The two years before that video we were working on sets. I wasn’t directing either, I took about a year and a half hiatus from that. I was focused on working and helping others with their projects. Once I got back into the director’s chair I had learned so much about the bigger side of the industry and that’s when “Walker Texas Ranger” came about. Right when that video dropped people started to wonder “who are these guys?”

After “Walker Texas Ranger,” I had asked DaBaby if we could get on the road with him for the Baby on Baby tour. Being on tour led to the creation of the “Suge” video and we knew it was going to be huge—bigger than “Walker Texas Ranger”—we just didn’t know how huge. Once “Suge” dropped, the video ended up becoming its own monster. Living inside that experience, you don’t really get caught up in it. You just keep going onto the next thing. We noticed it when we would go from performing in front of a thousand people at club shows to performing at arenas. [It] is obviously incredible. “Suge” definitely changed our lives in how big we could see ourselves getting.

What changed between working with DaBaby in the past, during his Baby Jesus stage, versus now? It’s obvious that comedy plays a vital role in your videos, who typically comes up with that aspect in the video?

With “Walker Texas Ranger,” he [DaBaby] said he wanted to play the main character, which was Chuck Norris. He allowed me to take control of how that role was to be played. I ended up having him do things that were cool, funny, you know, tongue in cheek. Once he saw the result of that video, he became interested in doing more of that. His people are also hilarious and fun to be around, I’d like to think the Reel Goats team is like that as well, we all have light-hearted humor. We realized that people liked the idea behind not taking things so seriously so we just continued that route.

Kansas City took notice when we saw you in the Made Mobb gear in the “Rockstar” video. Was that on purpose?

Last year we ended up growing so quickly as a brand. Obviously, for us, it wasn’t an overnight success but for the public, people wondered where we came from. With all of that taken into account, I wanted to make sure people knew I was from Kansas City. Since growing our brand, I have tried to help and motivate people from the city whether it be on Facebook, Instagram Live, or whatever and push them to follow their dreams. They may just have to work harder, being in such a small industry like Kansas City. Made Mobb was one of the first to do that for me. I met them in 2015 and they were so great to me so I always wanted to support them. I knew there was going to be BTS footage in the “Rockstar” video so I wanted them to be shown and express how much I care. So, yes, definitely on purpose.

What does it mean to you to have two BET nominations and assist in DaBaby’s Male Artist of the year?

First, I want to give props to the great people that work with him behind the scenes. They never get enough credit. In the end, though, he [DaBaby] is such a hard worker and he pushes everyone around him to work as hard as him. To be a big apart of that is pretty amazing and to see him succeed furthers that amazement. There was never a small goal of just making videos and collecting a little money together. We wanted to be the biggest and we had that mindset the whole time. We always said “watch what happens, watch what happens—by next year he will be the biggest artist in the world.” That would just be something we would say. We knew that he was going to be huge, we just didn’t think it’d be this fast and understand what that meant.

As far as our BET award nominations: it was awesome but at the same time, we were thinking, “Are you sure? Us?” [laughs] Like I said earlier, you don’t really feel it like you thought you would because you’re the one that did it. For me, I’m not in it for the awards but I am motivated to make it to that level where it’s getting recognized by award shows, even though the award isn’t the goal. That’s why we can still feel good after not winning. I was honored and surprised that “Suge” got nominated because it was just three or four of us working on it. It was not any major production shoot. “BOP” was something special, as well, with it being such a bigger production. I wasn’t disappointed with not winning at all. My only goal was to make something special with these videos.

What’s next for Reel Goats, in the current state of the pandemic and post-pandemic?

With the pandemic going on, we plan to continue what we’re doing under the guidelines we set and the ones set for us to keep everyone safe. For “Rockstar,” we knew that we couldn’t stay in Los Angeles, so we took the production to Charlotte. We’re also excited to start working with new artists as well.

Post-pandemic and down the road, I am wanting to write and create my feature film. When I was young, I did a bunch of the short-film contests and what-not, so I do want to get back into that mode of thinking and moving outside the realm of music videos. I do want to come back to Kansas City as well, do some talks at college campuses and talk about my journey as well.