There’s more of the same in Mario Kart Wii, and that just might be plenty 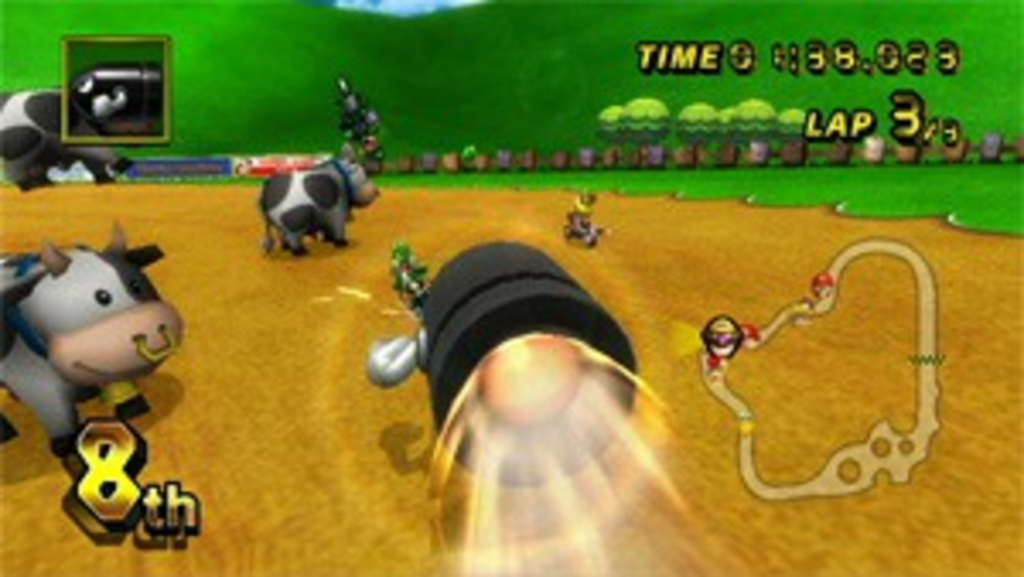 This year marks the 16th birthday of Mario Kart, the landmark Nintendo franchise that consists of eight identical racing games and legions of fans who buy every one of them.

And 16 years later, nobody really has a problem with this. True to form, Mario Kart Wii offers no significant change in basic game play, weaponry (turtle shells, banana peels), or mainstay characters like Luigi and Bowser. If familiarity breeds contempt, the Mushroom Kingdom remains blissfully unaware. Hell, half the courses in Mario Kart Wii are cribbed from the Super Nintendo and N64. Is it delightfully retro or just plain lazy? Probably both, and it probably doesn’t matter.

So what makes this racing rehash excusable? For starters, as I type this, six senior U.S. Army officers happen to be sitting at the table across from me (don’t ask), and their conversation has just drifted from Desert Storm to Rayman: Raving Rabbids. At a local hospital in town, routine “Wii-habilitation” sessions take place in the locked-down psych ward. There’s even a freaking Wii bowling league at our retirement home.

What all this means, in addition to constant bellyaching from hard-core gamers about carbon-copy sequels like Super Smash Bros. Brawl, is that much of the Wii’s target audience is playing this decade-old stuff for the first time.

Nintendo knows this. And that means until everybody grows tired of the Wii — and that will happen, probably just after Wii Fit hits and we all realize we’re being tricked into exercising — those of us looking for a new spin on our favorite kart racer are left stranded by the roadside.

But is Mario Kart Wii any good? Does Yoshi crap speckled eggs? The new motion-steering controls are better than your own Honda, and old-timers even have the option of using antiquated analog controls. (The game also comes packed with a plastic steering wheel that might become your biggest guilty pleasure.)

Mario Kart still reigns as the most accessible party game ever, thanks in part to its knack for evening the playing field. Your slingshot cornering skills may get you to first place, but a last-second lightning bolt might return you to the end of the pack, clearing the way for your kid sister. Is it fair? Depends on whether you’re at the receiving end of the heat-seeking turtle shell.

Gamers of all stripes likely will agree on the single best tune-up unveiled here: online racing. With Mario Kart Wii, Nintendo runs laps around its previous online efforts, and you won’t tire of facing opponents around the world (and their cartoon Mii counterparts), even after hours of play, thanks to the minimal lag time between races and democratic game play, which lets everyone vote on the next track to play. This is wonderful news for anyone who’s been on the receiving end of an Xbox Live shouting match about level selection.

Mario Kart’s only other leap forward is the addition of motorcycles to the lineup. They handle a bit slicker than the sputtering go-karts, and perhaps they offer a hint of more daring alterations in store for future installments. Then again, we’ve said that before.