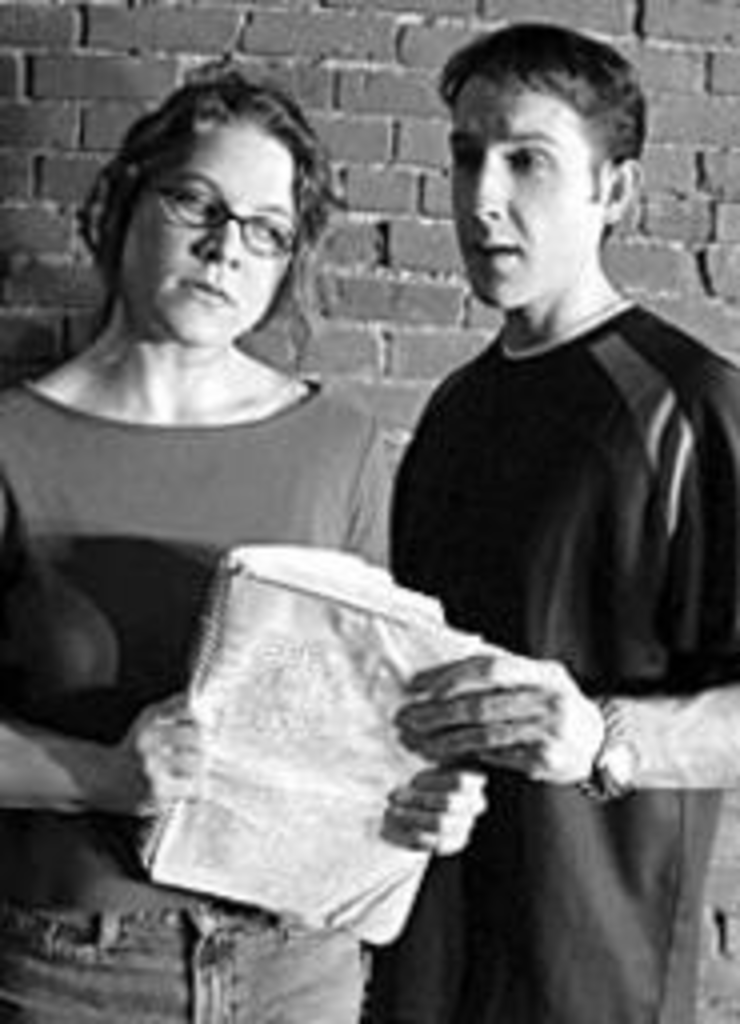 Proof is about math, as you might have heard, but that’s only in the details. More accurately, it’s about love and hate. It’s about family rifts and family responsibilities, a feeble parent and feuding sisters and an irrevocable legacy. It’s about many other things as well, all of them written so beautifully by David Auburn you want to preserve the play in amber.

Proof is a coup for the Unicorn, because the show is still running on Broadway starring Jennifer Jason Leigh (after an eighteen-month turn by Mary Louise Parker) and about to grace London’s West End with Gwyneth Paltrow. When the Unicorn announced that it had obtained the rights for its own production, word on the street was that Cinnamon Schultz was likely to get the lead. She did, and in a role that Parker aced indelibly, it’s not insignificant that Schultz makes the part her own.

She plays Catherine, a 25-year-old mess who has a gift when it comes to numbers, just like Robert, her mathematician father (Richard Alan Nichols). On the day Catherine would normally be celebrating her birthday (as much as a hermit would celebrate, at least), she will instead bury her father. Her proper, somewhat snooty and ever-superior sister, Claire (Sarah Crawford), arrives from out of town for the funeral and finds that Catherine’s only human contact is with Hal (Brian Paulette), her father’s protege.

Hal is trying to make sense of more than one hundred notebooks in which Robert scribbled over the years. They contain a few numbers but mostly a lot of chaotic rambling. Catherine’s father had a serious bout with insanity, and his daughter, knowing that the apple doesn’t fall far from the tree, wonders when her mind will snap. Claire suspects that it already has; she’s awfully insistent that Catherine leave her ramshackle Chicago home and go back with her to New York.

The end of the first act contains such a wallop it provokes gasps from the audience. But what is revealed further cements the relationship between Catherine and her dead father (for good and for bad), further alienates Catherine and Claire and causes Hal to make a near-fatal mistake: He underestimates Catherine.

Cynthia Levin directs with such a fine brush that the play unfolds as naturally as if you were eavesdropping on neighbors; her actors are never false or stagey. Paulette gives little spins to Hal’s lines (like the one about champagne being “festive”) that make you believe he’s making it up on the spot. As Crawford plays Claire, the character becomes more of an antagonist than the minor player she seemed to be in the New York production. And Nichols is in turn nurturing, feisty and quite mad.

Schultz’s Catherine might be hard for some people to warm up to. She has made her own choices but blames others for them. She is calculating and snippy, yet challenging and interesting. But when she reads one of her father’s notebook entries and sees how it unravels into babble, she’s also moving. It’s the moment when she realizes her father is not going to get better, and she’s devastated, terrified she might be next.

Even the design elements never feel artificial. For scene changes, lighting designer David Kiehl projects slides and snippets of home movies that show the characters in less-complicated times. (They must have come from the actors’ parents’ archives.) They are also overlaid with mathematical formulas, a nice effect that is also reflected in Atif Rome’s set where, for example, the back porch of Robert and Catherine’s Chicago home is constructed of wood bisected with brick bisected with sections of a trellis; it’s a geometric series of right angles, Xs and diamonds. Jeffrey Cady’s sound design includes subtlety — the faint rumbling of the elevated trains — and the more vigorous tones of an approaching siren and a rock band stuffed in the offstage living room for Robert’s wake.

Post Script: The crunch is underway to get David Wayne Reed’s debut play, Come Back to the 9 to 5, Dolly Parton, Dolly Parton, up on its feet by mid-June. That means his frequent costars from Late Night Theatre have some fund-raising to do to get their new space ready at 1531 Grand. The effort kicked off on April 30 at the downtown club Push with The De De DeVille Show, hosted by that lithe Late Night actor and female impersonator De De herself. That same night, DeVille (named for Cruella DeVille — a role that, much to her chagrin, De De won’t be playing when the Coterie stages 101 Dalmations next season) premiered an ongoing series of last-Tuesday-of-the-month shows at Push. She was, however, confronted with the ultimate diva disappointment: lighting that was limited to one bare bulb. Onstage anyway were Ron Megee, portraying a disgruntled stewardess; Jon Piggy Cupit, performing his rageful version of “Tainted Love” (for which he wore a necklace of maraschino cherries); and Reed himself, dolled up for Bette Midler’s signature, “Friends.” Tipping the performers a buck at a time were such theater-world personnel as Coterie artistic director Jeff Church, Dames at Sea‘s Seth Golay and jack-of-all-trades Brian Adkins.