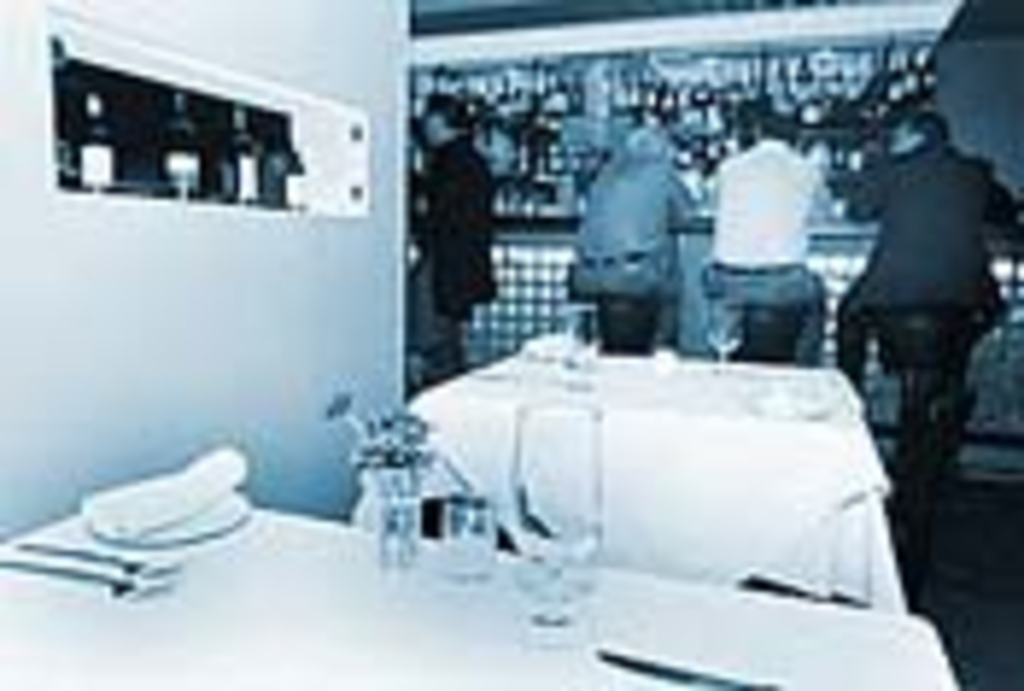 Restaurant gossip can travel faster than the show-business kind. When a restaurant is doing badly, a manager is caught stealing, or an irate chef flings a knife across the kitchen, the servers complain to their friends (often other servers or the biggest talkers of all, bartenders), who spread the tales like wildfire.

The stories about Zin, the stylish new restaurant at 19th and Main, started the minute owner Alex Pryor, who dresses in all black and looks like an art gallery director, first threw open the dining room’s heavy wooden door at the beginning of February. By its first weekend, Zin was the most talked-about restaurant in the city.

“The portions are too small,” sniffed a wealthy socialite who was thrilled to have been one of the first in her set to get a reservation. “And it’s so expensive.”

“It’s the bastard stepchild of Venue,” growled a vinegary friend of mine, a restaurant veteran who compared Zin to the ill-fated Venue restaurant, the trendiest bistro of the 1990s. “I was starving when I left. I mean, the dictum that ‘less is more’ is great for architecture, but not for food. I had to stop for a hamburger on my way home!”

I shuddered at the thought of another restaurant where style was everything and the food was an afterthought. But after a few visits to Zin, I found that those early criticisms are abstract and subjective. The food is far more interesting than the restaurant’s sleek style. True, it’s a very artistic restaurant (diners pass through a photography gallery before entering the establishment), and its ambience is so cool and remote, it reminded me of the controversial white-on-white painting in the Yasmina Reza play Art. In that play, longtime friends almost come to blows over their differing opinions on a modern painting that just looks like a big, empty canvas. One character sees nothing; another sees a fresh, lively, and interesting statement.

Zin’s interior is as colorless as the painting in Art, but the restaurant achieves this effect using tones of black and charcoal or smoky gray. The darkness of the dining room is relieved only by dabs of light: Glass globes hang in front of the windows, and the tables are draped in stark-white linens and tiny, white votive candles. But the only splashes of actual color come from the solitary flowers floating in tubelike vases on the tables and, more important, from chef Shelly Pierre Rash’s food.

The items on Rash’s menu arrive in a vibrant palette of colors and textures presented as artfully as a stage set design. And while portions are not generous in that traditional hearty Midwestern way (where there’s barely enough room to slide a toothpick between the meat loaf and a mound of mashed potatoes), this isn’t a traditional hearty Midwestern restaurant. You want big and hearty? Go across the street to the Hereford House.

What Zin (named for Zinfandel, “the favorite wine of the owner,” our server confessed) has going for it, in addition to a big-city sexiness, is an imaginative menu and surprisingly friendly, charming service (something that Kansas City’s few other “sophisticated” restaurants have in short supply). The prices are high, however, which might frighten off some adventurous diners eager to sample creative appetizers, such as the pan-seared foie gras with vanilla sauce ($14) or spring rolls filled with duck, ginger, and pickled cucumbers ($8.50).

“My advice is to skip dinner, just order two appetizers, and call it a day,” suggested one trendy friend, who swept in to Zin on its opening night and had “a very delicious, but very expensive, meal. I could have had a massage and a manicure for what I paid for rack of lamb and crème brûlée.”

I wouldn’t skip dinner at Zin, but I wouldn’t sacrifice an appetizer or two either — especially the single grilled sea scallop, bigger than a jumbo marshmallow, floating on a puddle of a spicy carrot sauce ($9), or a plate of rabbit-sausage slices, smoky and delicately spiced, poking out from a bed of fresh field greens ($12).

Even before these arrived, the server had presented, with a great flourish, a tiny glass bowl of tuna tartar served with a dollop of jade-green caviar, lightly flavored with the pungent horseradish essence of fiery wasabi. Appetizers are just the curtain-raiser of a theatrical dinner at Zin; the overture starts with the very act of being escorted from the front door or the tiny bar area by Pryor himself through the dining room (where on one occasion, a local heiress held court at the center table as if she were a film star) to one of the smaller, window-side tables on the perimeter of the stark room. A silver air duct snakes through the high, black ceiling and over the kitchen (with its open door, revealing plenty of hustle and bustle), and narrow strips of light peek through a baffle of Baltic birch.

Once upon a time, this corner of the 90-year-old building served as a drugstore and, during World War II, a place where servicemen could sip Cokes and listen to Glenn Miller records. In its newest incarnation, the space is a high-drama stage set for Rash’s food and lots of posturing by the clientele, who are thrilled to be dining in Coolsville and obviously don’t mind paying for the privilege.

There is a kind of smug glamour associated with sitting at a lovely table in an elegant room, nibbling on a salad of baby spinach, pancetta, and crumbled goat cheese ($6.50) and watching through the tinted windows the grittiest of urban life pass by outside: homeless men clutching bottles wrapped in brown paper sacks, or the young patrons of the hot new nightclub across the street, mostly wearing jeans and flannel shirts. The latter, in their uniforms, stared back at us, in ours (all black, like Halston or Johnny Cash), and scurried off as we returned to our salads in embarrassed silence.

But that awkward moment passed as quickly as the salad course, and suddenly dinner arrived, the plates as tidily composed as a Whistler painting, the portions a bit more generous than I had been led to believe. How could anyone leave here after an appetizer, bread, salad, and dinner and still want a hamburger?

Certainly not me, after diving into carved slices of roasted duck breast, lean and luscious, on a bed of sauteed spaghetti squash, accompanied by three wedges of lightly caramelized apple and a splash of a balsamic date compote ($26). My friend went into rapture over the grilled beef tenderloin and roasted potatoes ($28). The portion was tiny by Hereford House standards, but by Zin standards, the perfectly grilled slices of beef, tender and juicy, were just what they were supposed to be: art on a plate.

I’ll have to wait until I win the lottery to sample the rack of lamb with garlic whipped potatoes ($35), though at $18, a dish of Picasso-like “free-form” lasagna, made with saffron pasta and grilled vegetables, is a relative bargain — by Zin standards.

The desserts are fair, not nearly as showy as would be expected. I should have guessed that any restaurant offering “free-form” lasagna would have to do some architectural tinkering with the ubiquitous tiramisu, that wonderful marscapone cheese, whipped cream, and chocolate dessert that has been mangled by most local restaurants (including a ridiculous cone-shaped version at a now-defunct hotel’s dining room). Zin serves it parfait-style, in a wineglass. This presentation makes the dish awkward to share, and it’s more of a trifle than a dessert. I say it’s a cop-out to serve any dessert in a wineglass, even in a restaurant called Zin.

Much, much better was the ginger-cinnamon crème brûlée on another visit: a rich, eggy custard under a crisp blanket of spicy burnt sugar. (With a cup of coffee it cost $8 and was worth every cent.)

Zin is a jazzy, exciting place with a slick energy and an expensive menu. The question will be whether it will survive its rosy beginning and remain a hip, happening, and artistic place.

That’s a story that has yet to be told.