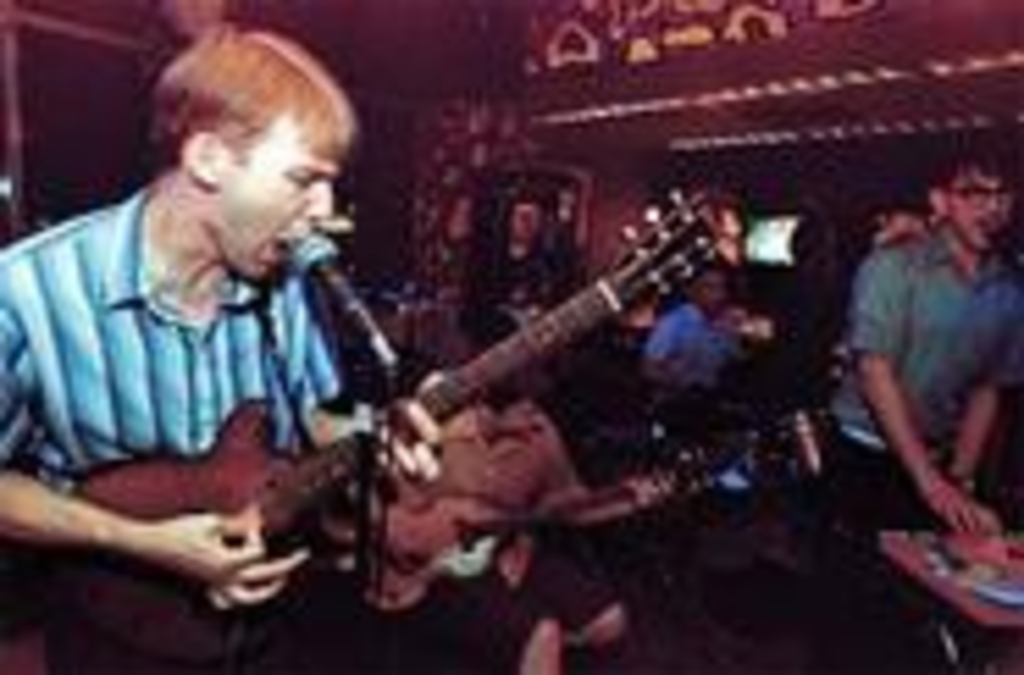 Garage rock is one of those genres that can fool you, the fan, into thinking that if you’ve seen one band, you’ve seen them all. That’s not entirely untrue because, like its punk cousin, garage rock retreads the same well-worn chords repeatedly. Add to that the fashion prerequisites one must meet to be a true playa in the garage and it wouldn’t be that hard to convince yourself that the short-sleeve-oxford-wearin’ geeks in the first band had stayed on as the headliners. When it was announced that legendary local swingers The Hefners would open for The Woggles, one of the genre’s most revered acts, there was an opportunity to put this rock theory to a test.

It wasn’t so much the heat as the humidity inside the Replay Lounge Wednesday night that made the audience cranky — and made the bar even more putrid than normal. Oddly, these conditions seemed to work in The Hefners’ favor, and any slight advantage was quite welcome from the perspective of Billy Hefner, whose broken leg forced him to play the sit-down bass. The bi-pedal members of the quartet all made up for Billy’s lack of mobility with a frantic performance punctuated by Bobby Hefner’s skin-pummeling antics and Bryce Hefner’s convulsions behind the keyboard, but neither of them could keep up with L.J. Hefner as he struggled through a personal ballet that left him careening around the floor like the pinballs in the machines surrounding him. All this motion left the music playing second fiddle to the mania that was spreading though crowd, which is how a good rock and roll show should be, and how many garage shows turn out to be, so our theory was still up in the air.

However, The Woggles would disprove this hypothesis in an instant, making what seemed to be a great opening band suddenly look merely very good. The Athens, Ga., four-piece played a set that mirrored The Hefners’ in many ways, but this group knew how to back off a bit on the ferocity and inject a little bit of soul. Buzz “Bomb” Hagstrom’s bass was the cornerstone of this Southern sonic temple, providing a punch to the Woggles’ attack and giving The Professor and the ladies in the front something to dance to. Unencumbered by a guitar like L.J., his Hefner predecessor, had been, The Professor was free to get his groove on, to alternately mosh with and work the crowd, and in the process pull off a classic, almost Newton-esque move that showed the experience of 13 years on the road. The move (do not try this at home): middle of a song, three Woggles jamming, The Professor bellies up to the crowd, takes a knee, looks up at woman who’s been writhing all night in the front row, taps writhing woman on hip, and motions for her to move aside so he can serenade and look into the eyes of the girl behind her. And that, ladies and gentlemen, is why they call him The Professor. That’s also why fans of garage rock consider it the most hedonistic, lustful, salacious blend of soul and surf rock around, and Wednesday night the Woggles proved why these same fans consider them the best. While they were at it, they put that pesky theory to rest and showed the Hefners and the rest of us what to strive for — all the stuff that pissed you off about church but with sex and alcohol replacing all the guilt and watered-down wine.