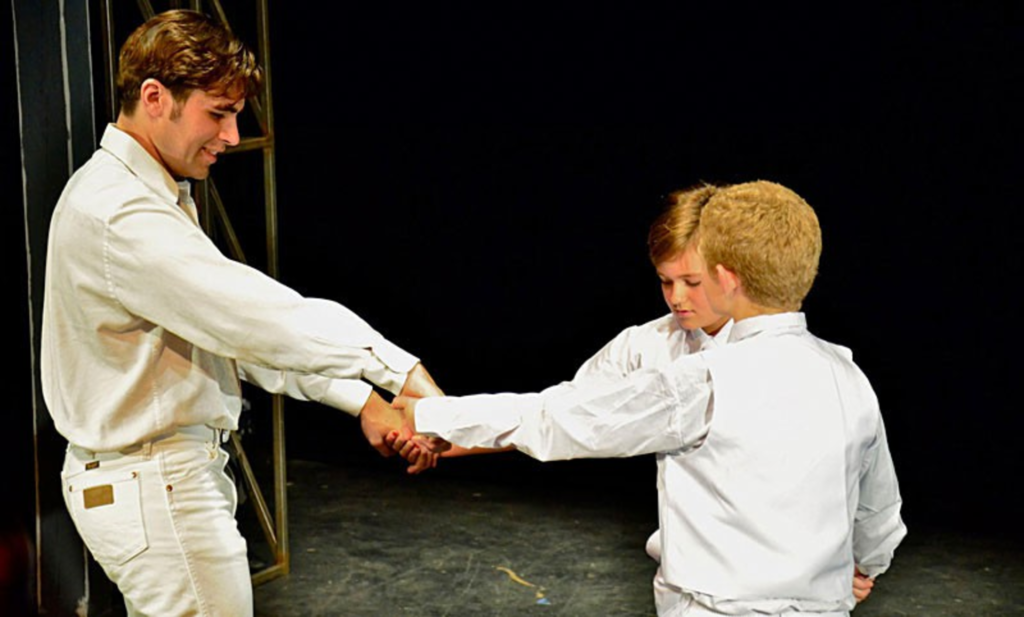 Pete Townshend turned 66 years old last week, coinciding with the Metropolitan Ensemble Theatre’s spring musical: The Who’s Tommy. The production has its issues — imagine an entire Broadway musical squeezed into a New York studio apartment and you have a good idea of what the show feels like. But the MET proves that Tommy still has it.

Tommy began its multi-platform odyssey (1969 album, 1975 movie, 1993 Broadway show) with the music, and that’s where this production starts. The MET’s seven-piece band (called the Whom, under Darin Parker’s musical direction) is amazingly successful at replicating the Who’s bludgeoning attack. Taking on some of the most propulsive, high-­powered, instantly hooky music ever written, the Whom, though hidden from view offstage, lays into it full force and clearly has a blast. Unfortunately, the sound mix is not on the side of the singers, judging from where I sat. There were times when the performers had a hard time punching through the wall. It didn’t help that some microphones sounded crunchy and others foggy.

Tommy is burdened with a long, expository beginning, which crams a dozen scenes into the first 10 minutes. On the MET’s small stage, this means lots of furniture and props squeaking in and out of a minuscule space. Still, the best scenes are the group numbers, when most or all of the 29 cast members are dancing and singing at once. Have I mentioned that there are 29 cast members?

From the front row, the show suggests an Imax 3-D movie viewed from 2 feet away. It isn’t just the proximity of the audience to the performers but also the close range of everything onstage to everything and everyone else onstage. In a space better suited to intimate drama, there’s no way to build out, so Tommy has built up, adding a catwalk just under the ceiling. It’s a solution, but it contributes to the production’s breathless feeling of constriction.

You have to hand it to director Karen Paisley for tackling such an enormous project. Dozens of scenes, all those actors, more than 100 costumes (Georgianna Londre seems to have had particular fun with the men’s Carnaby Street vests), and big, big music.

Despite all this, Paisley’s cast sells it, performing with energy and spirit. Sam Wright does a good job with what is essentially a passive hero. As Captain and Mrs. Walker the big-lunged Nathan Granner and Katie Gilchrist never have a problem blasting through. They are especially excellent together on “I Believe My Own Eyes.” Gilchrist’s Mrs. Walker could be played with rougher edges — she’s a pretty negligent parent, leaving her son at the mercy of a pedophile uncle and a bullying cousin — but her milder version doesn’t hurt the show.The ludicrous plot doesn’t, either, which misses some emotional beats in this breakneck production. Again: no matter. Tommy isn’t a show about characters or story. It’s about that energy and spirit and the driving, irresistible music. And on that front, the MET pulls off, despite the odds, a show to see and feel.

The unlikely partnership of the Living Room, the Crossroads’ bad-boy theater outfit, and Lidia’s, the Crossroads’ genteel purveyor of vast Italian feasts, has produced an even more unlikely offspring: brunch theater. After partaking of the weekend brunch buffet downstairs, theatergoers adjourn to a small party room upstairs (along with their desserts and drinks) for The Accidental Waiter, a mostly silent improvisational comedy that hearkens back to the silent-movie era.

Matt Weiss stars as a Charlie Chaplin-like hobo who seems to have climbed out of his boxcar at Union Station and found his way to Lidia’s. Weiss is an affecting, inventive physical comedian with an impressive roster of physical tricks, from pratfalls to coat-tree balancing. Marty Honig plays opposite him as a Giulietta Masina-type waif-clown, one part pathos to two parts whimsy. Alan Tilson is the stern house manager, and director Alex Espy is a mischievous, boat-obsessed little boy. Mark Lowrey’s talented keyboard improvisations, which occasionally dip into the theme from Titanic or Gilligan’s Island or ER, hold it all together.

There are lovely comic bits between Weiss and Honig, but it’s the second-half free-for-all between Weiss and Espy that’s genuinely inspired. The props are the things at hand: The coat tree becomes a mast, a tablecloth is made to be a sail, napkins are cannon fire, and a vase is a spyglass. The hobo and child are carried away by imagination, and we are, too.