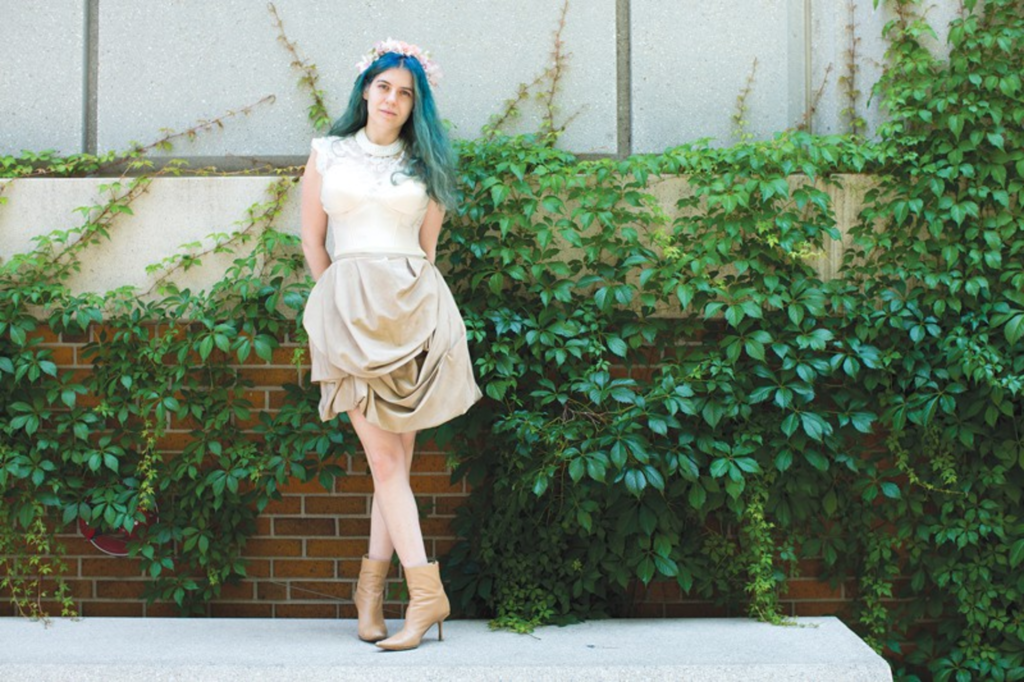 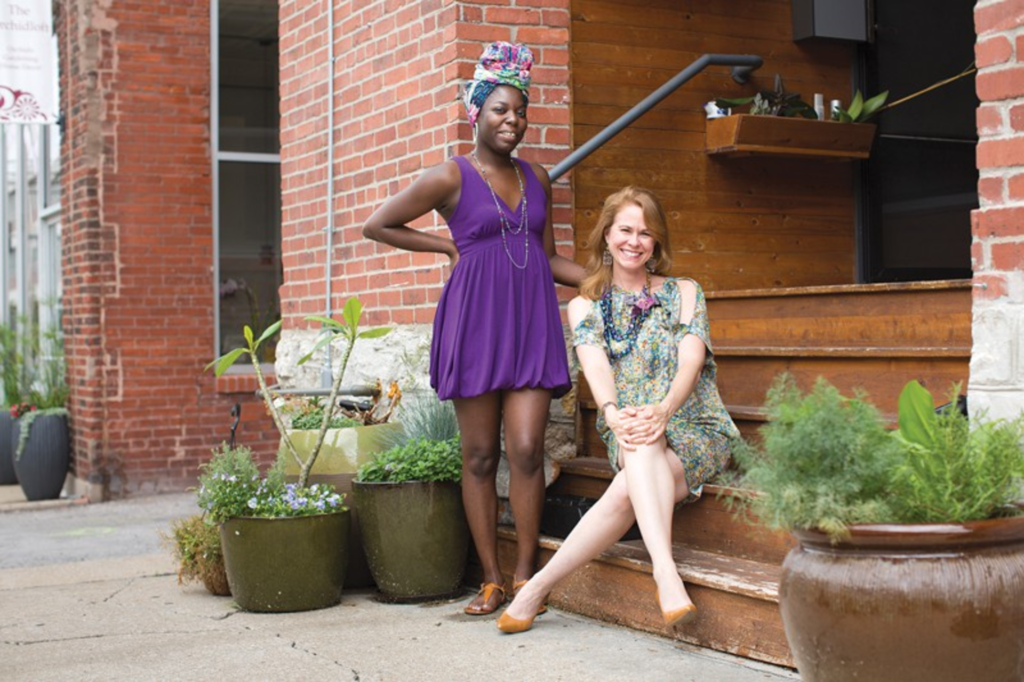 Judgments are being handed down inside Tannin Wine Bar & Kitchen.

Garment designer Ebony Harvey and accessory designer Erin Stegman head for the corner near the wine lockers. Both are newcomers to the West 18th Street Fashion Show and its processes. With dresses and jewelry in hand, they begin showing their in-progress collaboration to the show’s lead producers, Peregrine Honig, Mark Southerland and Hadley Johnson.

Harvey’s bold African prints, alongside Stegman’s copper and melted-acrylic pieces, delight the trio — at first. Then Harvey shows Honig a cellphone image of the scarves she envisions atop her models’ heads, and the mood shifts.

“Head scarves with this material is such a typical thing to do,” Honig says, her voice urgent. “It’s very conformist. A head scarf here — it ends the conversation.”

Honig smiles. “Awesome. You’ll come up with something together,” she says.

This kind of exchange goes on for hours at the West 18th Street Fashion Show’s Designer Meet, Greet & Critique, an evening in early May that some are bound to feel is more critique than meet. It isn’t just first-timers such as Harvey who come for a gut check and leave with a new imperative. For 13 summers, the unexpected has dominated an outdoor runway on West 18th Street in the Crossroads. Tonight at Tannin is where the unexpected — the visionary and the provocative and the discussion-provoking — begins to flower.

Saturday, June 14, the 14th annual West 18th Street Fashion Show highlights two dozen local designers. The pieces they’ve created are this time based on the theme “Ceremonial Summer” — ceremony being one way that society marks time. Celebrations, transitions and progressions are the ideas behind some of this year’s designs.

“Today we live in a world where how we spend our time and the freedom of choice we have to our journey is priority,” Johnson says. “We are not following in the steps of the generations before us but choosing our own dreams and new ways to attain them. This theme supplied larger boundaries for designers, which created space for the designers to be true to their world and be a part of a world we are creating on the West 18th Street runway.”

Maegan Stracy pulls a garment bag off the rack, unzips it and reveals part of her world: a satin boxing jacket embroidered with “Don’t Need No Hateration.”

“I was listening to the Mary J. Blige soundtrack while working on this one,” she tells The Pitch during the critique event.

In building her collection, she sought a fresh perspective on ritualistic aspects of textile production and sports in modern culture. Thus, the boxing jacket.

“How many jerseys with numbers on the back do we really need?” she asks.

For another piece in her collection, she has digitally rendered a turquoise-and-white design, printed it on a scrap of shag carpet and placed the carpet on a plastic dress.

“We tend to have a very specific experience with a material like carpet, and here I’m trying to elevate that experience,” she says.

Stracy, who is presenting at the show for the third time, consistently incorporates unconventional materials — mylar, say — into her designs. Her experiments extend beyond materials, too. In the past, she has filled quilted-silk-organza pieces with water.

“The water thing started when I was using all these see-through materials,” she says. “I thought, ‘What could I do to make this more interesting?’ So I started putting all this stuff in and on the materials.”

A Kansas City Art Institute fiber graduate who has shown at Fashion Week San Diego, Stracy has built a name for herself in the local fashion industry. She’s part of a six-person panel, billed as “Kansas City’s brightest fashion professionals,” in a Thursday, June 12, discussion.

Johnson thinks that Stracy has hit her stride with her latest show collection.

“Her willingness to strive for her vision in both concept and craft is very impressive this year,” Johnson says. “The collection is fun to watch and wear, which is what we want fashion to be.”

We’re only being hard on you because we think you have one of the most interesting collections,” Southerland tells Rachel Gottlieb during her critique.

The producers have spent the past several minutes explaining to Gottlieb that the first piece in her collection isn’t working. She has set out to chronicle the progression of aging skin through five pieces. She hoped that dress No. 1 captured the innocence of young skin, but the producers have declared it boring. Johnson leaves Gottlieb with a challenge: “You need to do something insane.”

Gottlieb’s focus on skin emphasizes her own preferred state.

“I’m a nudist and a fashion designer,” she says. “It’s a contradiction, I know.”

For her show collection, she has poured 100 hours into hand-ruched silk garments to illustrate the wrinkling of skin.

“Every item has a little piece of my soul in it,” she says.

She has relieved the intensity of her work by taking walks on the vast Peculiar, Missouri, property where she lives. Gottlieb, a New York native and Fashion Institute of Technology graduate, left the East Coast for the countryside less than a year ago, when she moved in with her boyfriend. In this setting, she has found answers.

Her collection now opens with a full-length chiffon gown. A sheer top gives way to a mermaid skirt. The look, she is confident, will make a strong runway statement that achieves the desired insanity. Now, delicate garments contrast punk-rock hair and makeup. Cornrow mohawks are in the works.

“It’s going to be really dramatic,” she says.

Stegman gazed at the patterns and landscapes outside an airplane window, closed her eyes to meditate, then sketched her show collection with a sure hand.

“These shapes represent the doorways and passageways we travel through in life experiences,” Stegman says.

Two years ago, Stegman launched her accessories line, Erin Paige Designs, and she has since presented at Kansas City Fashion Week. West 18th Street producers paired her with Harvey for a natural accessories-garment union.

While this weekend’s show marks Harvey’s runway debut, she has spent many years working behind the scenes of West 18th Street as a seamstress. She credits the opening of Coming to America with inspiring her energetic collection. Loud patterns, wax sheen and lace dominate her pieces.

“I want people to look at my collection and see strong women,” she says. “And I’m trying to show that women can be strong, feminine, playful and girly, all at the same time.”

“We just need a little bit more flair,” she says. “We’ll land on something different — that’s what West 18th Street’s all about.”

For details about the show, see west18thstreetfashionshow.com.