The Virgin Mary hasn’t yet appeared at Blue Grotto, but give it time 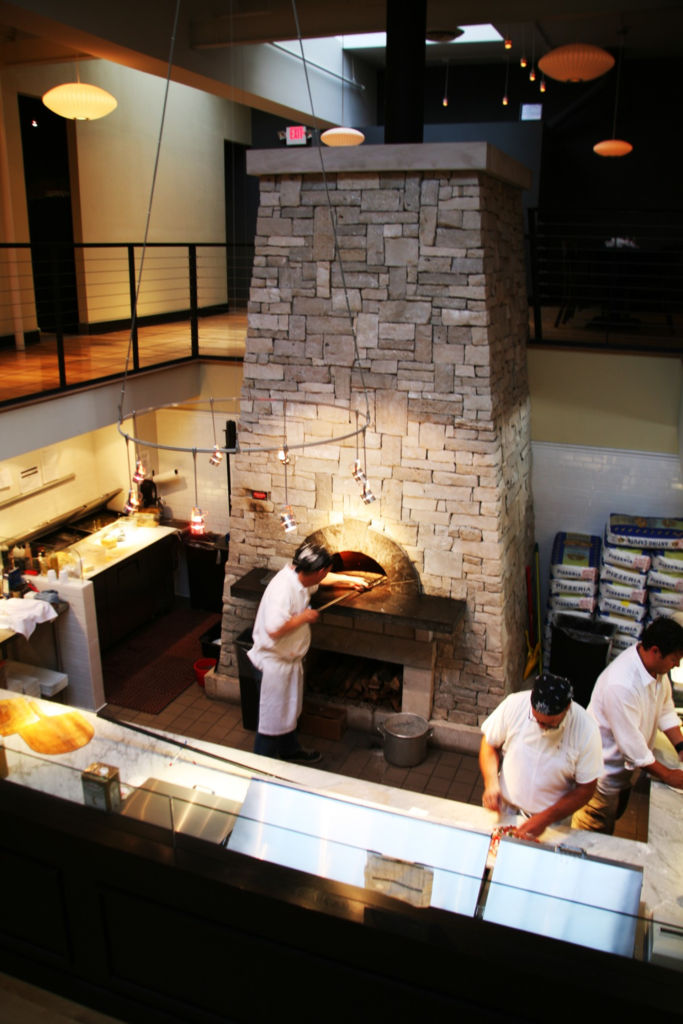 I’ve always felt that Kansas City, because it has plenty of underground caverns, needs more grottos. One of my favorites is the Grotto of the Virgin Mary at 3520 Garner in the Historic Northeast. After an apparition of Mary appeared to the homeowner two decades ago, she had a stone-and-concrete grotto built around a department-store mannequin and surrounded it with a chicken-wire fence. The Catholic Church hasn’t acknowledged the sighting yet, but it’s plenty sacred in my book.

Unfortunately, I can’t think of a local restaurant in a genuine grotto, though such a setting would undoubtedly be alluring. Alas, the two-month-old Blue Grotto in Brookside is neither blue nor cavelike. And I didn’t have any religious visions when I dined there, although my heart skipped a beat when I thought I detected, on one of the pizzas, a vague outline of Saint Martha, patron saint of cooks, waiters and waitresses, in the black olives. Unfortunately, my friend Patrick ate that slice before I could say a novena.

Now that wood-fired pizza has become the chic cuisine du jour here in Kansas City (think Spin or Pizza Bella), it’s not enough to settle for mere pepperoni and processed Provel on a chewy crust.

As someone who grew up in the age of Noble Roman’s and Pizza Hut, I’m both amused and delighted by the evolution of pizza from the oily, gloppy slab served in high school cafeterias. I guess we have Wolfgang Puck’s Spago to thank for that, although the real creative force behind Puck’s fame was pizza chef Ed LaDou. Puck and LaDou reinvented the standard — and boring — Italian-American version of Neapolitan flatbread. Instead of traditional ingredients, the Spago crew started serving innovative and fashionable creations topped with smoked salmon or duck sausage and hoisin sauce. LaDou, who later developed the debut menu for California Pizza Kitchen, died in December at age 52.

I hope just a little more of LaDou’s spirit wafts into the exhibition kitchen at the Blue Grotto. There, chef Chris Graham (who is also one of this restaurant’s partners, with John and Michelle Greer) creates nine excellent house pizzas topped with appealing ingredients — though only the champagne-caramelized onions seem particularly unusual or sensual.

It’s impossible not to like the place, because it has so much going for it — 360 Architecture has given the soaring, two-story space a sleek interior in tones of charcoal, slate and ebony. It’s a little unnerving, however, to walk through the narrow bar at the entrance. When this place is busy, it’s like running a gauntlet to the stairwell where the dining area officially begins.

I’ve eaten in both the upper- and lower-level areas and prefer the first floor, which is slightly less noisy than the balcony. Admittedly, the night I was eating upstairs, it went from loud to positively cacophonous in less than an hour, when many guests arrived for a bigwig attorney’s birthday party on an adjoining mezzanine. Those lawyers were drinking and talking with such gusto that I finally gave up trying to have a conversation with my dinner guests, and we ate in silence.

“We’re still working out how to effectively deal with the large parties,” a manager told me later. I guess that’s what happens when a restaurant becomes popular as quickly as the Blue Grotto did. Graham and the Greers found a niche in the Brookside dining scene for a sophisticated pizza parlor that’s upscale yet laid-back and certainly family-friendly — not as kid-friendly as California Pizza Kitchen, but that’s not the scene these owners age going for. (There are several other unfilled niches in Brookside, by the way.)

I can see why the partying attorneys would be drawn to Blue Grotto. For Brookside, it’s very hip. And even though it’s more expensive than Pizza Hut and Pizza Bella, it’s worth it! The crust is light and slightly crackly, and a couple of Graham’s creations — the Four Seasons and the salsiccia (or sausage) — are as pretty as a Paul Klee canvas.

The night I dined with Carol Jean and Donna, they sipped Benvolio pinot grigio (a stingy pour, we agreed), and we nibbled on one of the four starters: a torte with sun-dried tomato and goat cheese, with chilled layers of chevre and cream cheese and surprisingly sweet sun-dried tomatoes served with crackers. Cheese and crackers before pizza? What were we thinking?

The quattro formaggio was generously topped with bubbling ricotta, asiago, aged Gouda and goat cheese and extra-virgin olive oil. It was simple and good.

For his Four Seasons pie, Graham divides the surface into quadrants: one has only black olives, another roasted red peppers, the third marinated artichoke hearts and the fourth roasted crimini mushrooms. It’s not the easiest pizza to share if someone wants to taste each of the seasons, but three of us ate right through the year.

On another night, Patrick, Gary and I dined upstairs. We shared the marinated artichoke dip, after our server explained it was a cold dip — not that hot, bubbly mess served everywhere except McDonald’s these days. It’s a nice, Good Housekeeping–style recipe with chopped-up artichoke hearts mixed into a paste with parmesan and sweet peppers; the portion was petite, but the price was not. Other starters include the three salads, all of which use whole-leaf romaine, which is attractive in theory but requires a lot of work to eat — all that damn cutting! The Greek version is the best of the three, with little patties of goat cheese rolled in chopped walnuts, sliced cucumbers, onions and olives in a punchy vinaigrette.

And the pizza was terrific. The choices aren’t overwhelming; I’ve eaten enough Margherita- and marinara-topped pie to last a lifetime, so they were out. Gary likes prosciutto, so we opted for that one, which balances the salty pressed ham with sweet red onions and slightly nutty asiago cheese. The salsiccia pizza is not only beautiful to look at, it’s topped with an excellent fennel sausage and those succulent caramelized onions. It was the high point of the meal.

That’s partly because we hated the dessert. The menu lists only two, and both involve Nutella, which I detest. One of these offerings was a cute spin on s’mores made with fat, melty toasted marshmallows and that “creamy, chocolaty hazelnut spread” squished between graham crackers. Visually it’s unimpressive, and even Patrick and Gary, who don’t mind Nutella, concurred it wasn’t much in the taste department, either. This isn’t the only local restaurant offering this novelty item, and I have one thing to say: I ate and even liked s’mores as a Boy Scout, but I’ve now reached the age when I don’t want to see them again in any fashion.

But this restaurant is still a work in progress. More desserts, I say. And more interesting pizza! One of the late LaDou’s theories about being allowed to create unique pizza for Spago was that it was like being an artist who had used 10 colors all his life and suddenly got to use 300.

Will someone please give chef Chris Graham more colors?