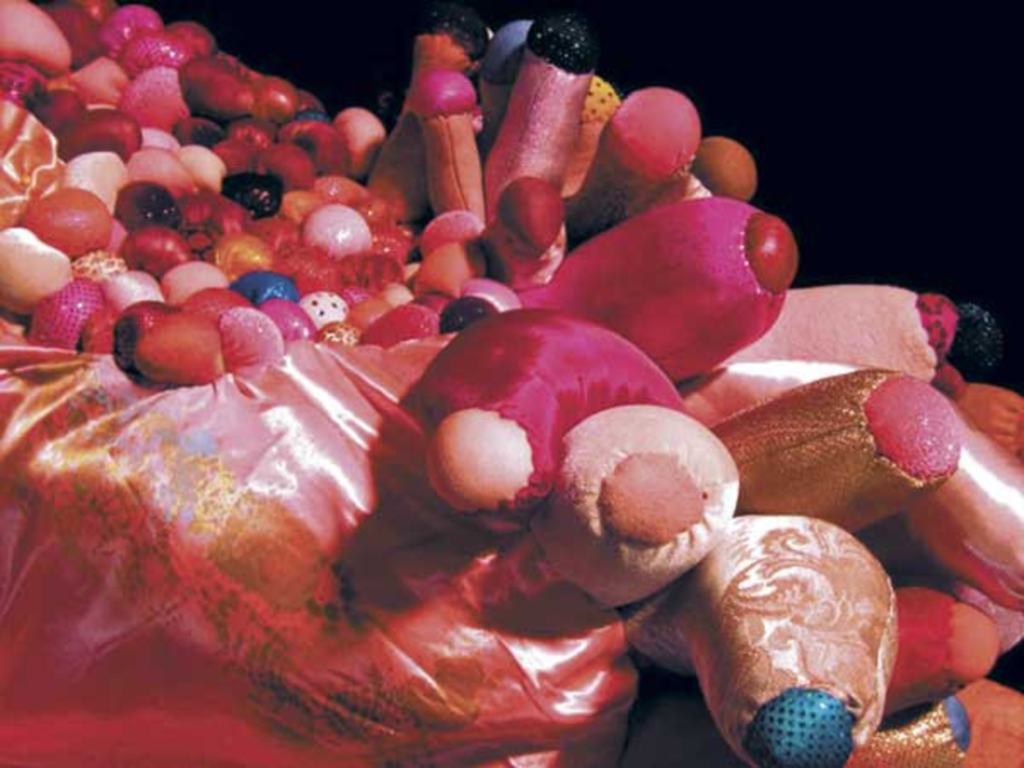 Lee Piechocki’s series “I’ve Been Crazy This Week” is eight postcard-sized drawings done in a faux naïve style. The brightly colored doodles are abstract narratives of maladjustment, discontent, chaos and anarchy rendered in pinks, blues and other happy childlike colors. They are whimsically absurd.

Also at Paragraph is Piechocki’s “Still Life” series of small, 11-inch-by-14-inch paintings, all of which share the same image of a white laboratory table. Dramas and narratives occur on and around it: “Still Life with Stag” shows a bloodied dead deer on the table; in “Still Life With Mask,” a little monkey-faced mask and an orange bicycle flag rest on the table alongside other accoutrements that make no linear sense. Spare and predominantly white, these slick-surfaced wood-panel paintings are satisfying in their ambiguity and — why not — their references to 17th-century Dutch still-life paintings in which tables are laden with the loot of a rising middle class. Piechocki’s tabletop is a much more dangerous and indeterminate site.

Piechocki and the four other artists in Painterly La La are residents in the Urban Culture Project Studio Program, which awards artists free studios for one year. Theoretically, opening their studios to the public every third Friday gives the artists and the public a shared experience and an exchange of ideas.

Piechocki’s paintings, along with those of Nicole Mauser, appear in short but effective series, offering the viewer an excellent context for understanding the works. Mauser’s paintings on board (a few of which are primarily black) reflect her affinity for surface and suggest an ambiguous territory of geometric forms and a vacuumlike space. In “Fever Disco,” small glyphs of color occur in a discrete corner, allowing the black surface to become the most significant part of the work; the strategically placed squiggles of color establish proportion and a certain “hereness.”

The other three artists work in varying degrees with installation. Stewart Losee employs painting on nontraditional surfaces and uses installation components such as logs and other wood items on the floor in front of the paintings.

Eli Borrowman’s gigantic piece dominates the gallery. With a few yards of hot-pink fabric, stuffing, wood and other materials, Borrowman’s “Re-acclimation of the Body; Decadent Veneers” both repels and attracts. Oddly and even delightfully lifelike, one of the pink blobs hangs from a cantilevered ceiling panel. Sprouting tubes of fabric borrowed from Louise Bourgeois (whether knowingly or not), the piece feels capable of movement. Borrowman’s forms also disintegrate, allowing stuffing and other interior, structural elements to emerge from the ripped fabric — an aspect of the work that’s less appealing than the overall impact of the forms it borrows from surrealist territory. Though Borrowman is represented by only one work, it’s successful enough to allow us to understand her impulses and how she’s working.

Conversely, Sarah Vandersall’s installation suffers from lack of context. The cumbersomely titled “Engineered from no-man’s land to return to the softness of your skin” consists of camping and outdoor implements tacked to the wall. Without knowing Vandersall’s work or having another of her pieces to provide ballast, this piece seems incomplete, dissociative. This piece may be a great moment of growth for the artist, but in an exhibition such as this one, where the curators may desire a new audience for their artists, providing that audience with the tools for understanding those works would be helpful. Otherwise, the exhibition begins to suggest an insider elitism to which one hopes the Urban Culture Project is opposed.