The unlikely resurrection of “The Darkness,” an obscure ’60s heavy-psych single from Clinton, Missouri 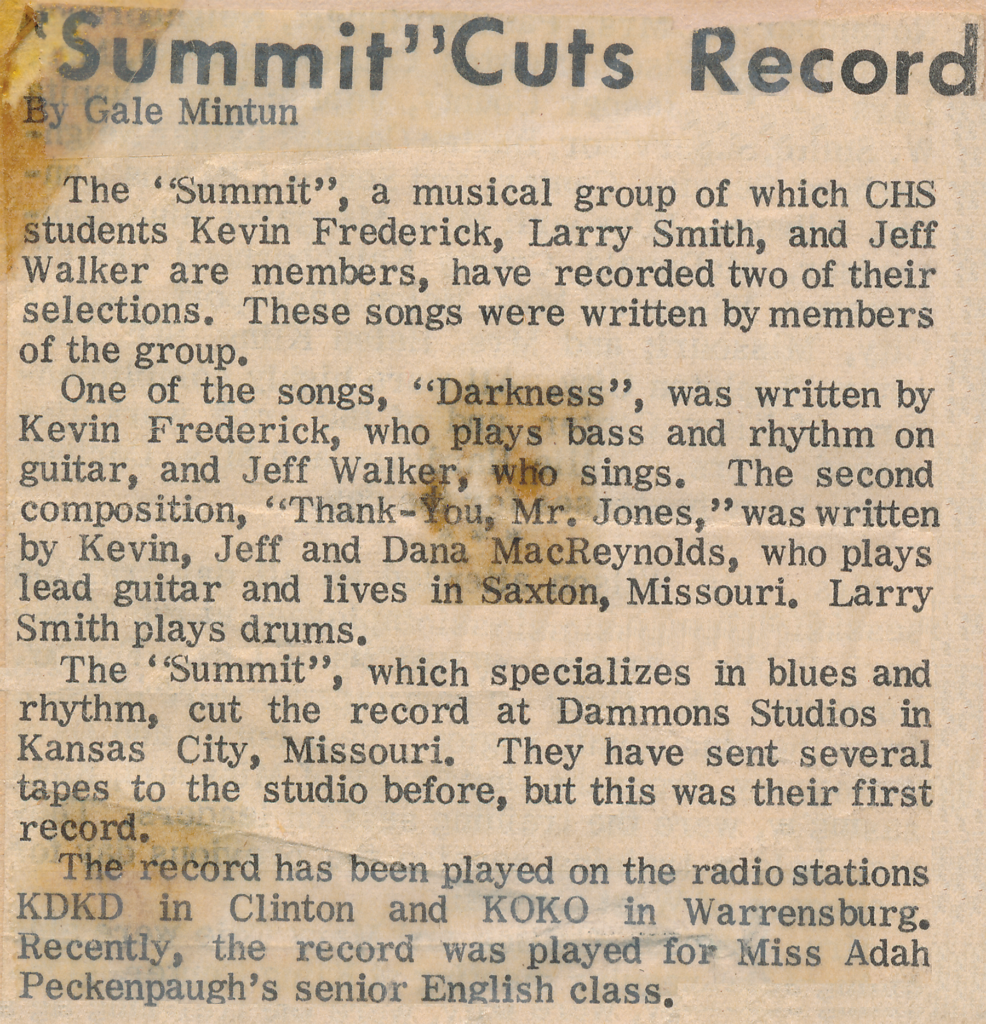 Almost 50 years ago, a quartet of teenagers walked into Kansas City’s Damon Record Studios on 14th Street to make a record they hoped might be the start of something great. They’d come from a small town called Clinton, Missouri, in the middle of the state, about an hour and a half away. They called themselves The Summit.

“The studio was underground,” recalls Dana McReynolds, The Summit’s guitarist, on the phone from his Missouri home. “It was under a parking lot in some place in downtown Kansas City. You’d go to a door, and it was kind of like you’d walk into a telephone booth in a parking lot, and then you’d follow the steps down into the studio. It was really quite a nice experience. When you’re 16 and you do something like this, you wonder, ‘Wow, this is the beginning. Where is this gonna go?’”

McReynolds and his bandmates — singer Jeff Walker, bassist Kevin Frederick, and drummer Larry Smith — laid down two songs for a 45 that day. Frederick wrote most of the B-side, “Thank You Mister Jones,” a ballad-like tribute to the Rolling Stones’ Brian Jones, who had died about a month beforehand.

Were it just for that song, it’s likely The Summit’s single would have mostly been lost to time — a few fond memories for the boys who recorded it. But the A-side, entitled “The Darkness,” was something else entirely. It kicks off with a deeply toning bell followed by a crazy feedback effect that fuzzes all over the track. Cue the lyrics about skulls and blood.

Lance Barresi, the owner of Permanent Records, a record shop in Los Angeles, got turned on to “The Darkness” a few years back by a collector friend. (Barresi has local-ish ties — he used to work at Slackers, the Columbia, Missouri, record store, in the early 2000s.) Barresi also curates a compilation series called Brown Acid, which revives “heavy rock from the classic comedown era.”

“I have a weekly DJ gig at the Old Chalet in Eagle Rock and the idea for the comp came from DJing those nights and having people tell me I should sell the mix tapes I make,” Barresi says. “Instead of selling bootleg mix tapes, I went the extra mile to get the material licensed and issue it properly on vinyl, CD, cassette, and digital media with RidingEasy Records.”

Much as Pebbles dug up long-lost garage rock nuggets, or Killed By Death mined for obscure punk singles, Brown Acid sources all of that boogie rock, proto-stoner, hard-riffing music that rang out of garages and basements during the late ’60s through the mid-’70s.

Bands on the comps have hailed from across the country, with a strong representation from California. Though “Missouri isn’t a state that brought us a lot of heavy 45s,” as Barresi puts it, the sixth installment of Brown Acid included a song called “Give Me Time,” by the Kansas City band Backwood Memory, and on the upcoming Seventh Trip, the closing track comes courtesy of The Summit. “The Darkness,” the folks at RidingEasy Records contend, is “one of the very best examples of heavy psych you’ll ever hear.” 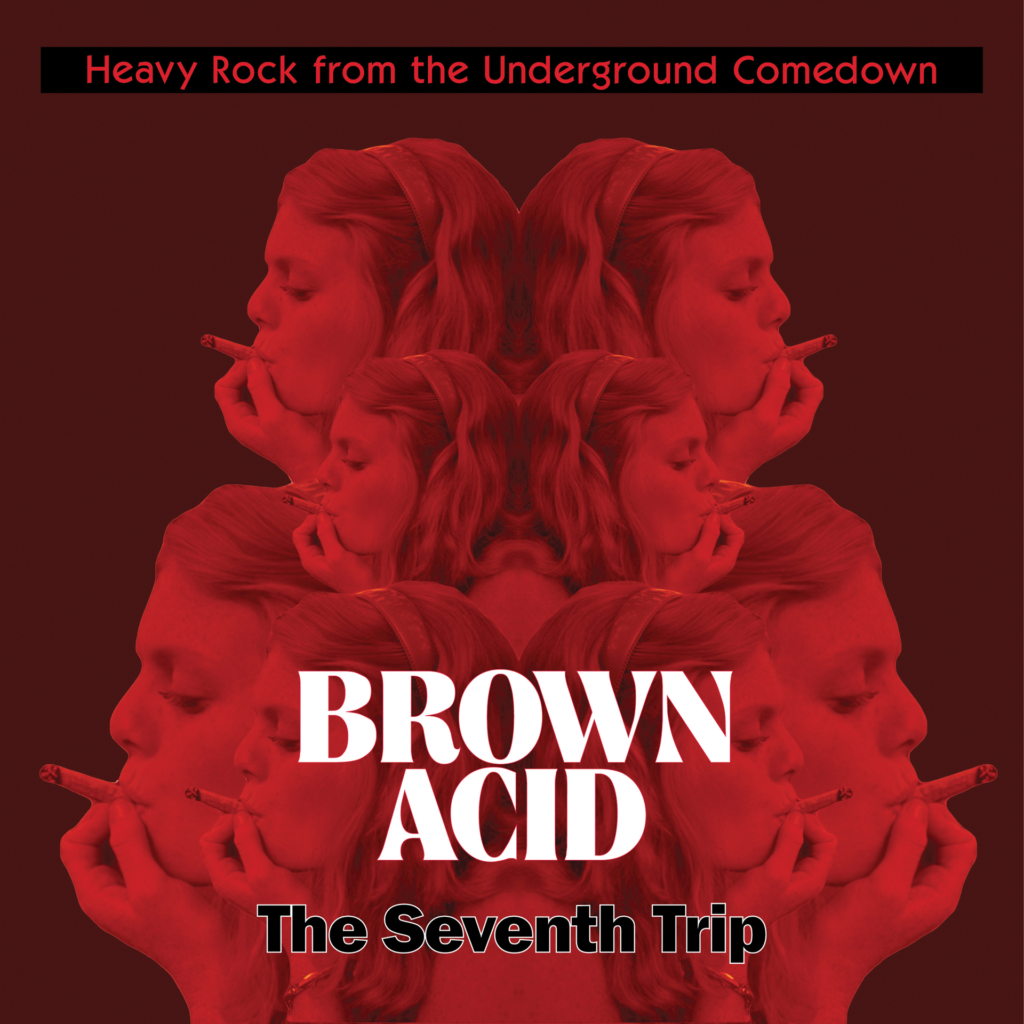 Who were these guys?

By McReynolds and Walker’s own admissions, The Summit wasn’t really a band at all. McReynolds likens them to Steely Dan, in that they “just went to the studio.”

“Dana lived in Sikeston, and we lived in Clinton, and that’s a pretty good commute,” says Walker (who now lives in Carrollton, Texas), of the 324-mile distance between the towns. “So, we weren’t what you would call a ‘working band.’ Whenever he was up, we’d get together and jam, and that was basically what we were doing when we wrote those songs.”

“I rode the bus from Sikeston to Clinton,” McReynolds says. “And the bus trip was fairly circuitous — the bus actually went down into Arkansas before it headed north. I remember it was a full-day trip to get there. When I got there, there wasn’t a bus station in Clinton. It was a bus stop. There was a street light post with a sign attached to it that said, ‘BUS STOP,’ and you just got off on the curb. Kevin and my uncle met me when I got there.”

The Summit, in fact, only ever played live once. “We did perform one time as a band, in a park in Clinton,” McReynolds says. “It was after Woodstock, because some local wits called our little festival Cornstocks.”

The single was recorded that day in Kansas City and pressed soon thereafter. Neither McReynolds nor Walker have their original copies, although McReynolds acquired some copies a few years back from Frederick’s widow. (Frederick died in 2003.)

Mark Prellberg was one of the first to get in contact with McReynolds regarding The Summit’s long-lost single. Prellberg, who headed up the Kansas City power-pop label Titan Records, used to appear on KKFI’s “Signal to Noise” radio show and play rare and vintage vinyl from around the Kansas City area. He heard about The Summit and their 45 in 2016 from a vinyl collector friend on the East Coast who sent him a YouTube link to “The Darkness.”

“I very much like[d] the record and began trying to track any former member involved with the band, to obtain a copy of the disc and find out their history,” Prellberg writes in an email. “It was extremely difficult to locate them, but after a few months, I got a lucky break and found Dana McReynolds’ brother, who forwarded me Dana’s contact info.”

Prellberg also passed along to McReynolds a photo he’d obtained of a Damon Studios log, which offered insight as to how many copies of the single might be out there.

Barresi also first contacted Walker in 2016. “Oh, it was very much out of the blue — almost didn’t answer the call,” Walker says drily. “It was a real surprise, I guess is a good way to put it. I was waiting in the wait room of a barber to get a haircut on the day I was contacted.”

“This whole phenomenon [of the song being resurrected] has been something that feels like it happens around me, but not to me, because I’ve never met anybody personally,” McReynolds says. “People have contacted me from Europe and I’ve never met any of my fans, personally, but it’s a story that I like to tell. That and $4 gets me coffee at the drive-through kiosk.”

These days, Walker’s a shipping clerk, and McReynolds retired in 2011 as the lead lab tech in an analytical lab in a coal-fired power plant in southern Nevada. He splits the year between Las Vegas and Bollinger County, Missouri. He’ll be back in Vegas by the time Brown Acid: The Seventh Trip releases at the end of the month, and says he’s looking forward to spinning it.

“I told my friends we’re going to have an album release party,” he says. “It’ll be a very small light in the sky in Las Vegas, but we’ll do what we can.”

Brown Acid: The Seventh Trip is out now via RidingEasy Records.