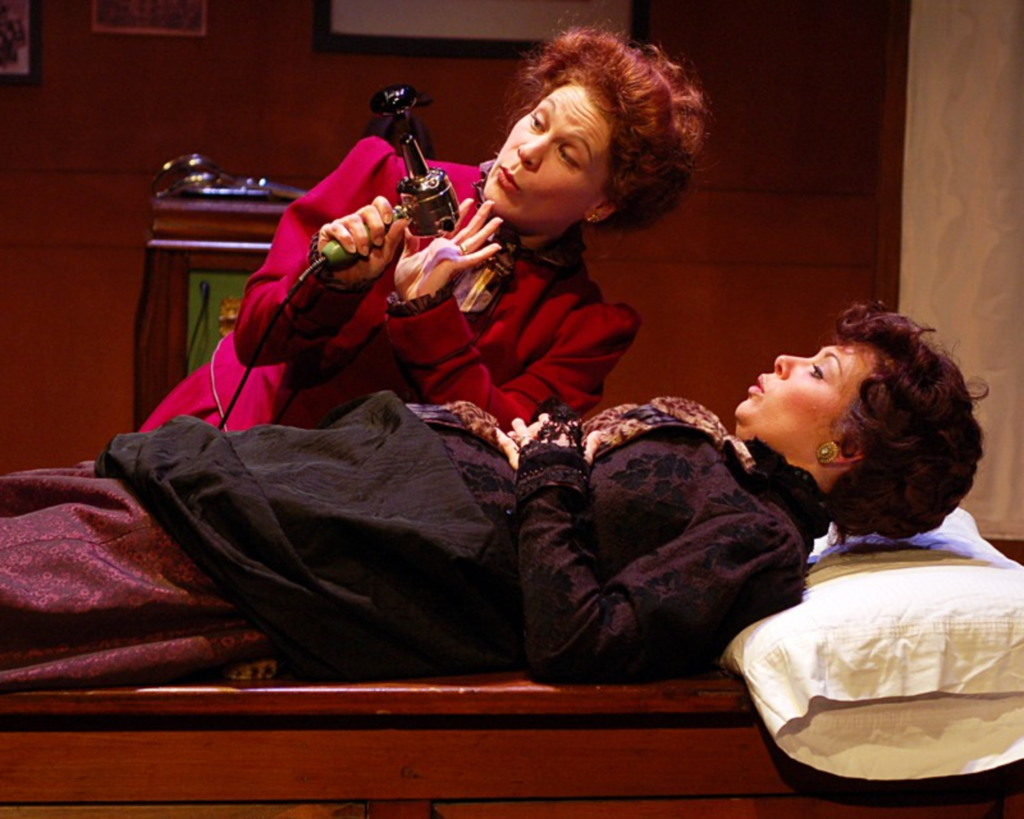 It’s hard, in our hypersexualized, innuendo-stiff era, to imagine the prelapsarian innocence that obtained among gentle folk in Victorian times, when men and women were ignorant of their own and one another’s anatomies, not to mention the mechanisms of coitus. Little wonder the malady of the age presented as a constellation of nervous irritabilities that doctors labeled hysteria, particularly prevalent among women of the leisure class. That this hysteria had anything to do with the brusque, silent sorties perpetrated upon them by their husbands in the dark of night seemed obvious to no one, not even the contemporaneous Dr. Freud of Vienna, who famously asked, as though it were an unanswerable conundrum, “What do women want?”

The doctor has had great success treating hysteria with medical devices of his own invention, which apply electrical vibrations to the area of “the womb,” releasing the pent-up pressure therein and causing paroxysms of relief. That these paroxysms might be at all associated with the conjugal exertions of the patients’ husbands is so preposterous an idea that the suggestion elicits peals of laughter.

The moans and interjections that issue from her husband’s office cannot but intrigue Mrs. Givings. What is this miraculous treatment, from which patients emerge flushed and invigorated, and why is it available to all but herself? Frustrated by Dr. Givings’ ungiving rectitude, Mrs. Givings refuses to be denied any longer.

Matthew Rapport makes the humorless Dr. Givings — pigeon chest, pedantic boom, a stern mien that expresses exuberance only in his facial topiary — hilariously self-important. In a carbonated performance by the inspired Cinnamon Schultz, Mrs. Givings is her husband’s opposite: garrulous, frantic, sublimating her voracious desires by “walking walking walking” in all weather. Despite her excess energy, she is unable to produce enough milk to feed her infant, an inadequacy she feels deeply.

The part of the baby’s wet nurse, a woman superior both spiritually and physically (abundantly lactating, sexually responsive), is deeply problematic, and Marion Bailey’s limp performance sheds little light on whether the role should be read as a subversive declension of the tragic Noble Negress
archetype.

Heidi Van is a scream as Mrs. Daldry, a patient who becomes quickly dependent on her doctor-facilitated release. Logan Ernstthal, Kelly Main and Chris Roady take fine comic turns as the clueless Mr. Daldry, the sympathetic nurse and a neurotic artist, each with a secret.

Despite the script’s turgid second act, the production, under Sidonie Garrett’s direction, works up to a pleasurable frenzy of misunderstood intentions and misdirected affections, though it doesn’t quite earn its visually poetic climax.

Blackbird, the taut, fraught two-person one-act by the aptly named Scottish playwright David Harrower, grabs one by the jugular the second the light snaps on. From there, it only tightens its grip in the committed hands of Scott Cordes and Vanessa Severo, each acting with perfectly gauged energy and stride under the direction of Living Room resident artist Bryan Moses. Moses has an obvious affinity for intensity — his previous projects include a firestorm of Neil LaBute Molotov cocktails — and with this play, he has made the brilliant move of pairing ruthless material with actors gifted enough to locate the grace in it.

Both their lives were ruined. His prison sentence served, Ray now lives under a new name, slowly clawing himself out of the hole, thankful for his unglamorous job and second-chance relationship. But Una has tracked him down, and what she seeks — revenge, closure or something else entirely — is unclear.

Harrower is less concerned with blame than with the strangeness of any human connection and with the ways that humans betray and harm one another.

Severo is incandescent, inhabiting her character like a flame in a lantern. The fact that she’s a more sophisticated type than the ingénues usually cast in the role brings an interesting dimension to the character. She gives a focused portrayal of the all-too-precocious girl she was, on the precipice of womanhood, with “suspiciously adult yearnings.”

Cordes (stepping in directly from the Metropolitan Ensemble Theatre’s One Flea Spare) plays Ray with bottomless subtlety and discipline, allowing himself not an ounce of overacting. Like a poker pro, Cordes shows all there is to know about his character’s need, weakness and dogged determination in deft, quietly signaled tells.

The best acting is listening, and Severo and Cordes hang on each other’s every word. What they make happen in Blackbird is bare, delicate and remarkably alive.