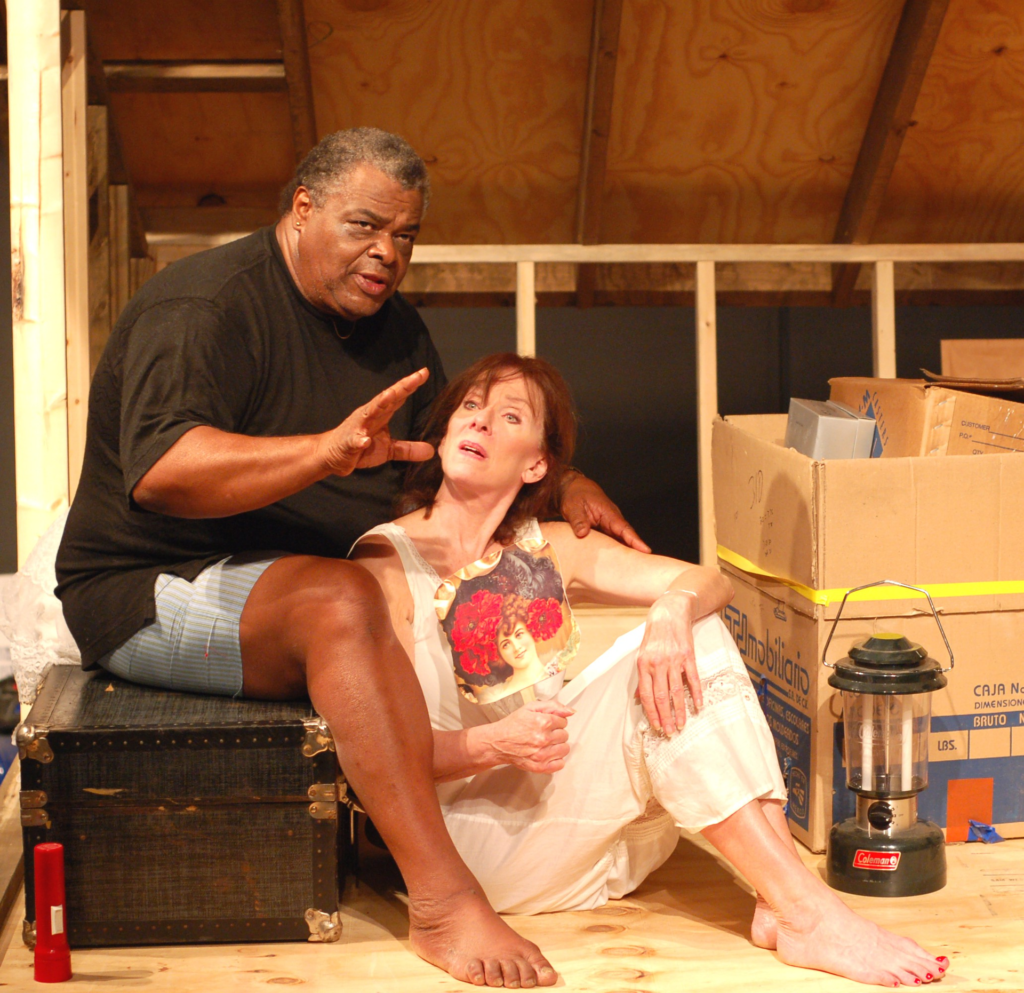 Last Friday, at the Kansas City premiere of John Biguenet’s two-character Hurricane Katrina drama Rising Water, I not only learned that New Orleanians are decent folks with gallows humor. I also learned that they’re so chill, they’ll watch their homes flood up around them with less alarm than most people feel about a spider in the bathroom. Hell, my cats got fleas last week, and I was more worked up than the Rising Water actors were as they searched for a way up out of their attic and onto the roof.

Rising Water, I’m sorry to say, is a grim start for what still looks like a promising new season at the Unicorn. It’s a two-hour show that makes the loss of an American city feel a little like being trapped in an elevator. As the water rises, our leads — Sugar (Danny Cox) and his wife, Camille (Merle Moores) — flirt and giggle in their attic. Sugar is dismissive of the flooding; he may be trying to distract his wife, but the writing isn’t sharp enough to let us know. They swap poetic but interminable monologues only dimly connected to the matter at hand. They paw and hug each other and come close to making love on her hope chest before instead moping vaguely about the fact that they haven’t had sex in ages. Which makes no sense considering the way their easy, intimate, turned-on handsiness doesn’t feel like some byproduct of fear but rather seems to be just the way these two are. They hardly complain as all their earthly possessions are swallowed by Lake Ponchartrain, carrying on like characters instead of people, saying impossible things such as “Maybe it’s not the end of the world outside. Maybe it could be for us a new world just beginning.” Worse, they allude portentously to ugly patches in their marriage that they’re unwilling to talk about in act one — meaning they’ll have to tick through them all in act two before we can go home.

If backstory were sandbags, that town would’ve been saved.

After intermission, Camille climbs through a vent and out onto the roof. But Sugar, who is of ampler carriage, can shove himself only halfway out. For a while, director Sidonie Garrett generates some drama. Gary Mosby’s rooftop set is appropriately precarious. (Lighted by Jeffrey Cady in moony blues, it’s also oddly beautiful.) We hear the water trickling — Benjamin G. Stickels’ sound design is subtle even as it reminds us, at almost all times, of the couple’s worsening situation — but we see no other roofs or lights, and we hear no life in the drowned city. Stranded, foodless and certain to bake when the sun comes up, Sugar and Camille at last comprehend the full horror of their plight. Moores, too often mannered here, is effective when Camille fights down her flutters of panic. Cox, who is stuck in his hole for most of the second act, has only face and voice to act with, but this is no impediment for the veteran performer.

The impediment is Biguenet’s script. Soon, the excitement of roof-versus-attic wanes, and Sugar is right back to telling lyrical stories that feel left over from Biguenet’s other projects. Some talk about the likelihood of rescue boats heartened me: Perhaps something would happen. Nothing did, and a couple of minutes later, I was back to wondering why the actors play characters who clearly adore each other when the script seems to think they’re miserable together.

Skip this paragraph if you don’t want to know what passes for an ending. Eventually, Sugar and Camille sing a song that Camille had earlier pretended not to know. They hold each other and sing more loudly, and then the sound and lights flourish. This lets us know the play is over. An unresolved ending like this might sting if everyone trapped on roofs after Katrina suffered the same fate. Because hundreds of people survived, though, this feels not just like a cop-out — it feels like Biguenet, a first-time playwright, has no idea how to dramatize what happens next.

Curious about how so slapdash a script could have been, as the program notes, “nominated for the 2008 Pulitzer Prize in drama,” I discovered after five minutes of Googling that Pulitzer nominees have all been publicly acknowledged by the Pulitzer committee as finalists. Rising Water has not. Instead, it is Pulitzer nominated, which means that someone sent an application on its behalf. It’s a sneaky, resume-padding claim, and even if the playwright can’t be faulted for how his work is marketed, the audience can’t be blamed for thinking: heck of a job, Biguenet.