The Unicorn and Fishtank put the tinsel in Tinseltown 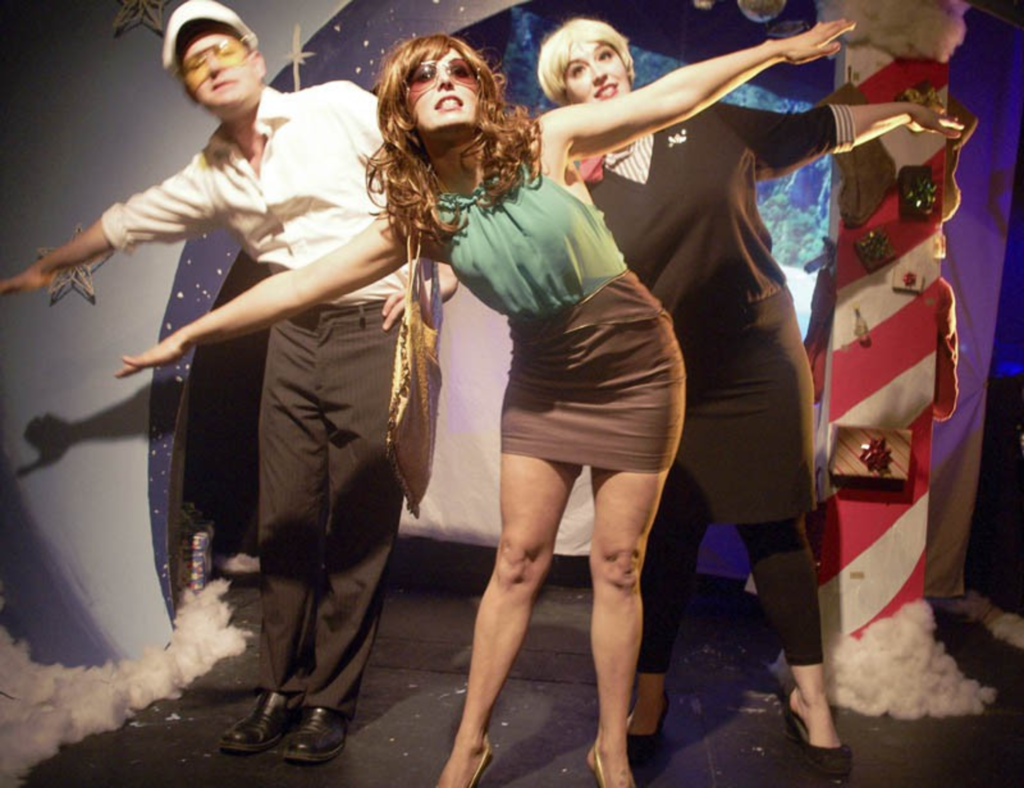 With A Very Joan Crawford Christmas at the Unicorn Theatre, the veteran entertainment team of Ron Megee and Jeff Church is serving up a giant glazed ham for the holidays.

The juicy target: Joan Crawford, a performer whose persona remains so camp that she needs no sendup. We encounter her at Christmastime at the very end of her career, about to embark on her final starring role (and wildly improbable career low point), the 1970 caveman horror epic Trog. Her only companions are longtime German maid Mamacita (Jessica Dressler) and aide-de-camp (pun entirely intended) Carl (Jeff Smith).

Die-hard devotees of Joan Crawford may already be familiar with much of the source material for Act 1, including Crawford’s outrageous quotes (almost up there with Diana Vreeland’s for wrongheaded enthusiasms and unmediated political incorrectness) and her rigorously non-feminist, 1971 lifestyle manual, My Way of Life, which details her slavish devotion to men and her own image, as well as homey advice on entertainment and beauty regimens. Her love of bacon (especially in rumaki form) and Pepsi well stung with 100-proof vodka is also documented.

This is all deliciously whacked, but somehow the bons mots often arrive deflated, the hilarity seeped out of them. Perhaps it’s the decorum with which they’re dispensed, within the device of a television special being filmed in Crawford’s New York City apartment. That decorum is shucked off before intermission, around the first time that Carl’s porter outfit is also shucked off and Joan injures herself in the throes of throttling a Christmas tree.

Act 2 thus finds Joan in a wheelchair — à la What Ever Happened to Baby Jane? — and a production that’s wilder and more surreal, with a taunting Baby Jane making appearances. Throughout, however, emphasis remains on the obvious suspects. From wire hangers to daughter Christina (author of the tell-all classic Mommy Dearest), the show suffers from an air of obligation.

With the monumental eyebrows and crimson grimace in place, and a set of legs any former showgirl would be proud to claim, Ron Megee bears an uncanny resemblance to late-era Joan, even without the constant mouth pulling. He swans around with leading-lady, regal bearing and melodramatic posturing, but shows himself equally adept at physical comedy, throwing himself into the role with a punishing series of pratfalls and collisions. It goes without saying that Megee is a genius impersonator, and his infinite variations of close-up-ready poses, double takes and twitches provide the majority of the show’s laughs. His protracted demonstration of masterful scrotal manipulation also deserves mention.

Smith is Megee and Church’s go-to hunk. The dramatic equivalent of the gorgeous secretary who can’t type, Smith wins me over with his obvious good will, especially given the exploitatively numerous times he’s called on to bare his body, which is every bit as square-jawed as his face. Carl’s frisky dance with Joan, who wears a skirt that redefines the word slit (just one of Jon Fulton Adams’ delightful costume concoctions), is a high point.

Dressler plays a revolving trio of supporting roles with energy but little chemistry. As Bette Davis playing Baby Jane, she reminds me more of the girl in the radiator in Eraserhead, which actually kind of suits the unintentionally grim undertone of this production.

There is no shortage of well-deserved love for Megee in this town — Joan Crawford sold out its opening weekend and has been extended an extra week, through January 2. Though I found the show lackluster the night I saw it, many in the audience responded to it with uproar. Those who didn’t seemed troubled, like me, as to why. Megee’s talents aside, this production’s brittleness goes beyond camp toward taxidermy.

Far livelier and more fun — my runaway winner, in fact, for best holiday show this season — is Fishtank’s White Nose Christmas, another three-person show about another vexing Hollywood star, this one contemporary. The thinly disguised tale of a child actor turned tabloid fodder, White Nose assembles a pastiche of headlines, music videos, A Christmas Carol, and paparazzi encounters. But thanks to the abundant wit and energy of its writer-performers — Heidi Van, Bess Wallerstein and David Wayne Reed — it’s as fresh and exhilarating as newly fallen snow (or a brand-new baggie of nose candy).

The story flies like a Friday night on Ecstasy, neither wallowing in excess nor pumping for laughs. The effervescent script is as crisp as this week’s issue of Us Weekly and as gratifyingly slanderous, with a heroine who has gotten into trouble so many times that, phoning for bail, she can give her location as “the jail by the great Mexican restaurant.”

Wallerstein’s Marilyn Monroe, portrayed with a touching mixture of melancholy and sparkle, plays fairy godmother to our wayward star. David Wayne Reed is dashing and winsome as a host of characters, from Little Sister to Snowy Cocaine itself. And Heidi Van makes decadence look delightful as the all-in-one-named Brindsay Kardilton.

Venus Starr’s costumes, Gregory Casparian’s lighting and Matt Weiss’ set are perfectly imperfect. This is a nimble, homespun little production, with the backstage changing area visible from around the crooked curtain, but it all absolutely works.

There were only five people in the audience on the dark, cold Sunday night that I attended, but the three cast members still gave their all, and I was reminded again that performance is a form of generosity.