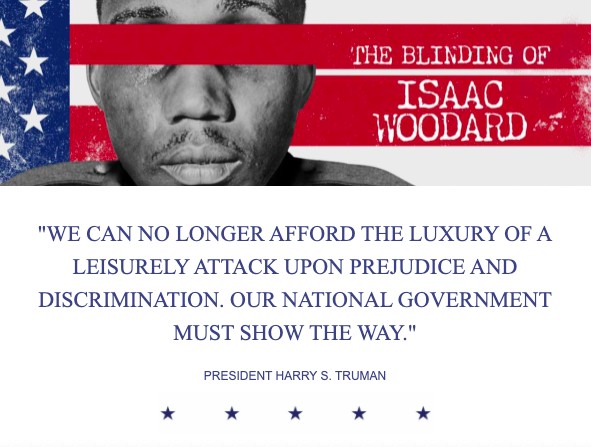 As part of its TRU Events series, The Truman Library Institute is hosting an event on racial justice in the time of President Truman. The online event, called The Blinding of Isaac Woodard, focuses on the 1946 event.

In 1946, a Black Army sergeant named Isaac Woodard was on his way home to South Carolina after serving in WWII. While on the way, he was pulled from the Greyhound Bus while still in uniform and savagely beat by the local chief of police. The incident left Woodard permanently blind and made national headlines.

“When a Mayor and a City Marshal can take a negro Sergeant off a bus in South Carolina, beat him up and put out one of his eyes, and nothing is done about it, something is radically wrong with the system,” Truman said about the event. “I can’t approve of such goings-on and am going to try to remedy it, and if that ends up in my failure to be reelected, that failure will be in a good cause.”

In the midst of the George Floyd murder trial, the library is hosting a preview screening of the PBS American Experience premiere of The Blinding of Isaac Woodward documentary. The preview will be followed by a panel discussion moderated by Michele Norris, a current columnist with The Washington Post. Jamila Ephron—co-writer, director, and producer of the documentary—and Kari Frederickson—a professor of history at The University of Alabama and a featured historian in the documentary—will be guests on the panel.

The online event is at 7 p.m. today, March 29. To register for free tickets, visit this link. Guests must register by 6 p.m. to attend the event.