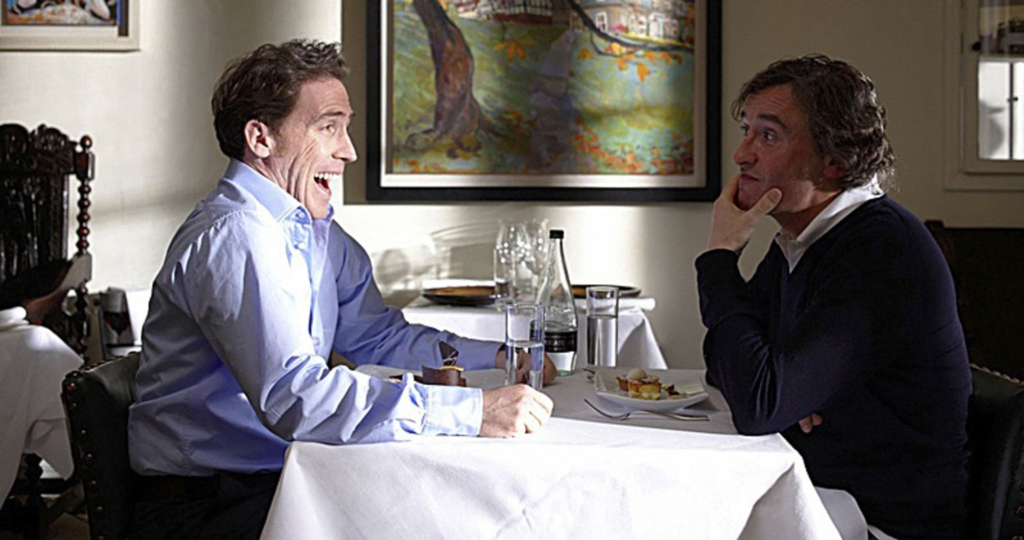 The Trip, an award-winning BBC comedy series starring Steve Coogan and directed by Michael Winterbottom, is now a partly improvised feature-length film. In both the film and series, the premise is the same: After his girlfriend abruptly leaves him, Coogan (as a fictional version of himself) invites his friend, the Welsh comic and impressionist Rob Brydon (also playing himself), to accompany him on a weeklong tour of fine restaurants in the north of England.

Reviewers have compared The Trip with the 2004 wine-country film Sideways, but The Trip is funnier, more spontaneous and less oppressively Paul Giamatti-laden. Coogan and Brydon combine the chemistry of an old married couple with an intimidating quickness of wit, indulging in dueling Michael Caine impressions, bursts of poetry and parodies of St. Crispin’s Day speechmaking. Their improvised quips and rejoinders grapple simultaneously with food and age, and the diminished expectations that accompany both. It’s funny banter that never sounds prefabricated.

Coogan is an actor known for immersing himself in characters, most famously the awkward television broadcaster Alan Partridge. Here, he inhabits a version of himself that’s arrested in immaturity while also in the midst of a middle-aged imperative for permanence. Unable to negotiate adult relationships, he sleeps with women 20 years younger. He feels dissatisfaction with the trajectory of his career, believing that his acting is underappreciated.

Winterbottom’s framing of northern England’s gorgeous terrain draws an unexpectedly moody, autumnal mist across the film’s thin plot. Beyond the village settings and rustic inns, the film’s visual appeal comes from the food. In quick shots, Winterbottom captures the preparation of dishes by actual employees of these real restaurants. Trendy, artful epicurism apparently now extends even into the hinterlands of English cuisine, historically distinguished by its reliance on internal organs.

The director’s casual relationship with the fourth wall, embodied here by the actors’ improvisational riffing on their own personas, echoes the more bombastic narrative disintegrations in his 24 Hour Party People, also made with Coogan. The effect in that film, an account of Manchester’s 1980s music scene, is immediacy. Winterbottom’s agenda here is to draw the
audience closer to the characters. Without a fully fictional character to hide behind, Coogan is more vulnerable than he has been in the past, but he’s no less funny or sharp for it. 