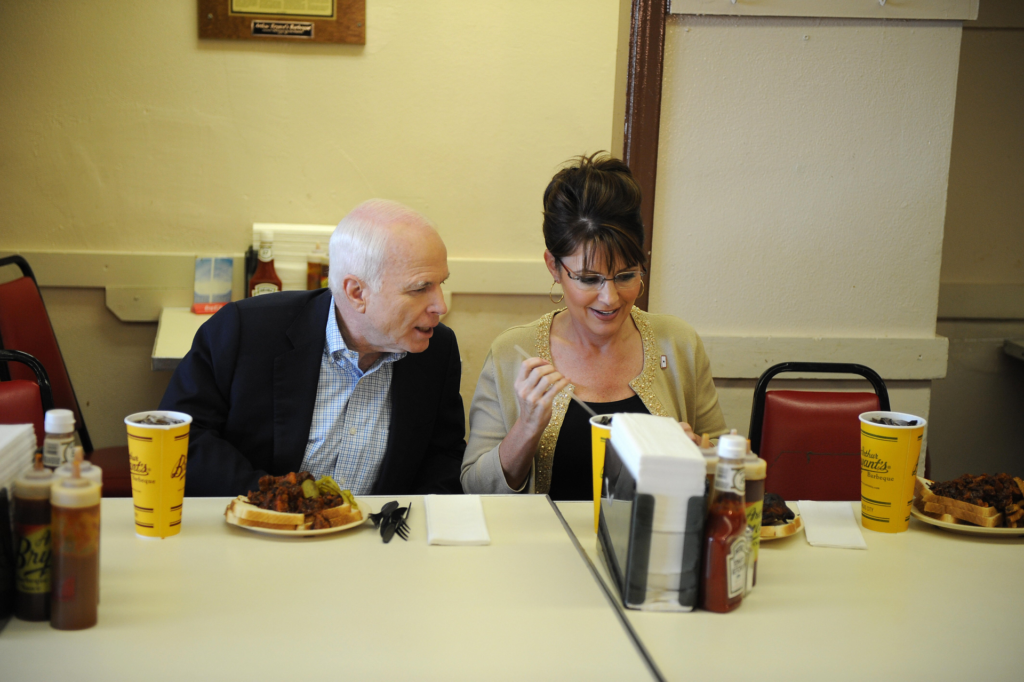 Sen. John McCain’s rally was scheduled for 11:30 a.m. inside the Pavilion at John Knox Village in Lee’s Summit. By 10:30, old folks had gathered on street corners within the sprawling apartment complex to watch for his motorcade. A standing-room-only crowd of nearly 3,000 filled the retirement community’s auditorium. An overflow crowd had gathered to listen on loudspeakers outside.

At least a thousand people stood in a cold drizzle. Maybe there were twice that many. It wasn’t the typical John Knox Village set, either. There were middle-agers, young moms with toddlers and strollers, teenagers and college kids, a pack of junior high kids in yellow T-shirts from a Seventh Day Adventist school and an occasional man in fatigues. One woman with long dark hair, wearing a long dark coat and bulky dark shoes, carried a homemade sign reading “Fast, Pray, Vote.”

One glasses-wearing blonde had her hair in an up-do like Palin’s. Vendors roamed the throng with cardboard racks of “NObama” buttons and manned tables and tents selling powder-pink McCain-Palin T-shirts. Kids climbed a tree to get a better view. Onlookers peered inside the media’s satellite trucks or called home for updates on how the whole scene looked on TV.

Inside the auditorium, big-name Missouri Republicans such as U.S. Rep. Kenny Hulshof, who is running for governor, warmed up the audience. Sen. Kit Bond tossed out a few L-bombs, trashing the liberal media and liberals Barack Obama and Joe Biden before — bizarrely — jumping on McCain’s change bandwagon.

Taking Bond seriously required working hard to suspend one’s disbelief. The McCain-Palin shtick disavows greedy earmarks. But Bond is a one-man pipeline through which Washington sends cash back to Missouri for roads, bridges, community centers, transportation efforts, anti-youth-violence programs, tornado shelters and countless other pet projects, keeping his constituents so flush that even Democrats love him. In its 2008 Congressional Pig Book, Citizens Against Government Waste ranked Bond ninth among senators, citing him for $309 million in pork projects. Yet here he was championing McCain and Pailn’s supposed reform agenda, as if he weren’t one of the biggest offenders.

It was just one in a continuous stream of surreal moments.

Periodically the crowd outside erupted into chants of “Sarah! Sarah! Sarah!” McCain’s motorcade pulled up alongside the Pavilion nearly on schedule, followed by the traveling press in white vans and, finally, the gleaming blue Straight Talk Express bus. Everyone lunged in that direction, cameras and cell phones raised above heads. Before going inside, the candidates spent a few minutes with the fans who’d been waiting in the cold mist. Palin tried to stay a respectful distance behind McCain, though the crowd was clearly going nuts for her instead of him. Feeling the love, Palin told them, “This is absolutely overwhelming! I wish we could all be together inside the facility, but seeing you out here is incredible!”

Turns out being a big celebrity isn’t such a bad thing after all. Unlike the McCain camp’s mockery of Obama’s rock-star status, no one here was complaining about Palin’s — and why would they? The Republican strategy seems to be: If it works for Obama, then steal it.

Now it was McCain touting himself as the change candidate, delivering a message for “the old big-spending, do-nothing, me-first, country-second Washington crowd: Change is coming!”

The crowd swallowed this whole, though a thinking person finds it hard to digest McCain’s argument for change when his biggest applause lines are the tired old Republican fiction that Democrats will raise taxes. Every day of this campaign, Obama says he will cut taxes for families making less than $250,000 a year — by all appearances, that would include most in the Lee’s Summit audience last week. Yet the Republicans keep bleating that Obama will raise taxes, repeating this lie with the sort of glee reserved for frat boys with pockets full of roofies.

For her part, Palin repeated the “I told Congress thanks but no thanks on that bridge to nowhere” line from her convention speech word for word, inflection for sneery inflection. Listening through the loudspeakers outside, a couple of women wearing flag shirts turned to each other. “It’s the same speech?” one asked. “Yep, it’s the same speech,” said the other. They seemed surprised to realize that a politician’s stump speech never changes, even when 40 million people have already seen it on national television. But this didn’t seem to bother them. Nor did it seem troubling that Palin was repeating this claim when, by then, it had been widely reported that even though Alaska didn’t build the $398 million bridge to an island with 50 people, Palin kept the earmarked money for other projects in Alaska. So much for rejecting earmarks.

Palin repeated that bridge-to-nowhere line in speeches across the country last week, though everyone knew the truth. Such blatant disingenuousness takes a profound belief in the American people’s gullibility. And the crowd at John Knox Village last week didn’t let her down.

Apparently, if you’re a cute, wisecracking governor and mom with a hot snowmobile racer for a husband, getting away with such brazen lies just means you’re feisty — and therefore qualified to stand up to Putin, Ahmadinejad and bin Laden.

After McCain finished his speech inside the Pavilion, the crowd waited in the damp outside, hoping for another glimpse. Women compared the images they’d captured on their digital cameras. “I got Todd,” one said, as if she were talking about Brad Pitt.

Obviously, not all of the Palin family is off limits. The Republican faithful hailed Sarah’s decision to keep her baby with Down syndrome and 17-year-old Bristol’s decision to have her own baby. It was unlikely that any of the fans in Lee’s Summit last week would dare acknowledge that they were applauding the Palin family’s actions as what they really were: choices. Choices that Sarah Palin would deny other women.

No matter, though — it was drizzling delusions last week outside the John Knox Pavilion. McCain slammed Obama for telling people what they wanted to hear and then promised, “You will always know where I stand.” But even that wasn’t true. Back in 2000, McCain called Christian conservatives “agents of intolerance.” Now he has selected one as his running mate.

McCain said he didn’t work for any party, but pandering to the religious right is exactly what Republicans have done throughout the Bush administration. It’s not exactly a maverick position. Nor is running a Rovian campaign of lies. It might be beneath McCain’s POW-earned honor, but it’s what Republicans do to get elected. And the cold, soggy congregation in Lee’s Summit’s fantasy land looked a lot like McCain’s margin of victory.