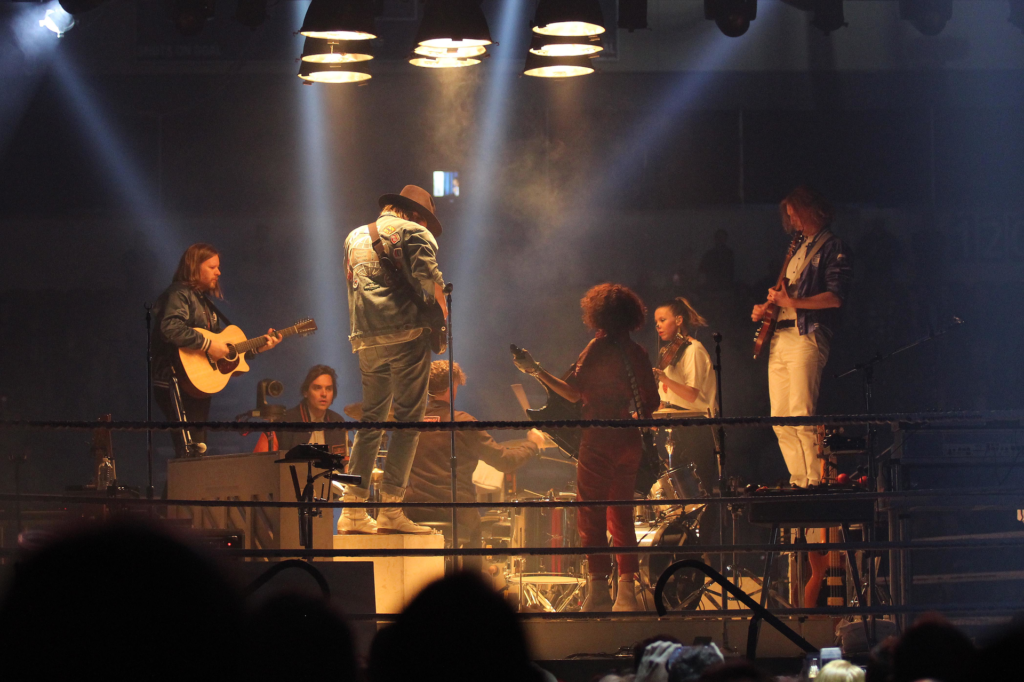 The choice of the Silverstein Eye Centers Arena for Arcade Fire’s stop on the Infinite Content tour seemed an odd one. Following the band’s previous two appearances at the perpetually wonderful Starlight, the far-flung Independence venue seemed bland, next door as it is to a Costco — decidedly suburban. Yet it turned out to be an ideal venue for an in-the-round stage setup that made the night feel intimate.

After a lengthy intro, which highlighted imagery from the band’s latest, the consumerist and social media–obsessed Everything Now, the band came out of one of the corners of the venue with an extended boxing intro, high-fiving fans as the musicians walked through the standing-only GA section that surrounded the stage. That square stage was hemmed in by boxing ropes and was positioned under a rectangular LCD screen showing live video. The lighting setup provided the additional advantage of being able to beam light directly down onto the band in a variety of configurations, from shimmering rings of color to direct beams that gave the appearance of structure. While the Reflektor Tour’s potential may have been more obvious for visual content, this is the band’s strongest tour visually — in part because of the setup but also because of the wonderfully close proximity of all audience members in the arena — the smallest of any on the band’s entire tour. 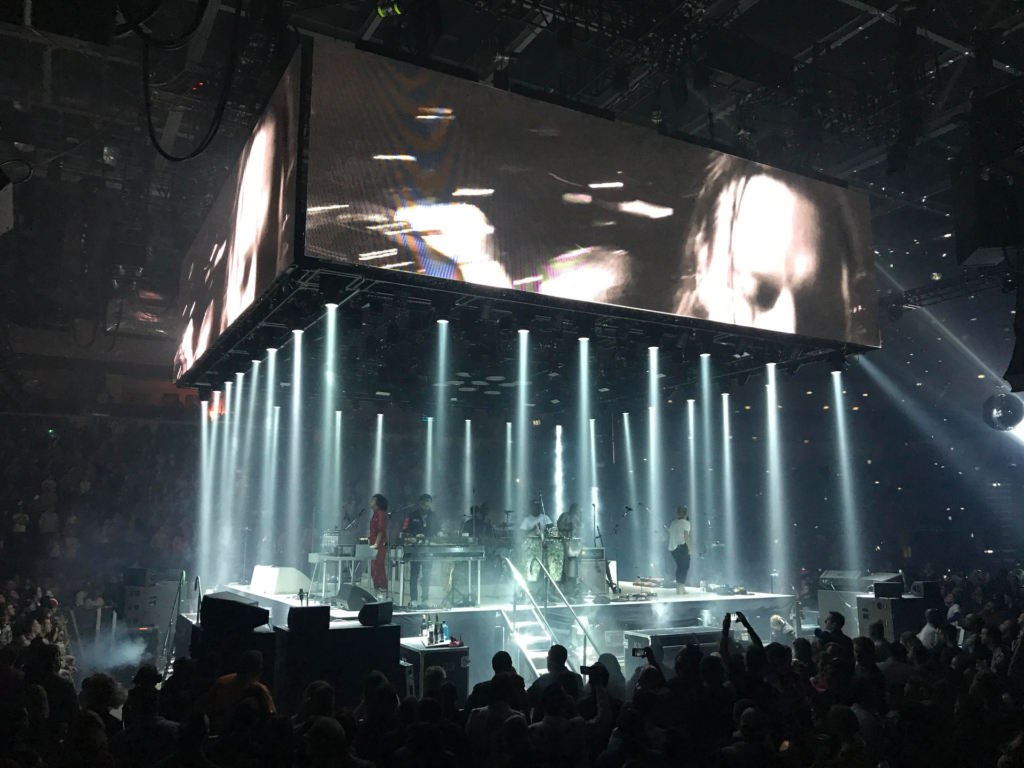 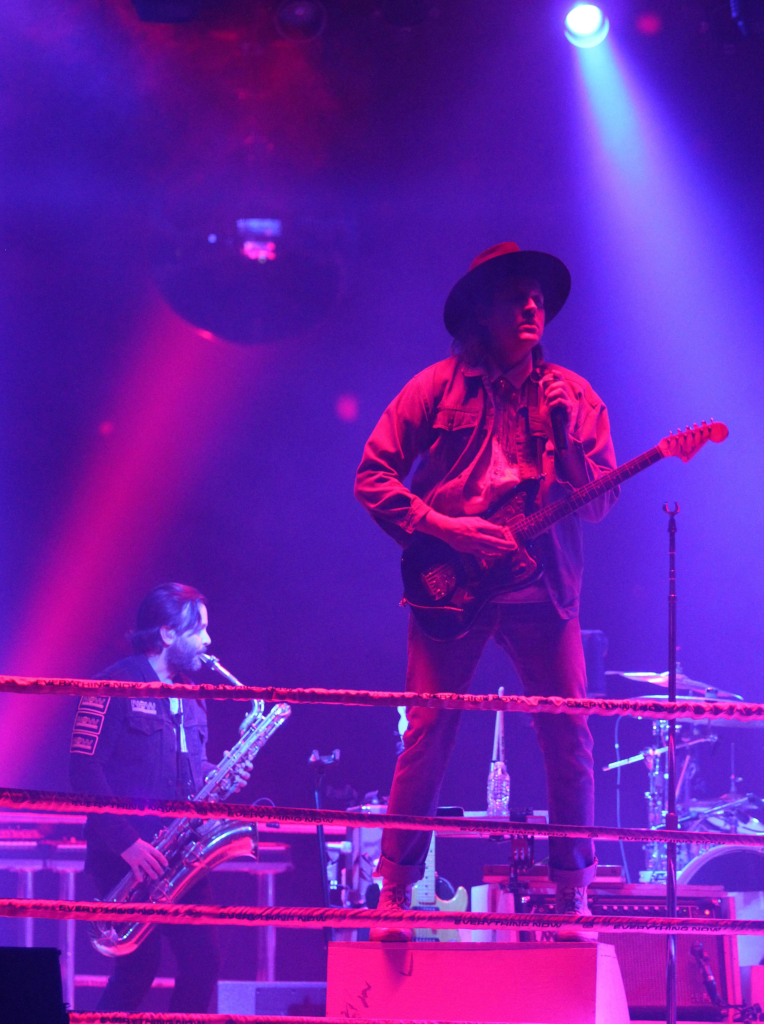 The show opened with the bouncy, Abba-drenched “Everything Now,” followed by the punchy “Signs of Life,” both new tracks. From that point the band’s setlist drew judiciously from all of its five albums. Among the strongest moments: the bouncing brassiness of “Keep the Car Running,” the ’80s-synth drone of “Electric Blue,” and the deep, burping saxophone of “Rococo,” a song which came out of a three-year retirement for the night. Less successful was the uninspired rendition of “Put Your Money on Me” and “Sprawl II (Mountains Beyond Mountains),” which lacked some of the satisfying snarl Regine Chassagne typically adds to the performance to transform pop song into anthem. 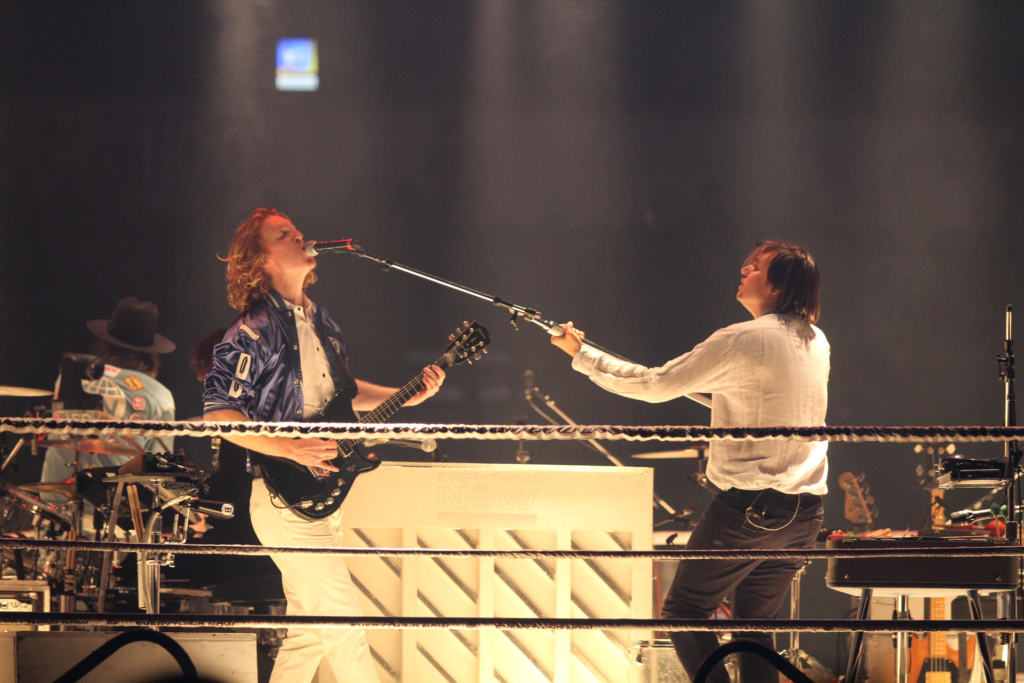 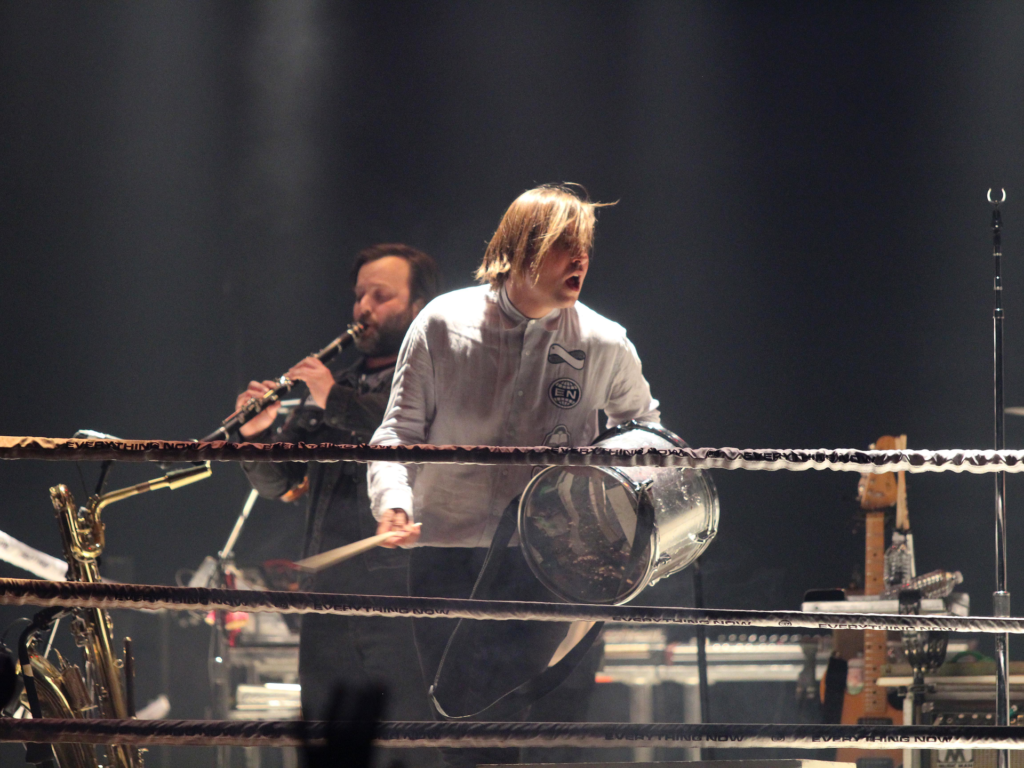 The weaker moments, however, were brief, and as the band moves forward in its second decade of performance, it still feels like the one of the world’s greatest and most high-energy live acts when you are in the room with them. Multi-instrumentalists Will Butler and Richard Reed Perry in particular exude joy, thrashing and throwing their bodies into even the band’s most well-worn material, making it feel as fresh as when Perry was poking holes in the ceiling of the Jackpot Lounge in Lawrence with his drumsticks just three weeks after the release of Funeral.

Somewhat surprisingly, the night was essentially devoid of politicking for a band whose politics lie apparent just beneath the surface. Win Butler referred to the Trump administration just once during the night, in his introduction to “No Cars Go,” when he paid tribute to “the great spirit of sometimes just ignoring how bad things can be.” Far more surprising, however, was his brother Will’s local connection, demonstrated through a comment that he had apparently spoken with Brookside lawyer Tom Pickert and Pickert’s wife, Emily, about local social causes in the days preceding his slaying this past week. Butler choked back tears as he explained that Pickert cared a lot about our city and the people in it, before dedicating the band’s performance of “The Suburbs” to Pickert and his family. 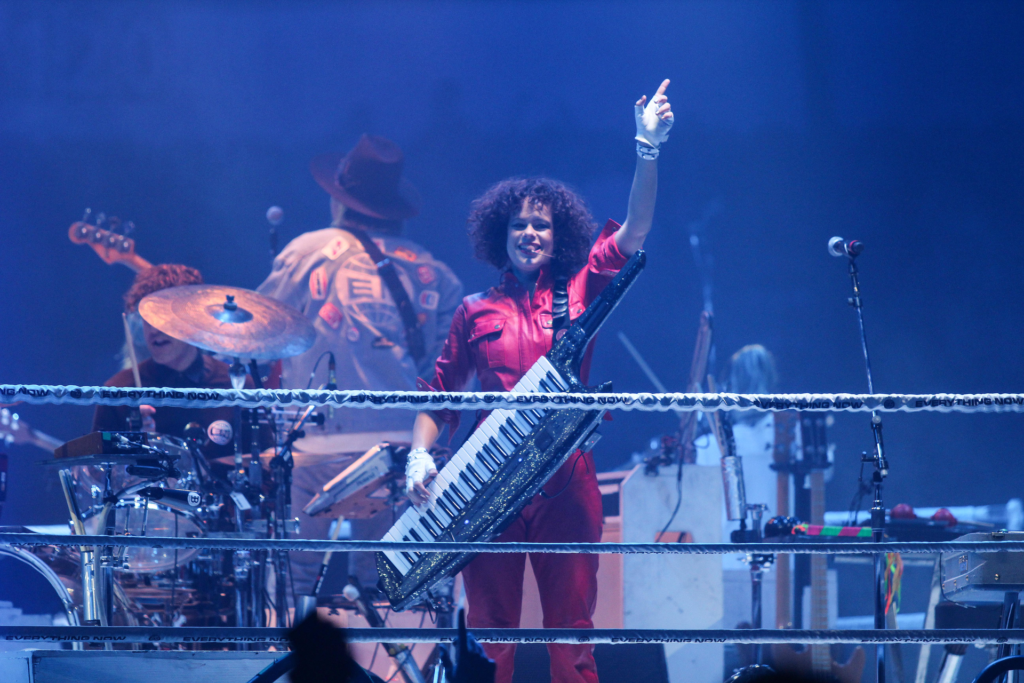 The end of the regular set was backloaded with some of the band’s most punchy material: “Reflektor,” a bruisingly bassy version of the new track “Creature Comfort,” and the driving “Neighborhood #3 (Power Out).” Both Win Butler and Chassagne waded deep into the crowd, Chassagne dancing with the audience and Butler moving up into the bowl as he sang. “Creature Comfort” solicited a particular snarl from Butler: God, make me famous / If you can’t, just make it painless.

The evening closed with a tinkling, light performance of “We Don’t Deserve Love,” followed by the band’s traditional closer, “Wake Up.” After a decade of performance, the song still — at least in the moment, if not later — provides a feeling of communal relief. Joined by the fun Colombian opener Bomba Estereo, the band pounded out the song’s seemingly arena-engineered beats. The chorus hung in the air long after, as the band did a sort of New Orleans–style performance parade, continuing to play percussion instruments as every player left the stage and headed out, back into the suburbs. 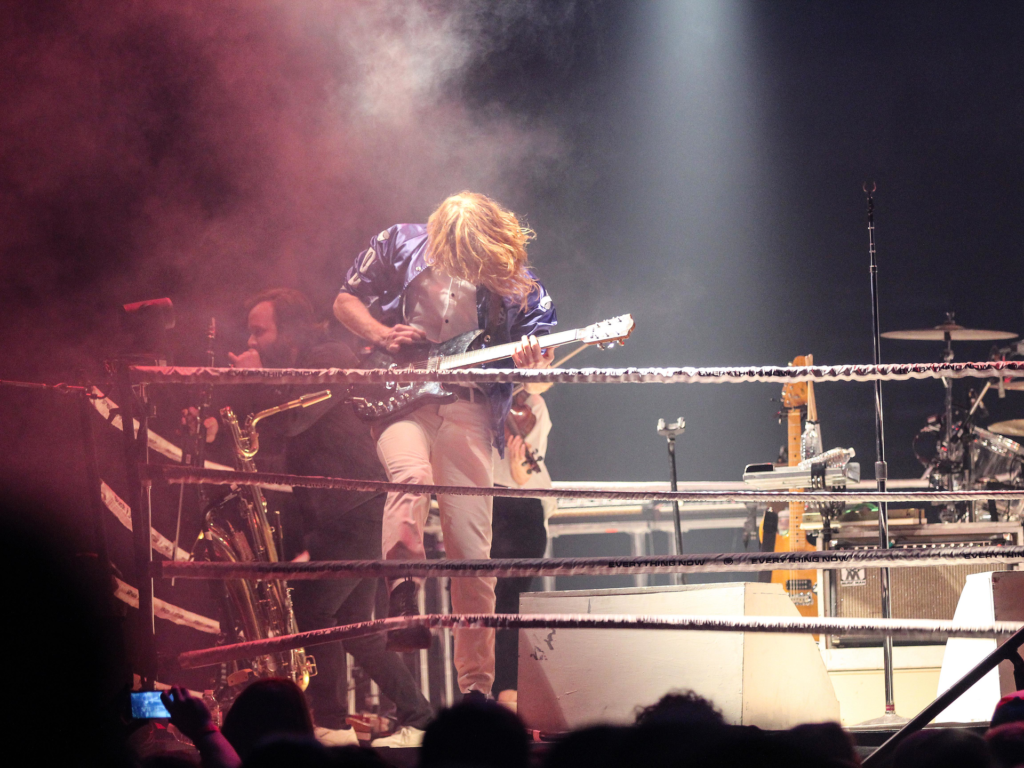 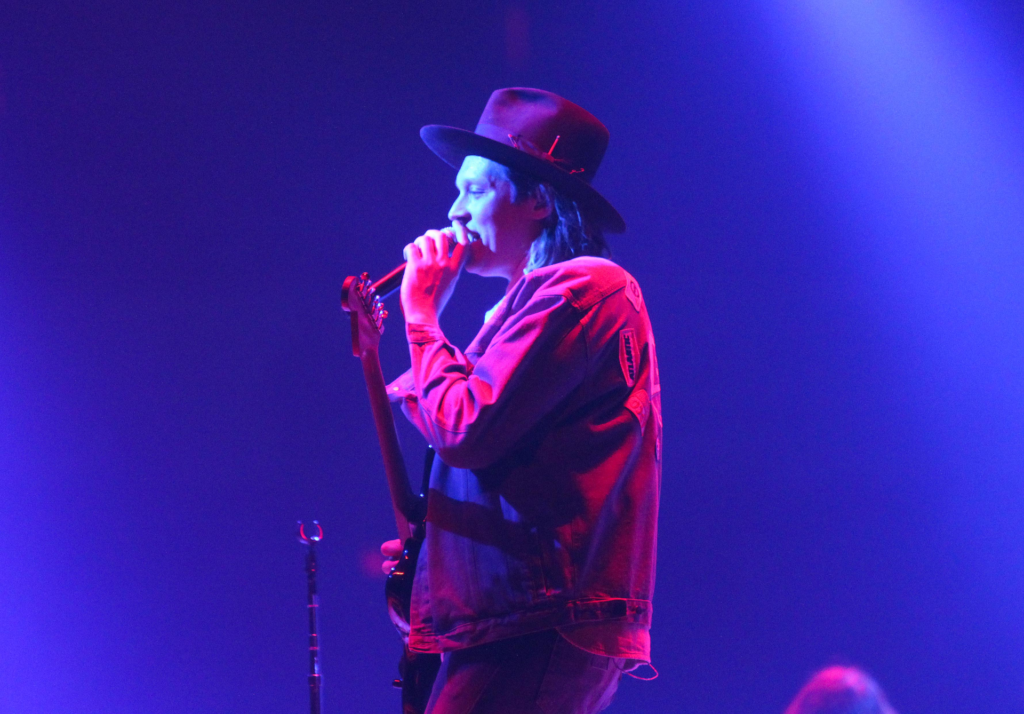 Put Your Money on Me