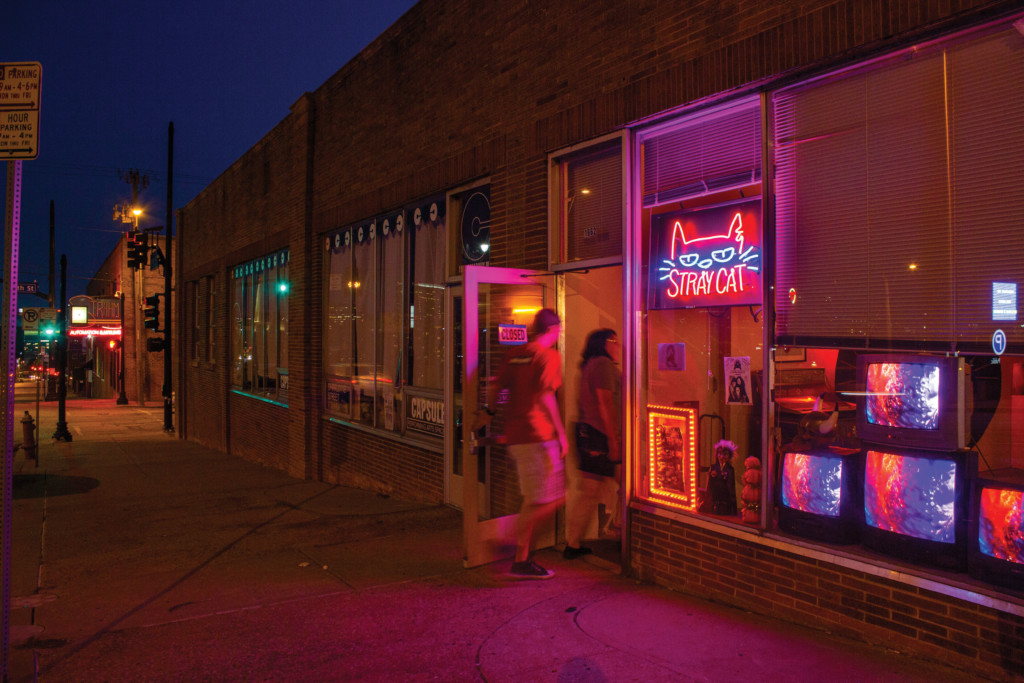 The friendly, local, niche nonprofit micro-cinema you need in your life. // Photo by Kelcie McKenney.

Our Best of Kansas City 2019 issue is out now. Go grab a copy. Alternatively, you can browse the results of the readers’ poll here. The issue also includes a list, compiled and written by The Pitch’s editorial staff, shouting out some of our current favorite things about KC. We’ll be publishing these items online throughout the month of October.

In a year when multiple arts spaces have shuttered or relocated, we’re looking for any excuse to remain optimistic about the scene. Stray Cat Film Center makes it easy. The nonprofit “neighborhood microcinema” (think: cozy, single-screen movie theater) has kept us occupied with a kaleidoscope of weird and challenging films, from contemporary German dramas (Hannah Arendt) to niche Soviet-era sci-fi (Aelita: Queen of Mars).

Sometimes, they’re Serious and Important Works. Often, they’re movies we can imagine being made into Mystery Science Theater 3000 episodes—though they’re funny enough without the riffs. No matter what’s playing, it’s a hell of a deal. Admission is $7. Popcorn is $2.

We’re also in love with the design of the 1662 Broadway space. In the front window, a neon sign of a disgruntled-looking cat glares out at the Kauffman Center across the street. The lobby is packed with artistic altars set up like scrappy still lifes. See: an enormous, three-dimensional cat face, heavy-lidded and leering. See: a tower of tube televisions stacked like cheerleaders. See: a gloriously toony pinball machine called “Mousin’ Around!”

Stray Cat was founded by UMKC professor and artist Caitlin Horsmon, writer and artist Jori Sackin, and weird film buffs Jaclyn Danger and Matthew Lloyd, who have been programming screenings as the “Cannonball Roarers” since 2014. We’ve been following the Cannonball Roarers for a while. In 2016, we gave their Psychotronic Film Series an award for “Best WTF Movie Series.” And Stray Cat has continued that series with Italian giallo films (gore-festooned thrillers full of soapy women getting stabbed in the shower).

But there’s truly something for every film lover on the docket. Queer theory geeks have “I’m Here, I’m Queer, I Wanna Watch Movies,” a film series hosted by local artist Boi Boy. Wordsmiths have Sackin’s freewheeling series “Metaphors in Cinema.” The latter introduced us to the Hong Kong movie The Cat, in which a cute black cat from outer space teams up with a mystery novelist to murder aliens, break a metric ton of sugar glass, and perform some sweet kung fu. The cat is named “The General.” He suplexes a junkyard dog.

The company’s core members have expanded over the past year, as have its offerings. Now, community members are invited to submit their own proposals for Stray Cat programming. There are a few rules—“we’re not going to show Independence Day,” Sackin says—but the founders are committed to letting independent film lovers come together and have a stake in the programming. No future’s guaranteed in this town, especially where art and real estate are concerned. The Stray Cat crew were the 2018–19 recipients of the Charlotte Street Foundation’s pilot StartUp Residency program, and they’ll age out of their rent-free agreement soon. They aren’t certain whether they’ll be able to hold on to the Broadway address. “We’d like to stay,” says Sackin. The good news is, you can support the center now. It’s here, it’s weird, it’s a hell of a good time. Go watch some movies.

Stray Cat Film Center has a packed calendar. Check it out here.