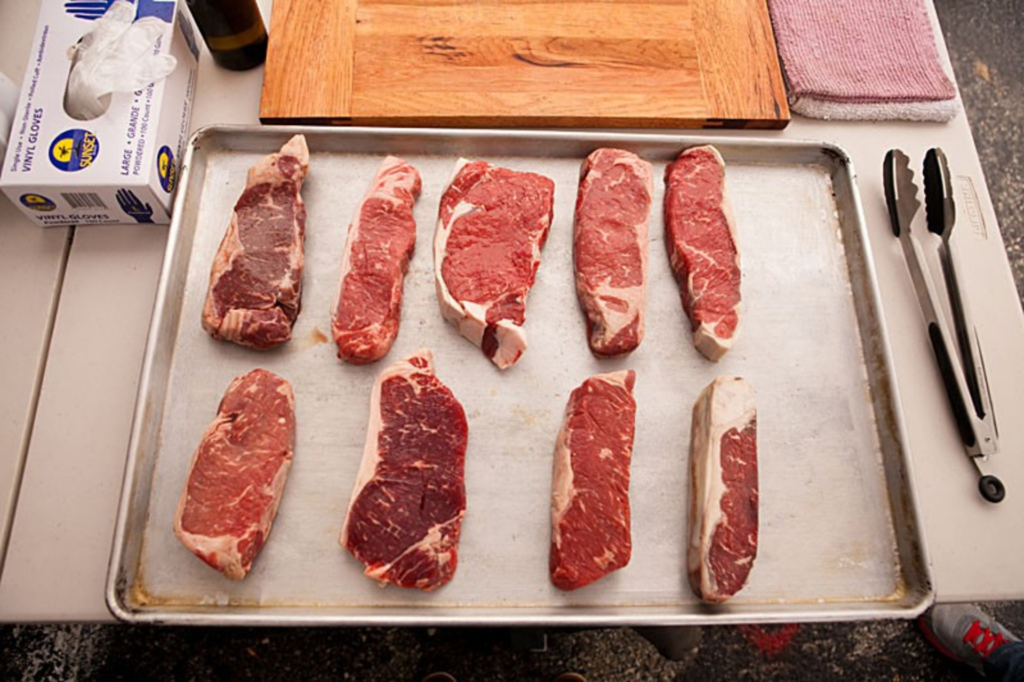 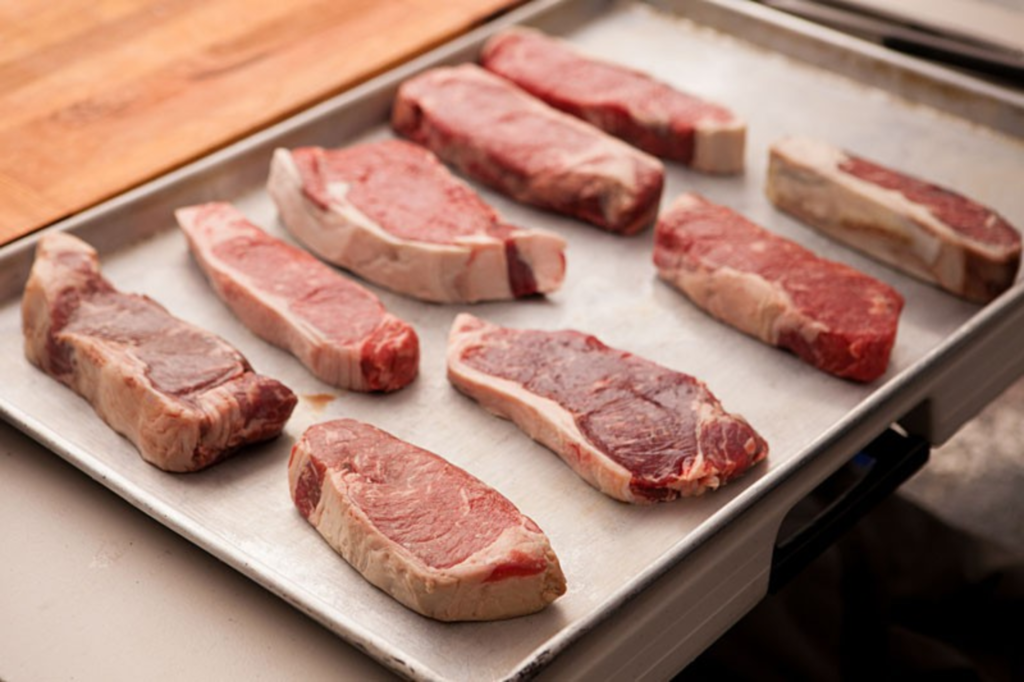 “Look, I think there’s been a mistake.”

“Did you say steak?”

There has been no mistake. You’re reading the Steak Issue because turkey is just an appetizer in Kansas City. So get excited. We put a panel of Kansas Citians through a gauntlet of strips, grilling more than 8 pounds of cattle in search of the one chunk of local beef you’ll want on your grill at your next cookout.

The rules were simple: nothing directly from a ranch or an operation that ships solely to your door. The chosen steaks are available at least six days a week at a butcher counter or in a case within a 20-minute drive of Kansas City. Ready the A-1 and a steak knife. This is happening.

Can you guys give me a minute by myself?” chef Craig Adcock asks jokingly as he gently massages a strip steak on a baking pan.

On a rainy Tuesday morning in November, Adcock has begun working on nine hunks of meat, sprinkling them with salt and olive oil. Adcock, the owner of Belly Up BBQ and Jude’s Rum Cakes, is playing grill master for the eight hungry men assembled for this communion with the cow.

I bought the nine steaks in the last 24 hours from eight shops: Dodge City Beef, Broadway Butcher Shop, the Local Pig, Bichelmeyer Meats, Anton’s Taproom and Restaurant, the Store, Price Chopper and McGonigle’s. I chose the strip because every butcher stocks it, and every home griller is willing to tackle it. As one butcher told me, “When people ask for steak, they’re asking for a strip.”

“Steak is what is unique about the Midwest,” says Todd Graves, a lawyer, cattle rancher and founder of the American Royal Steak Competition, which was held for the second time this past October (and loosely inspired this tasting). “It’s the most popular protein and what Kansas City is known for. This is the Napa Valley of steak.”

“I’m on Atkins,” Nevins says, looking at the steaks. “This is perfect.”

The strips range in size from 8 to 10 ounces (the Local Pig’s is the only outlier, weighing in at 17 ounces). The night before, I defrosted the Dodge City steak, the only frozen entrant, in my refrigerator. Each strip is slightly chilly to the touch when I remove them from a cooler and place them on a baking sheet. That’s why Adcock is massaging them: to bring up the temperature a bit.

I’m the only one who knows the origin of the beef when Adcock places the steaks on a Santa Maria–style grill in the parking lot behind his Lenexa commissary kitchen. Adcock has filled the black grill’s open pit with Royal Oak hardwood lump charcoal and peach wood. He raises and lowers the grate with a side crank, decreasing and increasing the heat. In the hot zones, the grill can reach 650–700 degrees Fahrenheit.

“It lets me get a good sear,” Adcock says. “And it’s the most primal.”

After about 20 minutes, the steaks are ready. The jury convenes around a pair of 1950s formica kitchen tables. Adcock, who regularly hosts private dinners here, slices the steaks into roughly 1-ounce portions. Each juror is asked to individually consider the merits of each piece, scoring from one to 10 (from lowest to highest) on appearance, taste and tenderness. The tasters are to write their scores without initial discussion in order to avoid groupthink.

Adcock places the steaks on a cutting board in the same order that they graced the baking pan before the grilling. The first to be cut is from Dodge City Beef. The conversation stops as plates circulate around the table like a proper Thanksgiving dinner.

“It was right down the middle,” Albers says later of Dodge City’s steak.

“It was really thin, but it had good flavor,” Kendall says. The other tasters concur. Broadway scores highest in the taste category, nearly a full point above the average.

Next up is the Local Pig steak, which bears a passing resemblance to the shape of Kansas, according to one taster. The strip, coincidentally, came from a Kansas farm.

The fourth strip, from Bichelmeyer’s, has an attractive crust and is deemed the second-best-looking steak of the bunch. The fifth is a grass-fed strip from Anton’s.

“Ooh, if it looks this good,” Matz says of the Anton’s steak, trailing off. “I remember thinking, This is going to be good, man.”

The cows from the other butcher shops are all grass-fed and grain-finished. (Price Chopper did not return a call about its meat.)

“This one grew on me,” Nevins says of the Store’s steak. “It definitely had a lighter flavor that wasn’t overpowering but good.”

The meat love ends with steak No. 7, Price Chopper’s strip, the only shrink-wrapped steak in the bunch. (Dodge City’s was vacuum-sealed.) The grocery-store chain’s strip is thin with a bit of a grayish pallor.

“It was livery and grainy to the touch and a bit bland,” Graves says.

Price Chopper’s steak earns the lowest scores in taste and appearance. But the next steak, from McGonigle’s, gets a warm reception. Hudnall later suggests that it may have been due to the last point of comparison. “I possibly liked it because I didn’t like the one before,” he says.

“I wanted to eat that steak and then was happy I did,” Albers says.

Several of the steak eaters concur.

Steak No. 9 is a wild card: a dry-aged strip from Anton’s (the only dry-aged entrant). It is also a thicker cut, more than an inch thick, with a massive fat cap in the shape of a mallard head.

“That fat cap looks like the steaks I used to eat as a kid,” Adcock says.

After discussing the merits of each steak, I ask the judges to pick the one strip they’d choose if they were cooking for themselves. Anton’s and the Store each receive a vote. Broadway Butcher Shop garners two votes. The clear favorite is McGonigle’s, which earns four votes from the judges.

Here’s the breakdown: McGonigle’s earned top marks in appearance. Broadway Butcher Shop ranked highest for taste. The judges called Anton’s grass-fed steak the most tender. Price Chopper ranked lowest in taste and appearance, while Bichelmeyer’s and the Anton’s dry-aged entry tied at the bottom for tenderness.

When it comes to steak, sometimes it pays to follow the herd.