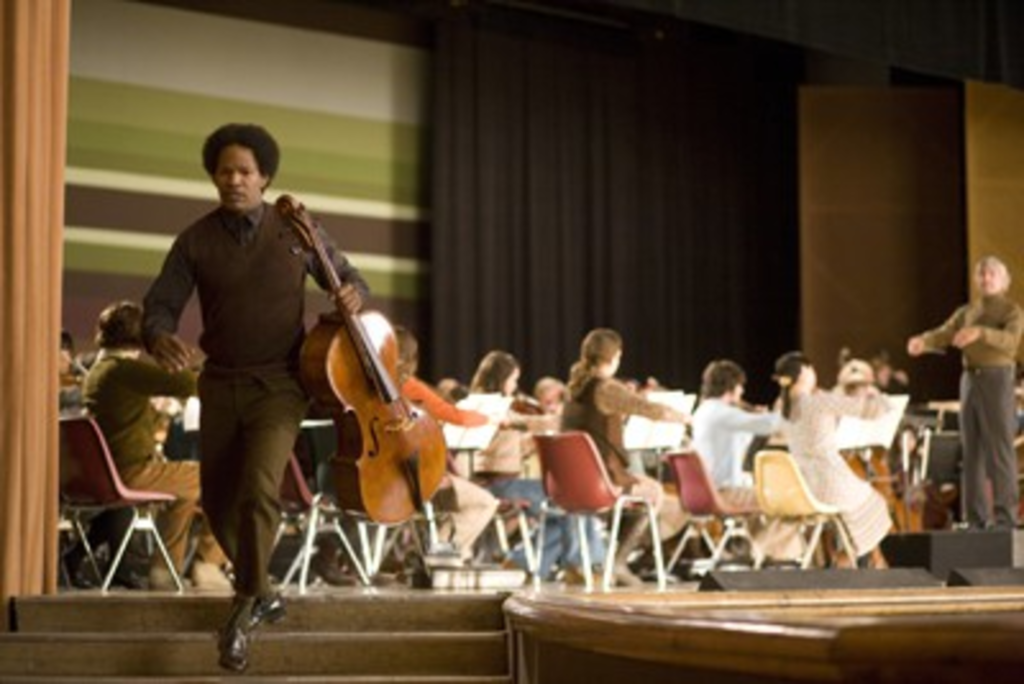 The Soloist opens with newspapers thudding onto lawns, a quaint sight that makes the movie practically a period piece, even though the events that inspired it took place within the last four years. The movie turns on a series of columns that began in 2005 by Los Angeles Times reporter Steve Lopez. An old-school vox populi whose writings about his friendship with a musically gifted, homeless black man on the city’s Skid Row drew an outpouring of sympathy and support from readers around the nation. Someone even sent a cello. And if the delivery of the instrument to a newsroom full of gaping journos isn’t worth a grandstanding tracking shot, I don’t know what is.

On the face of it, British director Joe Wright, who brought us the ghosts of upper-crust England past with Pride & Prejudice and Atonement, seems an odd choice. But Wright, like Lopez, has a common touch, though the director is more vulgarizer than populist — a crucial difference when the subject is the wretched of the earth. Using local nonprofessional actors, Wright pumps up Lopez’s laconically described Skid Row into a Ken Russell hellhole of social outcasts and misfits.

The Soloist begins with a flashy aerial shot of the downtown intersection between four freeways, followed by a meaningful cut to the dingy underpass below, where Nathaniel Ayers (Jamie Foxx) lives with a shopping cart full of rubbish that he loves as much as the two-stringed old violin he plays to drown out the hostile voices in his head.

That’s where Steve Lopez (Robert Downey Jr.) stumbles across him playing Beethoven and where he proposes following Ayers around. For journalists such as Lopez, it’s a short hop from news coverage to social work. Before long, under the eye-rolling gaze of wised-up community organizers, he’s trying to press on Ayers medication, music lessons, an apartment, and an appearance at Walt Disney Concert Hall. Guess who’s due for a steep learning curve?

Writing with matter-of-fact warmth and appealing self-deprecation about his efforts to fix an increasingly agitated Ayers, Lopez skillfully weaves in complex issues of patients’ rights, the relationship between art and psychosis, and the thin line between journalism and advocacy.

Wright, apparently seized with the fear that the material lacks inherent drama, lays on the hyperbole, peppering the action with in-your-face visuals and ill-lit flashbacks to Ayers’ youth as a troubled Juilliard prodigy who freaked out his loving family. Instead of bumping into Ayers, as Lopez did while walking down a street, the writer meets him after being toppled from his bike and landing with a face full of blood in the county hospital’s emergency room. To lighten things up, the writer has several labored run-ins with urine.

Worse yet, Lopez has been given a personality makeover. Whether in the interests of pathological symmetry or because this is how movies portray journalists, screenwriter Susannah Grant has turned the happily married Lopez into the ghost of Robert Downey Jr. past — a barely socialized basket case, divorced from the sardonic but supportive wife and boss (Catherine Keener), who watches him succumb to his own delusions and then dusts him off and sets him straight.

Stalwartly resisting the overkill, Downey delivers his lines and his unnecessary voiceover in a flat mumble that’s astutely complemented by Foxx’s low-key prattling. By turning down the volume, Foxx’s beautifully modulated performance catches the way people with psychotic illnesses slip in and out of rationality and self-awareness. His Ayers is a sweet, self-effacing man, gifted but no genius, with a terrible illness he keeps at bay — up to a point — by replacing the menacing voices in his head with music. Ayers understands, more clearly than his would-be savior does, that he lives on the streets because that’s where he has nothing to lose, and it’s where he has none of the pressures that drive him to violence when he’s pushed too far.

Foxx and Downey’s disciplined duet comes close to redeeming The Soloist from its visual excesses and the woolly romanticism about mental illness that Lopez so nimbly sidestepped. Never one to resist a cheesy finale, though, Wright leaves us with a parting shot of the dancing homeless that shamelessly exploits the very people his film is meant to champion.