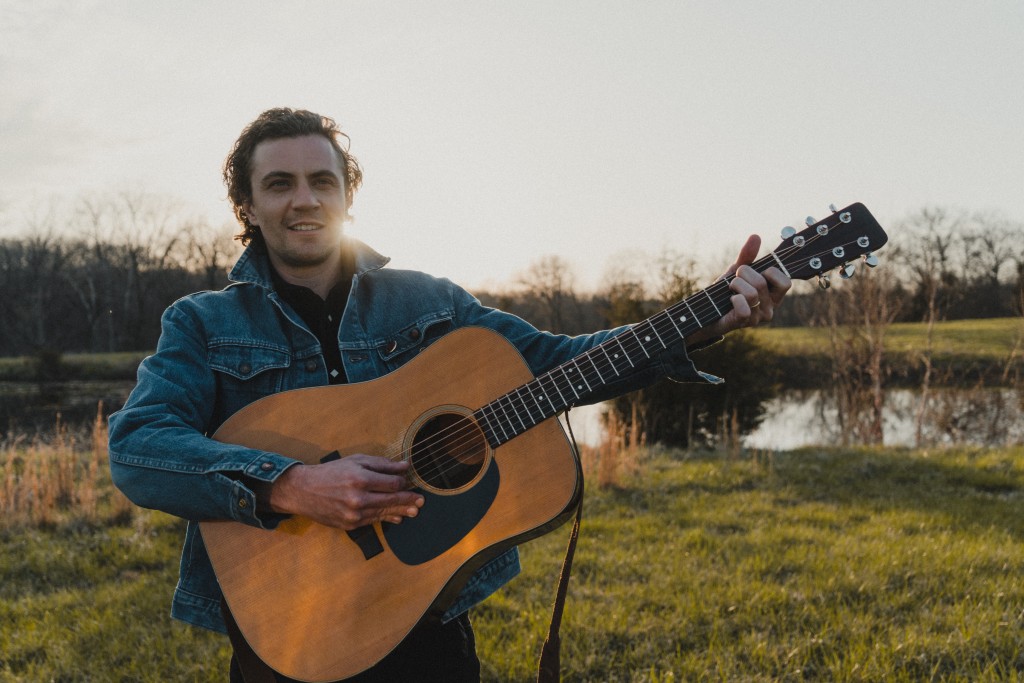 Roots musician Forrest McCurren knows how to keep things local. He and his wife, Margaret, are in the process of rehabbing a house on the land near Fulton where his grandfather still lives. The first two videos from his debut album, Oh Me, Oh My—“Little Rock” and the title track—were shot in Tonganoxie and Lexington, respectively, and he’s speaking with me via Zoom from the Kansas City library’s downtown branch. It’s a whole collection of things which leads us deep into a discussion of roots and paths ahead of Oh Me, Oh My‘s release this Friday, August 19.

The Pitch: What led you back to Fulton?

Forrest McCurren: We’re in a very transitional summer right now. We’re redoing a little place on my papaw’s farm–that’s Big Forrest. It’s little. I mean, it looks like a double wide from the outside. It’s more settled than the double wide.

It was built in the ’50s by an old bachelor in Callaway County, Mr. McClannahan. So we call it the McClannahan place. My grandpa’s been renting that out and the last renter, I don’t think he’d been in the house without a cigarette lit for a whole nine years.

I’m not opposed to little tobacco usage every now and again. Smoke ’em if you got ’em–we play bars were we can smoke inside and those are always fun places, but as far as the old home place, we decided that we’d take the time to rip up the carpet and repaint the walls.

We’ve been in Kansas City for the past few years, Margaret and me, and so we’re trying to make that switch, but we’ve been playing out-of-state a lot this summer. It’s been little scoops at the time. You try to use a big shovel, but it takes up a little bit of dirt.

That’s a lot to do, besides getting ready for your album release.

Yeah, and we’re learning it all the fly, man. One of my favorite movie lines is Cool Hand Luke, where Paul Newman says, “I never made a plan in my life,” but I’m having to re-rethink that mentality. We’re rolling with it and going on the fly a lot of the time, but thankful to be busy as we are.

Well, it’s not totally without plans. You’ve shot two really gorgeous music videos for the release of this album.

Thanks, man, you’d be surprised how little planning that was. Yeah. Thank you for saying that. Brett Jackson and Aaron Lawrence of Intrepid Creative–thanks to those guys.

What’s great about “Little Rock” is it fits in with moving back to Fulton because it’s obviously shot in the middle of Missouri.

That was a road trip. That was basically a road trip. Our first stop was Bates City off of I-70, at the fireworks stand there, then we kind of chased the river to Lexington. The truck? That’s actually our fields behind the house that we’re remodeling. We chased what our transitioning summer lookED like.

We don’t want to pigeonhole you as “small town,” but it feels like you do have that feeling of a small town while not being “country.”

That feels really, really good to hear ’cause like [Kris] Kristofferson said, “If it sounds like a country song, that’s what it is.” You know, my heroes are all over the board and I think the writing and the subject matter – I just try to be human with it and I try to get not too microscopic, but for me, my brain kind of works kinda like a border collie. I feel like a lot of the time, I’m just looking all over the place. I don’t sit down very well. It’s something I’m working on. You learn that when you live with somebody – like, “Jesus, stop moving!”

For me, writing is a chance to zero in and kind of distill the people I meet and the friends I know and it does come out with these kinds of characters I feel like people see from small-town America. Musically, I can only do what I do on acoustic: a lot of finger picking and some rhythm. The setting of those places sometimes callss for steel. I don’t know. More than anything, I’ve been calling it a driving album. I think it’s an album that is very conducive to being on the move. 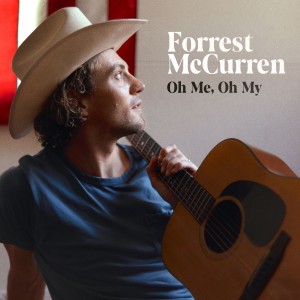 “A driving album” is a really good way of putting it. It does feel like listening to the radio while having someone tell you a story at the same time.

Damn. Thank you, Nick. That feels good. We’ve been in KC, and maybe I think that’s been a part of it – like, I am very nostalgic. A sense of place is really important to me. I wrote these songs while being away from mid-Missouri. I was a homesick kid growing up. I couldn’t spend the night anywhere. My dad always expected a call about 1:00am.

I think [Oh Me, Oh My] was my way to deal with being away from it all. I mean, we’re just right down the road on, and I love that I-70 stretch, but I think it was a way for me to bring myself home and understand what it meant to look back on that place.

What’s been really interesting is life imitating art. We recorded this right before the pandemic in Oklahoma. We had no plans of moving at that time, but there was a lot of sense of it. “Oh Me, Oh My” has a verse that says “I can’t wait to leave the city and the mess I’ve made/ It’s not far from where I come, but it feels like outer space.”

That came out fast and I didn’t think about it too much and then this summer, it was like, “Oh shit, we are gonna leave the city,” and it just made sense. My grandpa’s 92 and he still working every day, so it’s a really special time to get to be around him and just be right down the gravel road. It feels right to go. I mean, we love KC, but then we’ll also be right off of I-70, and we’ll be able to hit the road as much as we want, hopefully. It makes sense, but it’s been kind of interesting how everything is reflecting each other, like a mirror.

It seems as though every folk, country, or Americana artist’s travel schedule takes them to far-reaching places which are also the most beautiful places in the country. Places like Colorado or Wyoming definitely love their roots, to the point where we see Instagram posts from musicians, and it’s like, “We wanna be where you are right now. We wanna be in big sky country.”

Hell, yeah. Turns out that the Iowa Mississippi River valley is beautiful in the spring. That’s been a really neat part of it. We’ll go – Margaret and I – and it’s a wonderful thing to be able to do with my partner. She’s my best friend. And she’s also a much better musician than me, and knows that sleep’s important, and you have to remember to eat. We’ll go anywhere to play and being able to do it together has been really special.

I remember, we were playing a place in southern Missouri. This was probably a year ago. It was rough. It was a great American Saturday night and people wanted to fight or fuck. We’re loading in, and I walk kind of funny and talk kind of funny and I remember this real rough guy, just chain-smoking cigs, who stared me down the whole first set.

I went for a beer after the set and he didn’t have to say my name. He just gave me a glare and then gave me the finger to come over–not the finger, but a pointer finger [curls finger in a “c’mere” gesture]–and so I came over. He says, “Those are some good, down-to-earth songs.” I was like, “This might be the first compliment you’ve given in 10 years,” but that’s been cool to take the tunes to another town. I think you have to, to see what connects. 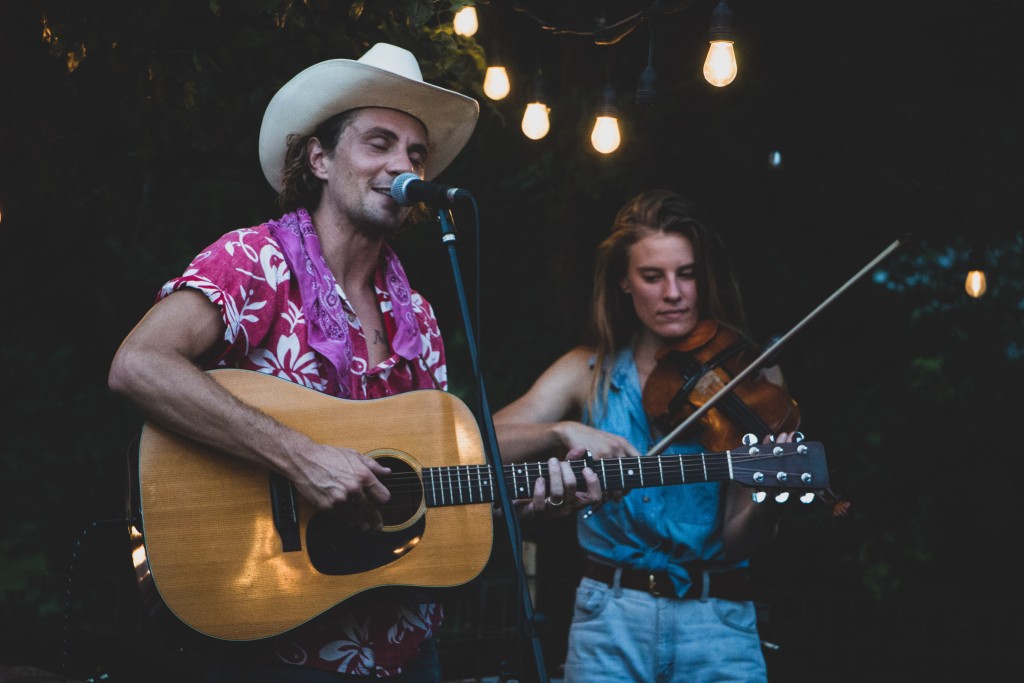 What’s it like for you, to have the experience of putting out your debut album at this point?

You mean as the country’s in turmoil and people feel the last two years on their shoulders? Are you talking about the environment?

The environment is just waiting until you’re in your early 30s to do it.

I was born in ’90. Where I’m from, there was always music. My grandma played organ at church. Some of my first memories are watching her play Hammond organ on Sundays. And I still love that music. I think “Amazing Grace” is probably the best-written song ever, along with “Will the Circle Be Unbroken” and “Just a Closer Walk With Me.”

My daddy used to sing songs to me to go to bed. He’d sing old soul songs like “Stand by Me,” and my mom listened exclusively to Willie Nelson, but like I only played sports. That was what I did growing up, and sports was king and I come from a good sports family and so that’s what I did until I graduated school at 23.

My brother gave me a guitar and he was listening to some great tunes from guys that I still love – Dylan of course, Springsteen, Justin Towns Earle. I saw Dawes, the rock and roll band from California, when they were touring that North Hills album at the Blue Note. That was my first album. I was probably 20 and that was the first time I’d been to a rock and roll show. I remember falling in love with just watching folks do their thing and do it well.

I’ve always been word-centric and loved to write and just listen to those tunes and be transported. Getting a guitar in college–I was still playing soccer up at William Jewel, so that kept me busy, but I felt like it’s been a really special thing for me. I feel very lucky because, after college, I started working here and there, trying to figure out how to be an adult. Being able to lean back on music and really dive into it and have those evenings to write songs and write songs on the jobs that I was supposed to be doing–I was probably a bad worker for a little while because I was really just trying to listen to music and think about words. Unless it’s mowing grass, I’m still probably not a great worker, but it’s been really special.

Forrest McCurren’s Oh Me, Oh My is out Friday, August 19. Details on how to pre-save it are at the artist’s website.