The Sexy Accident gets some lady in the lineup 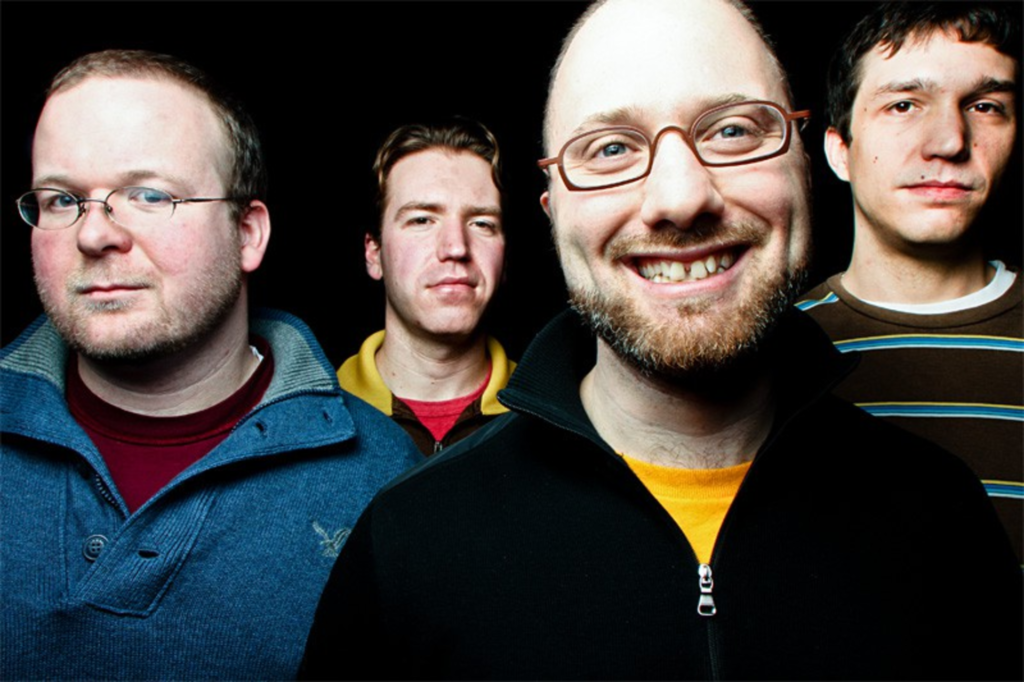 Rehearsing with your new band for the first time? Bring cookies.

This is Camry Ivory‘s tactic when she arrives at her first practice (and, incidentally, first Pitch interview) with the Sexy Accident. On a recent Tuesday evening, she shyly carries a keyboard and a container of crumbly chocolate-chip bites into the warm Westport house where she auditioned for band leader Jesse Kates the week before. Ivory isn’t vegan, but the cookies are — “because you never know.”

No one else is vegan, either, but drummer Daniel Torrence, guitarist Chad Toney and bassist Jonathon Smith like the snacks. After munching, everyone crams into the living room to practice for a show at Prospero’s Books the following weekend.

Ivory, a petite twentysomething with long-held musical ambitions, found her bearded bandmates through a Craigs­-­list ad.

Under different circumstances, she might have discovered the Sexy Accident through The Onion. On December 11, the site’s AV Club posted “2009: The Year in Band Names,” a list of the most “funny, stupid and confusing” band names. Right there in the sex category, between Sexual Disaster Quartet and Blownload (with its hit “Keep Sex Evil”), is the Sexy Accident.

“It was retarded,” Kates says, beaming, “but it’s probably one of the greatest honors I’ve ever received.”

An enthusiastic guy with a gap-toothed grin, Kates moved to Kansas City about eight years ago. He had played in an instrumental group in Pittsburgh. After relocating to Kansas City, he released a wordless, ambient-guitar solo album. The guitar loops had to give way to narrative sometime, though — Kates also has a creative-writing degree.

When he officially traded ambience for pop, he stole a name from his memory bank. Years earlier, at a party, a cubicle-bound co-worker confessed that if he ever started a band, he’d call it the Sexy Accident.

That still hadn’t happened when Kates checked back in with the guy, who had moved across the country and was flattered that someone wanted to use his idea. “I think it’s a good name,” Kates says. “It’s suggestive but not literal. Though I do worry sometimes that it might make us seem smoother or more ‘Barry White.'”

The rest of the band laughs.

The Sexy Accident is more Gin Blossoms than Barry White. Guitars jangle in a ’90s, college-rock way, and Kates offers his throaty voice to rhyming scenes of lust and doomed love affairs. Still a writer at heart, Kates often explores fiction through his music, trying on the perspectives of real and imagined characters, from lovers to crooked business executives.

At sexyaccident.com, he provides a lengthy backstory for every song on the band’s 2009 album, Mantoloking. The lyrics for the group’s two previous albums — 2006’s Tourism and 2008’s Kinda Like Fireworks — are online, too.

Kates is the only member who appears on every release. This is perhaps why everyone else seems content to let him do most of the talking.

Ivory’s arrival as a keyboard player and backup singer marks the seventh incarnation of the Sexy Accident. Describing her new role, the pretty young woman says humbly, “I’m excited to be the sprinkles.” However, Kates is already talking about Ivory singing lead occasionally.

At three years, Torrence has been playing with Kates the longest; the next newest, Smith, just came onboard about six weeks ago. “We have a problem with bass players named Pat moving to Florida,” Kates says. (It has happened twice.)

He also has lost bandmates to the perennial musician’s dream of gigs that actually pay.

For Kates, profit isn’t the point at all. He just wants to share the music.

To that end, the band’s entire canon is available for free online.

And over the past few weeks, the Sexy Accident has given away nearly 1,000 copies of a three-track holiday CD. The sampler includes two tracks from Mantoloking, “A Merry Christmas to You” and “Say Goodnight,” plus a really good remix of the former.

Hardly a carol, the Christmas song concerns a guy who sees his crush kissing another man before he can admit to his feelings. A woman’s voice adds another dimension to the scene, raising the question of whether the protagonist is actually a stalker. “It seems to me that so many pop songs are whiny, and everything is sung from the same point of view,” Kates says. “I wanted to give it duality.”

Kates has never met his duet partner on that song. Michelle Plaitis plays in the Seattle band Can You Imagine with Steve Fisk, who produced Mantoloking. Fisk had her sing lead on his remix of “A Merry Christmas to You,” mixing her velvety voice amid bits of dialogue from It’s a Wonderful Life, with Kates singing backup.

The unexpected female element impressed the band so much that the Sexy Accident probably would have tried to recruit her if she lived in Kansas City.