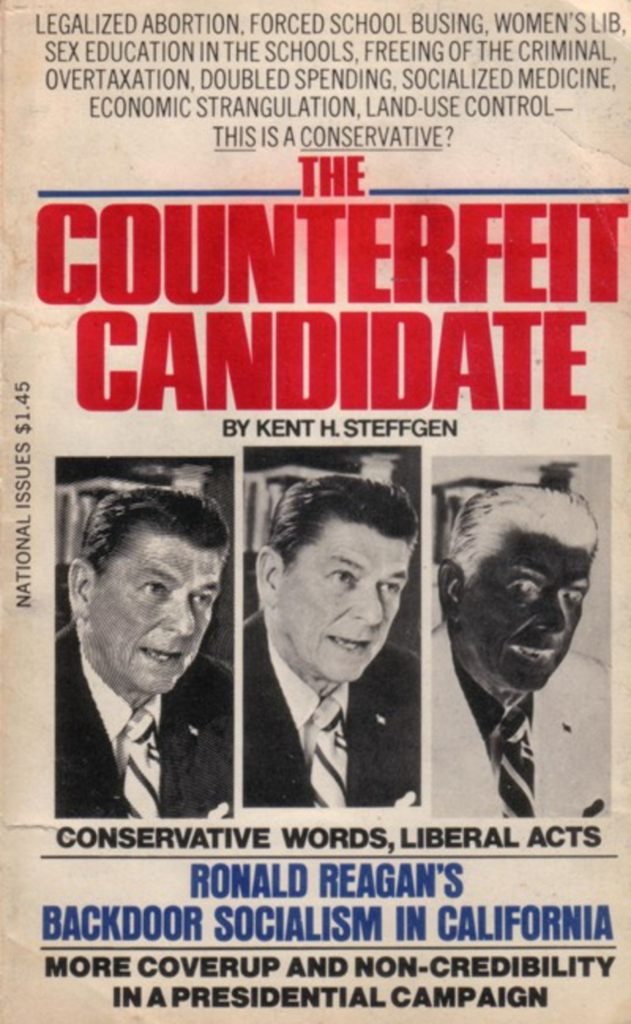 Also: Maybe it would just be easier if the fringe right had just released a list of everyone not a socialist.
Representative quotes:
“In 1969, he signed a bill to outlaw the internal
combustion engine by 1975.” (page 14)
“New York is on its way down for real. It is never
coming back; repeat, never. It will either end up a ward of the public government or in a state of anarchy, one or the other.” (page 37)

In this spurious little volume, Kent H. Steffgen assails the wrinkly ol’ nap-time godhead of the 1980s as “an impostor,” a “hopeless incompetent,” “a practicing socialist” and “the smoothest salesman socialism ever had.” He even predicts that as president Reagan would be “the biggest spender since Franklin D. Roosevelt,” which — oh, OK. We’ll give Steffgen that one.

Anyway, reading such invective, your Crap Archivist feels a naïve twinge of hope. Perhaps today’s political discoursers might learn from the past! Permit me to address directly any members of the talk-radio right who might have picked up this paper while hunting for things to be outraged by.

Do you really want to sound like this asshole?

Steffgen’s charges center on mild reforms — Medi-Cal, burning bans and others typical of the early 1970s — enacted by Reagan while he was governor of California. He derides Reagan’s support for the Occupational Safety and Health Administration as “a full-fledged attack on private enterprise,” he insists that the switch to unleaded gasoline will “bury” the state’s economy, and he visits the future to dream up the unthinkable: “It [California] is even considering a bill to outlaw smoking in all public places.”

Besides his anti-Reagan books (other titles in the Kent of the Month Club include the 1968 Ronnie bio Here’s the Rest of Him), Steffgen is best-known for his service on California’s White Citizens Council in the early ’60s. With the WCC, he protested California’s Rumford Act, a 1963 bill barring discrimination in housing. Later, the odious National Vanguard Press published Steffgen’s book The Bondage of the Free, in which the author explains that the civil rights movement is the culmination of “the most diabolic betrayal in the nation’s history.”

National Vanguard continues today to publish National Vanguard magazine. Some of its classic headlines include “Space Exploration: An Expression of the Aryan Soul” and “Albert Einstein: A Textbook Case of Jewish Media Manipulation.”

Race baiting doesn’t show up much in The Counterfeit Candidate, though Steffgen describes Reagan as the “onetime white hope for the salvation of the U.S. Constitution.” Well, that breaks new crazy ground — Reagan wasn’t even white?

Steffgen offers a few other dizzy labels for Reagan:

• “Franklin D. Roosevelt without the wheelchair”

• “the greatest snowjob ever to pass before the electorate”

Steffgen brushes up against wit for one dangerous moment when he observes, “What he [Reagan] may be in the eyes of a writer less restrained than I is anybody’s guess.”

This brings to mind one less-restrained author, who wrote: “Kent Steffgen has earned his money acting as an escort for plump old ladies and spent most of his money to buy the services of plump young men.”

That’s from a pseudonymously written document titled the “Deguello Report on the American Right Wing.” The 1976 “expose” emerged from within the white-supremacy movement. According to Jeffrey Kaplan’s fascinating Encyclopedia of White Power, the Deguello Report’s author attempted to discredit rivals by labeling them as socialist, Jewish or homosexual, a standard technique of the fringe right. (Today, we’d add “born in Kenya” to that list.)

Steffgen remains guilty of the same baseless name-calling found in the Deguello Report, but I’ll give him this much: He never calls Reagan a Jew, and he only hints at homosexuality with that “backdoor socialism” crack and the occasional erotic metaphor. Steffgen writes: “Every time Reagan signed one of those drastic measures, he had a soothing jar of Vaseline on hand to rub down the victim; a special ointment. Up with the Muzak, down with the lights, on with the logic and apologies, so the victim always managed to walk away from it half-tranquilized. Reagan was running a giant massage parlor in Sacramento.”

The 2003 book Reagan: A Life in Letters puts the Vaseline back in the late president’s hair, where it belongs. This, from a 1978 letter to Burbank voter Mrs. Buford S. Craig, reproduced in the book:

“Kent Steffgen — (whoever he is) is an unmitigated liar.”