The Rockhill Grille at 20th and Grand to open in July, Q39 expands southward, and other Kansas City restaurant news

Zach Marten and Bret Springs, of Back Napkin Restaurant Group, have announced the name of their new restaurant at 20th Street and Grand, and it rhymes: the Rockhill Grille, named for notable Kansas Citian William Rockhill Nelson. And the venue, set to open in July, won’t much resemble its last tenant, the Cashew.

The Rockhill Grille still has two levels, as did the Cashew, but all that remains of the old space its its wraparound garage doors. The first floor now features a rectangular-tiled and walnut-topped bar at its center, and there’s a glass-encased wine room at the west end of the space. The second floor, a masculine lounge, features rich wood paneling on the walls, tufted-leather couches on the south end, and high tops near the bar. Both spaces overlook the downtown skyline.

“We love old buildings,” Marten says. “The first thing we do is peel it all back to see the guts.” In the case of this building, that means lots of great exposed brick and concrete support pillars. 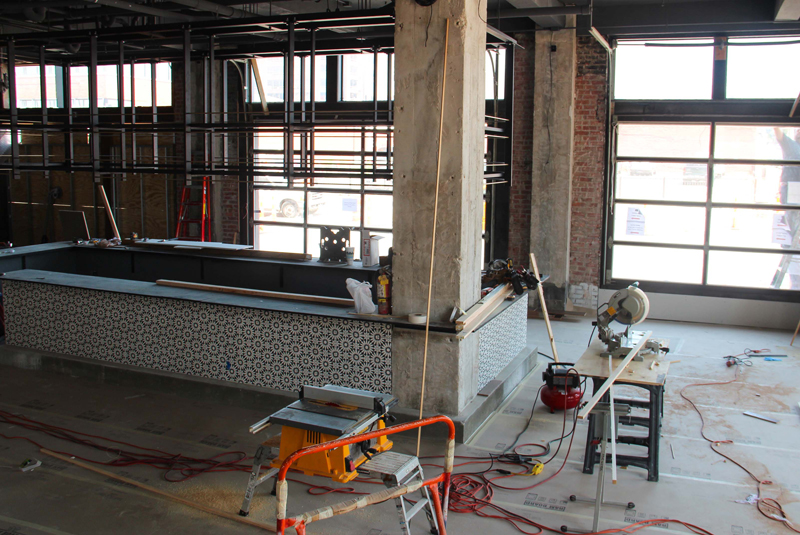 The menu will resemble that at Back Napkin’s RND Corner in Lawrence, which focuses on American basics: salads, steaks, seafood. Marten says Rockhill will replicate some of RND’s dishes but also feature oysters and a more robust appetizers selection than the Lawrence restaurant’s.
Sounds like happy hour.

Hefty barbecue news for those in the suburbs: Q39 is opening a new location at 11051 Antioch Road in Overland Park next spring, in the former Hayward’s BBQ restaurant. City dwellers also have good news: Owner Rob Magee plans to expand the original 39th Street location to include an indoor-outdoor bar and a rooftop dining space, building out the storefront space east of the restaurant.

One last bit of Q39 gossip — it sent a food truck up to Chicago last week. Friends there tell me that the rigmarole associated with setting up a food truck within city limits is significant, so perhaps this means Q39 has its eye on Chicago.

Muscle Maker Grill’s first area location is set for 14967 West 119th Street in Olathe. The straightforwardly named health-oriented fast-casual spot plans an aggressive expansion into KC, with 15 locations in the works. Imagine lots of low-fat cheese, low-carb dishes, wraps and salads. Your Crossfit- and paleo-diet-obsessed friend will probably be moving in here.

El Burrito Loco (900 Swift Avenue, North Kansas City) appears to have closed. The restaurant’s storefront is locked, with no sign offering an explanation. The crew was supposed to serve up food at the recent Big Rip beer fest but canceled shortly before the festival.

Bread and Butter Concepts is not wasting precious Plaza time. The Oliver (4807 Jefferson) will open on Thursday, June 16, after a remarkably quick turnaround from the space’s days as Republica.

Thursday 6.16
Join Cellar Rat and Lidia’s Kansas City for a progressive wine dinner tonight. It starts at Cellar Rat (1701 Baltimore) with a tasting of Anime craft beer from Italy, and then moves down the street to Lidia’s (101 West 22nd Street) for a four-course dinner prepared by chef Cody Hogan. Tickets are $69 per person and are available by calling Lidia’s at 816-221-3722.

More fried chicken! Tonight, Shawnee Town, the quaint farmstead museum at 57th and Cody streets in Shawnee, is hosting a farmstead fried-chicken dinner, complete with big tent. For $10, feast on old-fashioned fried chicken and fixings. The event begins at 5:30 p.m., and reservations can be made by calling 913-248-2360. More info can be found on Shawnee Town’s Facebook page.

Friday 6.17
Cruise up to the Jowler Creek Winery in Platte City this evening for a farm-to-table dinner. The four-course dinner, prepared by chef Jason Thomas (Wabash Junction), features cocktail and wine pairings highlighting Jowler’s wine selections. The dinner is $69 per head. Call 816-858-5528 for reservations.

Saturday 6.18
There is a lot of barbecue going down this weekend. Tonight, the Winner of TV’s BBQ Pitmasters Season 4, Rod Gray (Team Pellet Envy) and Stephanie Wilson (theslabs.com), host a barbecue-competition dinner at the 180 Room in Olathe (11944 South Strang Line Road). Tickets are $55 per person or $400 for a table of eight, and include drink pairings.

Sunday 6.19
The Rieger’s chef, Howard Hanna, is smoking ribs on the patio at Ça Va in Westport today (4149 Pennsylvania). For $50, guests will get a half-slab of ribs, sides and two glasses of rosé. The event is sold out, but it can’t hurt to check day of, in the case of cancellations.

If you don’t have luck there or your appetite is seriously robust, Plowboys BBQ (3111 Mo-7, Blue Springs) is serving all-you-can-eat ribs at its Blue Springs location. One way to make dad happy is to fill his belly.

Tuesday 6.21
Chef de Cuisine Theresia Ota at Jax Fish House (4814 Roanoke) has prepared a special, rosé-inspired menu to celebrate the summer solstice. The dinner is available from 6 to 8 p.m., and reservations are recommended.