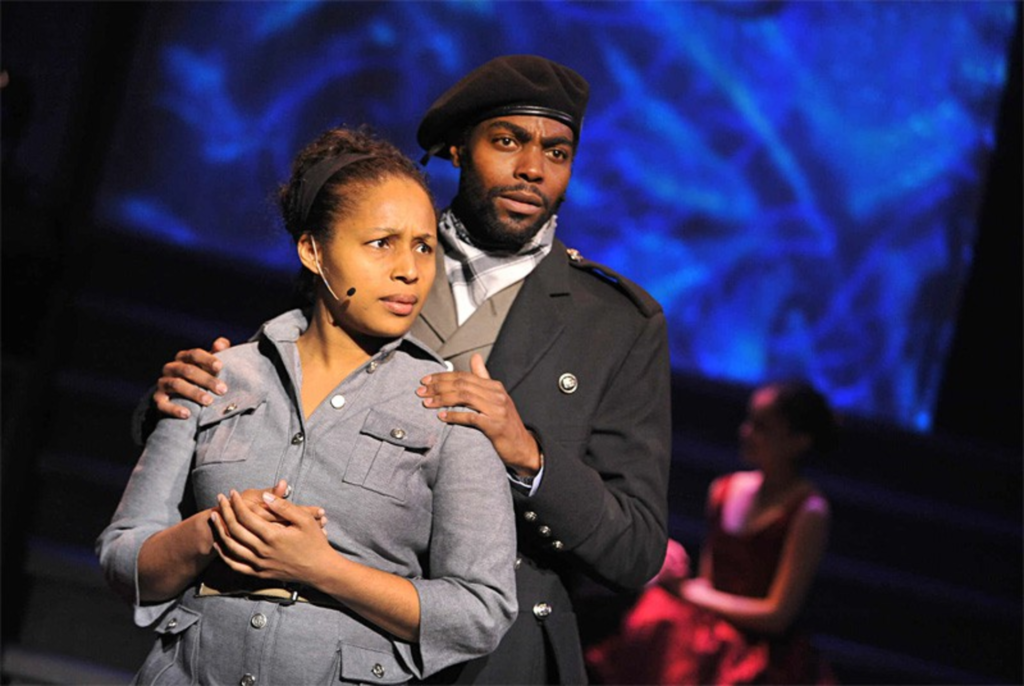 The show neither apologizes for hip-hop nor treats the music as novelty. Set in the future yet ruled by the jealousies that have always fueled human drama, Venice is scored to lean and intense synthesized loops, most played live on keyboards by Chris Kong, over Brandon Draper’s kick and snare. Cast members (playing the generals, politicos, lovers, refugees and schemers common to old-fashioned tragedies) rap, sing and holler their guts out.

Like last year’s rousing Clay, Venice is a collaboration between Eric Rosen, the Rep’s artistic director, and Matt Sax, who narrates with persuasive flow. (Rosen wrote the book and directs. Sax wrote the music. Both handled the lyrics.) This time, they’ve aspired toward something like dystopian science fiction. A generation has passed since bombings ravaged a Venice that is neither the city in Italy nor the beach hamlet in Southern California. The conflict, apparently fought along lines of race and class, has simmered for years but at last seems near some symbolic resolution: a wedding between an inspiring general named Venice (Javier Muñoz), after the city itself, and Willow (Andrea Goss), his long-exiled childhood sweetheart.

Tragedies being tragedies, and people being people, Venice’s brother Markos (Clifton Duncan) dedicates himself to undoing both marriage and peace process. His plot, like Rosen and Sax’s, calls for something borrowed and something new: a memento of the lady’s, to plant à la Iago, and an IED, to plant à la al-Qaida.

As the villain, Duncan triumphs with “Bomb Drops,” the most ferocious of the raps. (It makes an apocalyptic joke of James Brown’s old hit-me-three-times bit.) Angela Wildflower Polk blazes back to the Kansas City stage as pop star Hailey Daisy, and Uzo Aduba, playing the mother of the warring brothers in potent flashbacks, makes her gospel-flavored message songs soar. The small ensemble gathers around her and swells, singing with utter sincerity about hope in a blasted world. That’s nothing new for musicals, but in this one, that hope feels as though it matters, that the artists have dug deep and believe it.

Meghan Raham’s set, all tarps and scaffolding, smartly captures destruction as well as rebirth. Video projections by Jason H. Thompson wash out a bit on the tarps, creating a stylish, bleared effect, perfect for an exhausted city.

Rosen’s book keeps brushing up against the plot of Othello, but the enthusiastic Rep audience doesn’t need such nods toward legitimacy. This audience might not be ready to throw its motherfucking hands up at Sax’s exhortations, but it gets how an MC’s flow and iambic pentameter are just language over beats.

Occasionally those lyrics can be clumsy; the most awkward of these is I don’t know you/You don’t know me/Everybody is a threat that you see. One more complaint with a show I otherwise relished: There’s a stiff formality to the many scenes of military men reporting to their superiors, and this bleeds into the private scenes that establish the core romance. Because the audience is already occupied with working out the specifics of this setting, such stiffness is an unwelcome (and, I suspect, unplanned) distraction. I kept wondering, Is this marriage for real or is it a political ploy?

Rosen and Sax’s approach resembles sampling, where all culture is equal and borrowable. The dystopian city, whose history is revealed slowly, recalls the graphic novels of Alan Moore even while its rulers suggest the kings of Greek tragedy as well as today’s dashing pragmatists — Cory Booker, Barack Obama — whose racial identities reveal the recent history of the broken lands entrusted to them.

Sax and Rosen will throw us a line from Hamlet, a speech of Puck’s, a ghostly echo of a Temptations verse. The military dance numbers (choreographed by John Carrafa and Tanisha Scott) are pure Rhythm Nation; the looped synth strings of “City at Sleep” recall not so much Stevie Wonder’s “Village Ghetto Land” but what it would sound like if Kanye West built a beat out of “Village Ghetto Land.” And then a killer siren effect and some stuttering drum work suggest a Diplo remix of all of the above. Later, shouts of “tick, tick boom!” suggest both Rent-creator Jonathan Larson and — probably not what they were going for — Prince’s utopian goof Graffiti Bridge.

They likewise stud their collage with references to real-world troubles, evoking, without strain, Iraq, Palestine, Argentina’s dirty wars, post-Katrina New Orleans, and American white flight and gentrification, all scored to the sleek boom of hip-hop.

That’s a lot to cram into a world-premiere musical, which is a proposition that’s already risky enough. Such daring is by now no surprise for Rosen’s Rep.